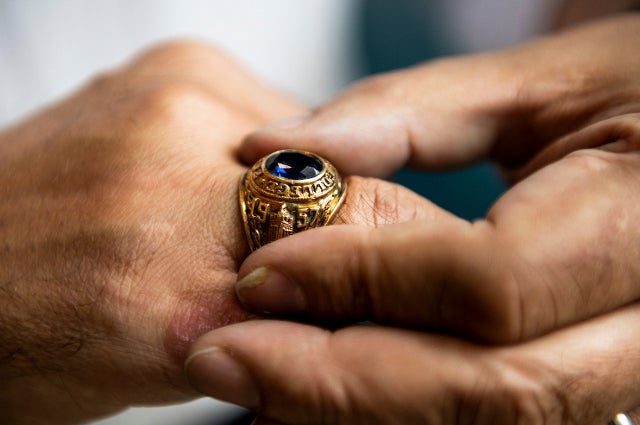 This is a story about fathers and children, things lost and found, science, and maybe just a little magic.

It begins with a glint in the sand. Earlier this year, a woman named Maggi Duncan was walking on a beach in Westerly, Rhode Island, when she saw a ring. It was a Tufts University class ring with the year 1957 and the initials HLH Jr.

Hoping to reunite the ring with its owner, Duncan sent it to Tufts. It ended up in the hands of Adam Bissonnette, an assistant director in the Office of Alumni Relations, who jumped into the investigation. In the alumni database, he found only one name from the class of 1957 with the right initials: Harold L. Howes Jr., a biochemistry major who had worked at Pfizer, the pharmaceutical company. Sadly, Harold Howes had died in Groton, Connecticut, in 1983.

But some internet digging revealed that Harold Howes had three sons named Jeffrey, Rusty, and Steve, and there was a Steve Howes in the alumni database who earned his Ph.D. in biochemistry from the Sackler School of Graduate Biomedical Sciences in 1995. Could it be the same Steve? The database didn’t note a connection between the alums, but clues from the internet suggested that the younger Howes had once lived in Connecticut, and now worked at Pfizer in Cambridge, Massachusetts.

Bissonnette passed his research to Roxanne Beal, the director of development for the Sackler School. Beal got in touch with Steve Howes, and soon determined that his father had indeed owned a class ring. “I was completely floored,” recalled Howes, who didn’t know the last time he had seen the ring. He had been just seventeen when his father had died. Yes, he and his family had gone to that beach several times when he was a child—the ring could have been lost there forty years ago, as far as he knew. 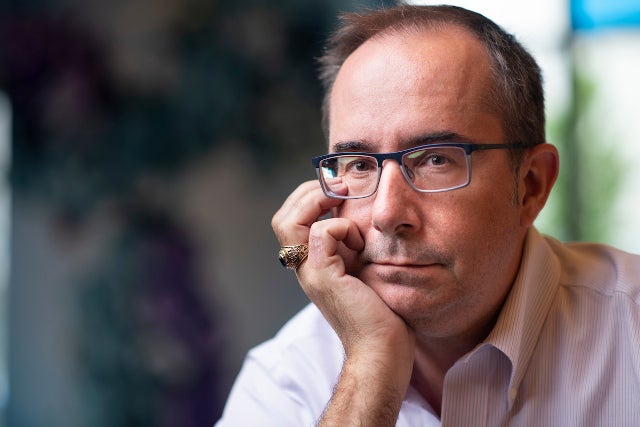 Howes said his father “inspired me to pursue science in the first place. I wouldn’t be where I am today without him.” Photo: Alonso Nichols

When Beal met with Howes in Cambridge and handed him the ring, he recognized it right away. He remembered playing with it as a boy—how it used to hang loose on his finger. “Now that I’m just north of fifty, it fits perfectly,” he said. “It was amazing.”

The ring brought back vivid memories of his father, with whom he had been very close. Harold Howes was a parasitologist, and he encouraged his son’s love of nature by buying him all the Golden Guides to animals and taking him to the Mystic Aquarium.

“He would bring me back specimens from his lab—parasitic worms in formaldehyde—which sounds gross but to an eight-year-old boy is the coolest thing in the world,” Howes said. “My fascination with biology came from him.”

Two months after Howes entered the University of Connecticut as a biology major, his father died. But his dad was never far from his mind. He decided to pursue his doctorate at Tufts, his dad’s alma mater, and ended his thesis with a dedication and a photo of the man who, he wrote, “inspired me to pursue science in the first place. I wouldn’t be where I am today without him.”

Howes went on to work at Pfizer, as his father had, albeit in a very different role as a bioinformatics expert. Had his father lived longer, he knows they would have had much to talk about, scientist to scientist. “There are lots of conversations that I missed,” he said.

Along with the flood of memories, the ring’s return to the Howes family brought a mystery: Exactly when was it lost? Howes talked to his mother, who reminded him that his brother Jeffrey had taken to wearing some of their father’s rings after Harold died. It was possible that he had seen the class ring last, could even have been the one to bring it to that beach. But Howes couldn’t ask him, because Jeffrey, too, had died much too young, in 2016. That possible connection to his brother made finding the ring all the more meaningful. 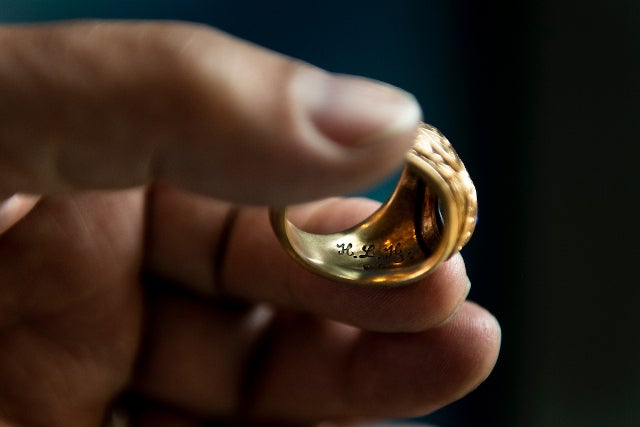 Now a father himself, Howes shared the story of the ring with his seven-year-old twins. “They listened with rapt fascination,” he said. “Then they said, ‘Papa, it’s Grandpa and Uncle Jeff! They sent it to you!’”

Although Howes doesn’t consider himself a very religious person, he enjoyed that thought. “As a scientist, I love understanding the logic behind things. I love deducing and understanding how things work,” he said. “But I also love preserving a sense of wonder, and kids help make sure that happens.”

Howes wrote a heartfelt letter to Duncan, thanking her for what she had done, and the wonder she had sparked.

“Somehow out of nowhere, a ring appears,” he said. “It seems as though either my brother, my father, or someone else was reminding me that they’re out there.”

The Story of My First Job