Students helped lead the way to the creation of the new minor in the Department of Studies in Race, Colonialism, and Diaspora 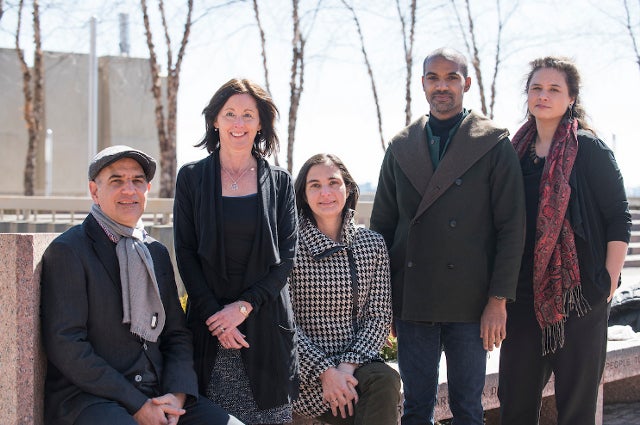 In February 2016, a grassroots campaign driven by Tufts students to change Columbus Day to Indigenous People’s Day at the university paid off when Arts and Sciences faculty approved their petition.

The students, many of whom were elected members of the Tufts Community Union Senate, were not done though. They also wanted a change in how Tufts scholarship and teaching would encompass the complex histories, struggles, and resilience of Native Americans and indigenous peoples around the world—one that would go on long after they graduated.

“We realized that a holiday name change is only one of a multitude of changes needed to be in a better relationship with indigenous communities,” said Parker Breza, A19. “So, we decided to push for more institutional reforms.”

That push succeeded. This fall Tufts marks the start of a new minor in Native American and Indigenous Studies (NAIS) in the Department of Studies in Race, Colonialism, and Diaspora (RCD).

The student-led proposal noting that existing Tufts courses demonstrate a “longstanding commitment to NAIS topics and concerns”—including classes that explore the historical and contemporary relationships between Native, African-descended, and black Indian communities—won approval from Arts and Sciences faculty in May.

Breza, who worked with fellow students in the proposal, has high hopes for the new minor. “We found in our research for the proposal that other universities had successfully created academic hubs that were also activist hubs,” he said. “They were very engaged with local communities and in fighting for justice in lots of different ways. We wanted to emulate that approach at Tufts, and to make it a place that would support these initiatives long into the future.”

The Tufts minor, now one of some 112 similar programs in the United States, is in addition to five majors and minors offered in the RDC department, in Africana, American, Asian American, Colonialism and Latino studies.

“Native American and Indigenous Studies is generating some of the most significant interdisciplinary humanities and social science scholarship today,” said Kris Manjapra, RCD department chair and associate professor of history. “We are excited to have this important field of research and study now available at Tufts.”

The RCD, which began as a consortium in 2014, was formally established as a department last November by the Board of Trustees. That new status, effective July 1, establishes a strong infrastructure for NAIS, one further buttressed by a recent $1.5 million award to RCD from the Mellon Foundation to support new faculty hires, said Amahl Bishara, director of the NAIS minor in the RCD.

“The RCD lens is a global way of thinking about Native American and indigenous studies,” she said. “It offers a framework that helps us think about that culture in terms of colonialism, obviously, how colonialism puts Native American cultures and societies in relationship to other groups—and helps us to see those categories in historical context and how they changed over time.”

The new minor also adds a critical perspective that can benefit all Tufts undergraduates, regardless of their major field, as it expands their understanding of “what it means to be a person in the United States today,” said Bishara. “To learn about the Native American presence is to be inspired by their resilience, their continuing struggle for justice, and their resistance, all of which have shaped a shared history. It’s also important for our students to imagine and learn about other ways of living.”

Darren Lone Fight, an American Studies lecturer, said that the role of Native American and Indigenous Studies is to “engage with indigenous history, politics, contemporary issues, and involve the students in the broad array of related conversations around those topics” such as tribal sovereignty, land rights, and literary/cultural production. “Any critical study of the Americas has to pay attention to these issues that are often underrepresented,” he said.

Its presence not only permeates the larger academic community, he noted, but also offers a conduit for creating relationships with local and national tribal communities, including but not limited to the Massachusetts, Wampanoag, Nipmuc, Narragansett, Pequot, Lenape, and Abenaki communities. Those relationships look promising, he noted. His tribe, Mandan, Hidatsa and Arikara Nation (also known as the Three Affiliated Tribes), for instance, recently co-sponsored a Tufts panel on the importance of NAIS programming.

“We’re already articulating relationships with other tribal nations near and far,” he said. “In addition, I’ve discussed a working relationship between the Tufts NAIS program and the North American Indian Center of Boston. They’re amenable and excited to begin building programs with us.”

The path to the NAIS minor began during the 2016-2017 academic year with a strategic focus on showing student interest. Working with Adriana Zavala, an associate professor and then director of the RCD consortium, students gauged interest in a potential program by polling the student body. Positive data in hand, they circulated a petition for establishing the new minor, and more than thirty student groups signed on.

“I can’t say enough positive things about the students who have been involved in this process,” said Lone Fight. “I have had some of them in my courses, and they are incredibly passionate about justice—it’s not an idea to them. They have a very clear sense of purpose; they know what it is going to take to get there.”

Breza said the success of the campaign speaks to the intense focus of student activists who come to Tufts already primed to drive change. Growing up in rural Minnesota, Breza was ignited in high school by “the powerful organizing of Black Lives Matter. I quickly got involved, and that became a way for me to understand all these other justice issues,” he said. “That opened a new world for me. Colonialism became one of the ways that I was able to think through a lot of the other systems related to social injustice,” he said.

Today, he said, “I’m committed to justice in all its different forms and interested in structural change. I’m part of a generation that sees that change can be made because of direct action, and that is empowering. It is clear to us that we have a voice, and that our voice matters.”