Miranda Phaal, A18, discovered an acrostic in John Milton’s classic that had gone unnoticed for more than 350 years

It’s not every day that an undergraduate makes a significant discovery about one of the most famous poems in English literature, but Miranda Phaal, A18, did just that in her senior year at Tufts. Now she has published an article about it—“The Treble Fall: An Interlocking Acrostic in Paradise Lost”—which is appearing in the Milton Quarterly.

Phaal was a history major, with minors in English and in Film and Media Studies. Three of her English courses set the stage for her discovery: my course in Vergil and Dante, which she took as a first-year student; Jess Keiser’s Milton course her junior year; and in her final semester at Tufts, Julia Genster’s Underworlds.

Milton followed Dante and Vergil in writing acrostics into his epic. In an acrostic, the author uses the initial letters of a sequence of lines to spell out a word that points toward something significant to the situation narrated. 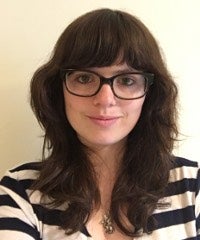 For Miranda Phaal, finding the acrostic “FALL” in “Paradise Lost” seemed to be in the cards given her last name.
Vergil, for example, marks the opening of the Gates of War in The Aeneid with four lines whose first letters read M A R S, at the moment when the god of war is about to unleash his fury. Dante has twelve tercets (three-line stanzas) spelling out V O M (uomo, man) and nine spelling out L V E (lue, plague), which add emphasis to his maledictions of human evil.

Such acrostics are in effect purloined letters hiding in plain sight, a joke waiting—sometimes for centuries—for someone to get it. Once seen, the acrostic joins writer and reader in a convocation of wit and shared insight.

The blind Milton’s most famous acrostic, first described in 1977, occurs during the “oblique,” “sidelong” movement of the snake in Book 9, in lines remarking on the beauty of the still-upright serpent as it approaches the still-unfallen Eve. The left margin, read vertically, spells out S A T A N. Since “Satan” is a name imposed by humans to replace the fallen angel’s original name, now erased from the Book of Life, this acrostic marks its invention at the very moment of Adam and Eve’s Fall.

The acrostic makes a further joke: if readers might want to criticize Eve for her gullible acceptance of Satan’s words in his serpent’s disguise, they should remember that they have apparently missed for three centuries his very name, right there in plain sight.

Phaal’s discovery occurs somewhat earlier in Book 9, when Eve argues with Adam about whether they should stay close together, having been warned by an angel about the Devil’s imminent threat, or would gain “double honor” by resisting separately whatever temptation he might offer.

Sticks no dishonor on our Front, but turns

Foul on himself; then wherefore shunn’d or fear’d

By us? who rather double honor gain

*From his surmise prov’d false, find peace within,

*Favor from Heav’n, our witness from th’event.

*And what is Faith, Love, Virtue unassay’d

*Let us not then suspect our happy State

*Left so imperfect by the Maker wise

*As not secure to single or combin’d.

*Frail is our happiness, if this be so,

In Phaal’s reading, the acrostic “entwines the double fall of man (FFAALL) with the fall of Satan (a single FALL, read from bottom to top), perhaps commenting on their shared inciter—Satan—or their shared root—pride.”

In her terse and compelling summary: “Ultimately, the acrostic distills the entire poem down to its essence: three contingent falls, two paradises lost.” Like other significant acrostics, this one once seen exerts its force, and it offers a visual marker of the imminent Fall, in all its physical and moral dimensions.

John M. Fyler is professor and chair of the Department of English in the School of Arts and Sciences.

Sculpting a Legacy: The Art and Impact of John Wilson