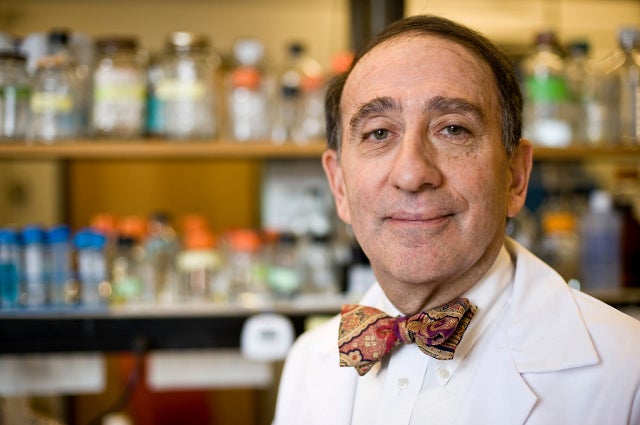 Stuart B. Levy, the emeritus professor of molecular biology and microbiology at the Tufts University School of Medicine whose pioneering research and impassioned advocacy raised awareness of the danger of antibiotic resistance, died on September 4. Levy, who had battled Parkinson’s disease and related conditions for several years, was eighty.

Colleagues, friends and family remember the scientist, who retired in 2018 after forty-seven years at Tufts, as a gifted researcher and a compassionate and humble human being.

“Stuart was a rare combination,” said John Leong, the Edith Rieva and Hyman S. Trilling Professor and chair of the Department of Molecular Biology and Microbiology. “He had a far-reaching vision of the consequences of inappropriate use of antibiotics, a keen understanding of the need for public education and policy change, an ability to communicate effectively, and a cutting-edge lab that studied the mechanisms of bacterial resistance.”

The son of a doctor who made house calls in Wilmington, Delaware, Levy grew up steeped in medicine and science. He, his identical twin brother Jay (the younger by twenty minutes), and sister Ellen all ended up pursuing careers in academic medicine.

Levy also had a lifelong interest in literature (he corresponded with Samuel Beckett), fine and performing arts (he occasionally enlivened meetings by playing the ukulele), and international cultures. An English major at Williams College, he told The Scientist in a 2015 interview that he loved the fact that he “could keep these interests and still go to medical school.”

The twin brothers enjoyed switching identities, pulling off a particularly notable prank as undergraduates that is now part of family lore. After months of preparation, including determining that such a stunt would not result in disciplinary action, they successfully executed a week-long switch, with Jay attending classes at Williams while Stuart hung out at Wesleyan, his twin’s university. More recently, at the 100th anniversary celebration of the American Society for Microbiology, of which Stuart was president, the brothers marched in identical attire on either side of a float. “Some people,” Jay recalled, “wondered how Stuart could be in two places at once.”

Levy enrolled in the University of Pennsylvania School of Medicine in 1960. While on leave as a visiting research fellow at the Institut Pasteur, he met noted Japanese scientist Tsutomu Watanabe, who introduced him to a breakthrough discovery: that resistance to antibiotics can transfer from one bacterium to another, even across species. “This was unheard of previously. It was the beginning of studies on transferrable drug-resistance genes and infectious drug resistance,” Levy told The Scientist. It was also the beginning of his own professional path.

Antibiotics, which kill or stop the growth of bacteria, offered miraculous cures for once-deadly infections, and their use became widespread. But doctors soon saw that antibiotics were losing effectiveness, as bacteria were no longer succumbing to the drugs. At the time, scientists didn’t understand the mechanisms of antibiotic resistance or the threat it posed. Today, scientists have reported bacteria that are resistant to all known antibiotics.

“People were talking about antibiotic resistance fifty years ago, but the miracle drug mentality was so pervasive that people ignored the warnings and demanded antibiotics for all kinds of things, like minor sore throats or colds, which are caused by viruses, not bacteria. It was a big problem for doctors and hospitals,” said Harris Berman, dean of Tufts School of Medicine.

Levy joined the Tufts School of Medicine in 1971 as an assistant professor in the departments of medicine and microbiology. Five years later, he published a study in the New England Journal of Medicine showing chickens raised on feed containing low-doses of antibiotics developed intestinal bacteria that were highly resistant to antibiotics. Further, these resistant bacteria could be transferred to farm workers.

The agricultural industry was skeptical. Prevailing wisdom was that low-dose antibiotics, routinely fed to promote livestock growth rather than treat disease, would result in low-level resistance—and only in the animals themselves. Levy’s work, including his 1992 book The Antibiotic Paradox: How Miracle Drugs Are Destroying the Miracle, has been credited with prompting the FDA to shift its guidelines on the use of antimicrobial drugs in food-producing animals.

In 1978, Levy’s lab showed that E. coli resistance to tetracycline is due to the bacteria actively pumping the antibiotic out of the cell. Controversial at the time, this “active efflux” mechanism is now an accepted paradigm for a critical class of antibiotic resistance and is also a mechanism for resistance to drugs that treat cancer.

Levy believed that education of scientists, clinicians, and the public was essential to preventing a looming health crisis. Although he described an early interview with Bryant Gumbel on the Today show as “uncomfortable,” he became a quotable expert sought out by leading news media.

“Bacteria have seen dinosaurs come and they’ve seen them go,” he told Dan Rather. “So we aren’t going to destroy the bacterial world. We live in the bacterial world.” He repeatedly called for “prudent use” of antibiotics, which he termed “societal drugs” because use by one person affects others. He pointed to studies showing that people living in one household were affected by the anti-acne antibiotic being taken by another member of the same household.

Recognizing that the pipeline for new antibiotics was empty, he lobbied for incentives to make discovery and development of new antibiotics economically feasible. Along with Nobel Prize winner Walter Gilbert, he founded Paratek Pharmaceuticals, which developed a new tetracycline derivative, omadacycline, to which target bacteria were not resistant. He also called for rigorous management of antibiotics at hospitals and for advanced diagnostics to identify diseases earlier and more accurately to better target appropriate antibiotic use.

In 1981, he co-founded the Alliance for the Prudent Use of Antibiotics, now part of the International Society of Antimicrobial Chemotherapy, which brought together infectious disease specialists from more than a hundred counties. “On a shoestring, he put together this worldwide network to call attention to the problem and document it. And finally, the world woke up,” Berman said.

Levy never shied away from controversy. When he advocated prohibiting antimicrobials like triclosan from common products such as soap and hand sanitizer because they left behind a dangerous residue associated with antibiotic resistance, product manufacturers protested loudly. But changes in FDA regulations ultimately vindicated him, and he had the satisfaction of seeing the United States launch a National Action Plan for Combating Antibiotic-Resistant Bacteria and the World Health Organization name antimicrobial resistance as one of the top threats to global health.

Levy’s work also inspired the new Tufts Center for Integrated Management of Antimicrobial Resistance (CIMAR) announced in March by Tufts University and Tufts Medical Center. Led by Helen Boucher, director of the Infectious Diseases Fellowship Program at the medical center and clinical professor at the School of Medicine, and Ralph Isberg, professor of molecular biology and microbiology at the School of Medicine, CIMAR will tap researchers from across the university to work alongside colleagues at the medical center.

“Stuart Levy was a towering figure,” Isberg said, “not because of his physical stature but because of the force of his ideas.”

Matching those ideas were his kindness, humility, integrity, and love of life. Describing himself as “an optimist to my toes,” he made friends all over the world, and his fluency in seven languages enabled him to support them through good times and bad, as well as meet and court his wife of thirty-five years, Cecile Pastel Levy, a native of France.

His children—Arthur, Suzanne, and Walter—recall a father who regularly tucked them into bed when they were small; read their schoolwork; taught them how to tie the perfect bow tie that was among his trademarks; shared his love of music, painting, and singing; and talked about his work without condescension or pretense, whether he was invited into their elementary school classroom or college lecture hall.

“I can’t think of even five times in my life when he wasn’t available,” said Suzanne Levy Friedman. “He was the rock.”

Leong described Levy as “confident, as he needed to be.” But, he continued, “he was always extremely gracious, never dismissive. When I arrived in 2012 [as department chair], I asked him what role he’d like, what he needed. Stuart had only one request. He wanted to lecture first-year medical students and educate them on antimicrobial resistance. He didn’t ask for more space or money. I thought that was remarkable.”