Sonia Sotomayor and the Power of Asking Why

We all need to speak up and be heard—and be willing to engage with others, the Supreme Court justice told a large Tufts audience 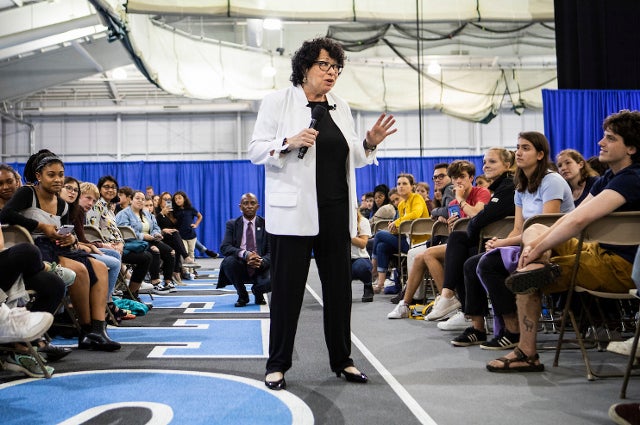 When U.S. Supreme Court Justice Sonia Sotomayor spoke to the crowd of almost 3,000 at Tufts on September 12, she told them that her success comes down to one practice everyone can do. “Engage in the world around you. Don’t be a bystander in life,” she said. “Identify the things that excite you, and go out and change the world—because you will be a much happier person, and the world will be a much better place.”

It has been an unlikely journey for Sotomayor, from growing up poor in the Bronx, where she was born and raised by a single mother, to the nation’s highest court, to which she was appointed in 2009 after serving in the United States Court of Appeals for the Second Circuit and the U.S. District Court in the Southern District of New York.

In a conversation with Tufts history professor Peter Winn, who was her senior thesis advisor when she was an undergraduate at Princeton University, and later answering questions from students, Sotomayor talked about her role as the first Latina on the Supreme Court, the critical part law plays in all our lives, the need to speak up and be heard, and the importance of listening to others, even if we don’t agree with them. After talking on stage with Winn, Sotomayor walked through the large and appreciative crowd, meeting students and answering their questions, then throwing an arm around their shoulders and posing cheerfully for photos.

What it means to be a Supreme Court justice. Asked by a student whether she felt like she was changing the norms by being selected as the first Latina Supreme Court justice, Sotomayor immediately said no. “I was scared of going to the Supreme Court,” she said. Criticism was flying her way during the nomination process, including claims that she “wasn’t smart enough” and “wasn’t very nice in court.” 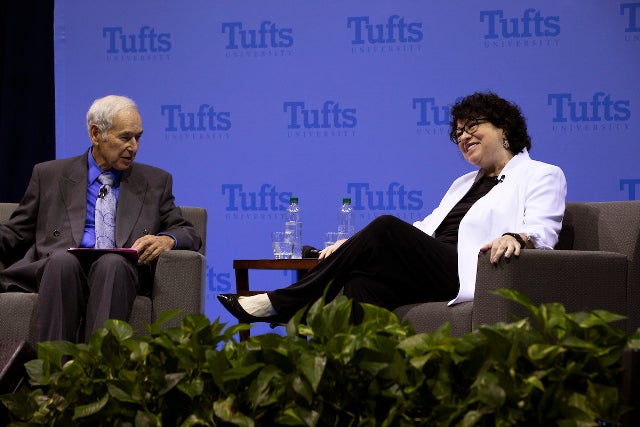 “I make mistakes, and so does the court. We are fallible,” Sonia Sotomayor said, here with Peter Winn. “We can still try to do our very best, and we can still try to help in every way we can.” Photo: Anna Miller
“All my colleagues on the Second Circuit came out publicly and said the allegations were not true, but they hurt,” Sotomayor said. “I had spent a lifetime, I thought, building up a positive reputation.”

She considered withdrawing from the process—until a Latina friend told her to stop feeling sorry for herself. “This is not just about you. It’s about my eight-year-old daughter being able to see someone like us in a position of power,” Sotomayor recalled her friend saying. “And I realized she was right.”

In the end, being a Supreme Court justice is not about having a positive reputation, or making decisions that people agree with, or even giving your own opinion on an issue, Sotomayor said. It’s about interpreting and upholding the Constitution—and the human beings doing that job are not perfect. “I make mistakes, and so does the court. We are fallible,” she said. “We can still try to do our very best, and we can still try to help in every way we can.”

We are all products of our own experiences. Should the Supreme Court be more diverse? Yes, Sotomayor said—but not in the way most people might think. “We have one Protestant, three Jews, and the rest are Catholic, myself included,” she said. “We have no justice with criminal law experience. We have no justice with environmental experience. We have only one civil rights lawyer, Ruth Bader Ginsburg.”

This worries her more than questions of race or gender diversity, she said. “I’m an amalgam of all my life experiences, just like every one of you all,” Sotomayor said. “The court needs those perspectives, not because they control the outcome of any case or issue, but because the different perspectives enrich the conversation we have.”

That’s why Sotomayor makes an effort to get out of what she calls her “little fiefdom at the court,” an existence that can often feel “monastic,” by going out and speaking with people of different ages and backgrounds. “I do want to stay grounded and stay a part of all of you, because if I’m going to participate in rendering rulings that are going to affect you, I want to know how,” she said. She speaks at colleges, but also high schools, and even grade schools, she said.

Speak out—and speak up. When Sotomayor was in law school, a friend told her: “I love you, Sonia, because you argue like a man.” She considered punching him, she told a Tufts student who asked for advice for women of color who feel ignored in public service spaces. But then she realized he might be onto something. “I think we do feel we are not heard, and I think we feel that because we don’t make ourselves be heard,” Sotomayor said. “You have to sit there and force men to listen by the persuasiveness of your argument and by its clarity. That confidence is 90 percent of what convinces people others are right.” 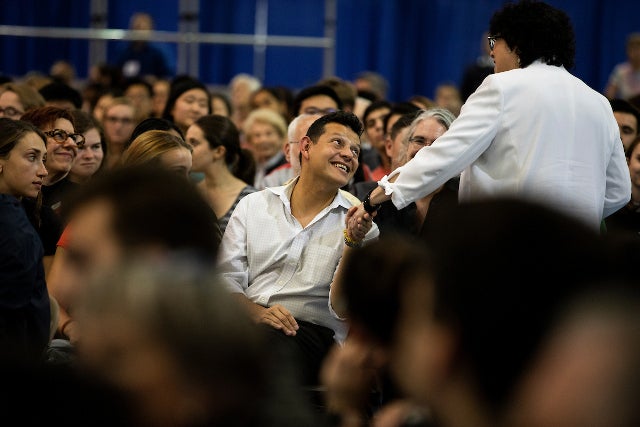 “Laws are made by men and women,” said Sonia Sotomayor. “If you don’t like them, get up and change them.” Photo: Anna Miller
Anyone who feels that their voice doesn’t count in government should think again, Sotomayor suggested. “I want you to learn about your voice in this government,” she said. “It’s there—but . . . you have to make it count.”

The law matters, too, far more than most people realize, she said. “If you don’t believe the law affects you, please remember when you stop at a red light, why are you doing that? Because the law says you have to,” she said. “It’s a smart law. But there are so many other laws that control your lives in ways you don’t consciously perceive but which are affecting you directly.”

Be a citizen, Sotomayor exhorted students—not in the formal sense of being recognized as a U.S. citizen, but by giving something of yourself to your community, by talking and writing about the issues important to you, and by voting. “Laws are made by men and women,” she said. “If you don’t like them, get up and change them.”

Don’t presume—just ask why. In a restaurant bathroom one night in her thirties, Sotomayor—who was diagnosed with diabetes when she was seven years old—gave herself an injection of insulin. A woman saw her and later whispered to someone as Sotomayor walked by, “She’s a drug addict.” After an initial moment of embarrassment, Sotomayor walked back to the woman’s table and explained she had been taking a necessary medication. “Don’t presume the worst of people,” she told the woman. “When you see them do something different, just ask them why.” 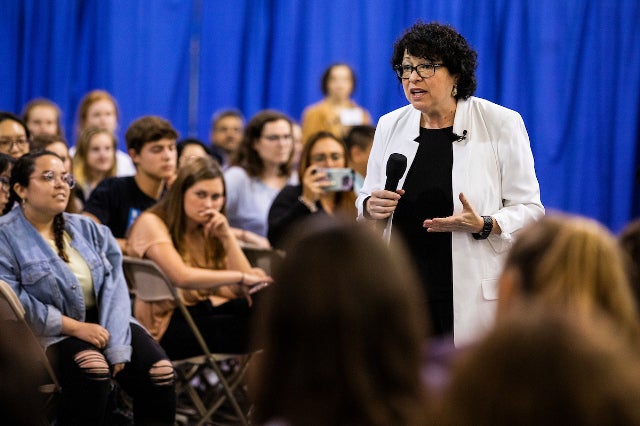 “I want you to learn about your voice in this government,” Sonia Sotomayor said. “It’s there—but . . . you have to make it count.” Photo: Anna Miller
That philosophy has informed not only her new children’s book Just Ask! Be Different, Be Brave, Be You, but her relationship with her fellow justices on the Supreme Court, Sotomayor said. They may disagree, but their “why” is the same.

“The one thing I know about every single justice, myself included, is that every one of us shares one passion: the court. We all revere the Constitution. We all care equally deeply about doing the best job we can to uphold those values,” Sotomayor said. “We may differ in how and what we believe is the best answer to do that, but I don’t mistake our differences as reflecting ill will on their part.”

Our impulse is to think someone is wrong when they disagree with us, Sotomayor said. But it’s important to remember that people think what they do for valid reasons, even if those reasons doesn’t seem as important as our own. “Our differences are there to show us that there are no clear answers, and that we have to really work at coming up with the right answers,” Sotomayor said.

What’s the best way to do that work? Keep an open mind, listen to others, identify what separates you—and do it respectfully, Sotomayor said. “If you deal with people out of respect, you can disagree agreeably. I do believe that today, our politicians have forgotten how to do that,” she said, addressing the students in the audience. “It’s my prayer that they figure out a way to do it—and I think that you guys should set the example.”