The young spider monkey was no more than a year old when her mother was killed. Poachers in Belize had shot her so they could sell the young monkey as a pet. The shotgun blast knocked the small monkey clear of the tree where she was being cradled by her mother—shattering her right arm, dislocating her tail, and peppering her body with shot pellets.

Realizing the baby monkey was too damaged to be sold, the poachers tied her up and left her. She went without food or water for three days before a concerned passerby notified the Belize Forest Department. They rushed her to the Wildtracks Primate and Manatee Rehabilitation Center, which works to protect the country’s endangered spider and howler monkeys by rehabilitating confiscated animals so they can return to the wild.

The spider monkey, now named Izzie, had a severe injury, but she had helpers from afar looking after her welfare. “It was [an open] fracture, and she had developed ulcers where the bone was protruding because she had gone without care for so long,” said Molly Reeve, VG14, executive director of Wildtracks USA, the U.S. fundraising arm of the Central American conservation group that took on Izzie’s case. “We had a lot of trouble finding a surgeon to help fix it.” 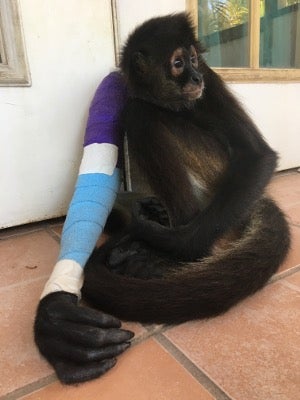 “Considering that it was questionable whether the arm could be saved, her use of it even at the current level is tremendous,” said Paul Walker, co-founder of Wildtracks. Photo: Wildtracks USA
Finally, after a month, Wildtracks found a veterinarian willing to travel to Belize for the surgery. He stabilized Izzie’s injury with an implanted metal plate, and she made a full recovery. Izzie was getting ready to be released along with four other spider monkeys when she took a tumble in their enclosure—breaking the same arm again.

Because of the size and strength of the metal plate, the bone weakened instead of growing stronger, Reeve explained. “This second fracture happened right at the base of the plate.”

Together, the two alumni hatched a plan to save Izzie. McCarthy would fly to Belize on a Saturday morning, perform the operation that afternoon in a veterinary clinic in Belize City (with Reeve transporting Izzie the few hours south from Wildtracks’ sanctuary), before flying home the next morning.

“I was at work at Tufts on Friday, and I had surgery scheduled in Massachusetts on Monday—that was the window I had to do it,” explained McCarthy, who operates a mobile surgery practice in addition to his work at Cummings School.

He packed the surgical implants in his carry-on and stowed the rest of his surgical equipment in a checked suitcase—a bag that unfortunately missed the tight connection in New Jersey. When he landed in Belize after seven hours of travel, McCarthy said, “I had the plates and screws for the arm, but no way to put them on. I had no power drill, drapes, gauze, sponges, or surgical instruments.”

McCarthy did have a Plan B, however. He knew it was possible to use a normal power tool in surgery, as long as it has been properly sterilized. “The heat of the autoclave will sort of melt a retail drill, so you can’t sterilize it more than once or twice,” said McCarthy, who finally found a suitable drill after scouring Belize City for hours in the 100-degree heat.

The surgery itself normally is fairly straightforward—comparable to doing a repair on a human arm—but Izzie’s second break was a mess. “Fresh factures are not that difficult to repair, but it’s trickier when bone has been broken for a while.” Izzie’s arm had loads of scar tissue, and the bone was in splinters. “You also can’t put metal across metal, so I had to get all the old plate off. It took quite a while,” McCarthy said.

Today, four months post-surgery, Izzie is in good spirits, and slowly but increasingly using her right arm again. “Considering that it was questionable whether the arm could be saved, her use of it even at the current level is tremendous,” said Paul Walker, co-founder of Wildtracks. He said Izzie’s use of the arm looks likely to grow as she gains more confidence and that, even though her arm use will have to improve significantly for her to pass suitability-for-release assessments, returning to the wild “is by no means off the cards at this stage.”

Wildtracks has taken in 132 confiscated howler and spider monkeys—and already released seventy-three—since Belize adopted a zero-tolerance policy for the illegal trafficking of monkeys as pets in 2012.

“We just released our first group of four spider monkeys in Belize earlier this year, around the same time I went down there with Rob for Izzie’s surgery,” Reeve said. “They have a huge territory and move quickly, but so far, so good. Izzie is a special monkey. Hopefully, she will someday be a part of that.”