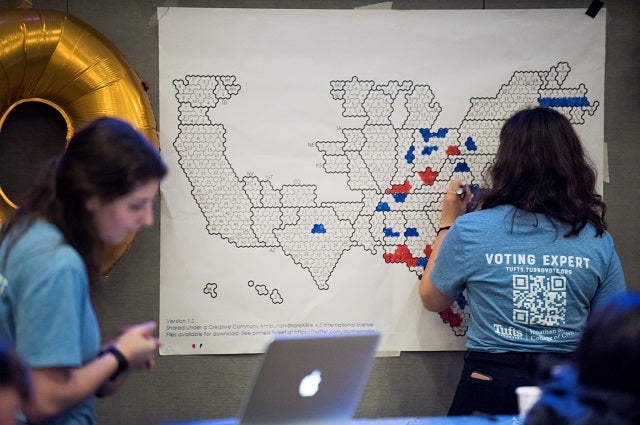 MEDFORD/SOMERVILLE, Mass. (Sept. 19, 2019)—College-student voting rates in the 2018 midterm elections doubled compared to the 2014 midterms, marking a watershed election year for student voter turnout, according to a report today from the Institute for Democracy & Higher Education (IDHE) at Tufts University’s Tisch College of Civic Life. The report, Democracy Counts 2018, is based on an analysis of the voting patterns of more than 10 million college students on more than 1,000 campuses participating in the National Study of Learning, Voting, and Engagement (NSLVE).

In 2018, the Average Institutional Voting Rate (AIVR) among campuses in the study was 39.1 percent, nearly 20 percentage points higher than 2014’s average turnout rate of 19.7 percent. Turnout increases were widespread, with virtually all campuses seeing an increase over 2014.

“At a time of increased activism and voter participation by all Americans, today’s report highlights even greater interest among college students. It marks a watershed election year for student voter turnout, including promising progress in narrowing some persistent turnout gaps,” said Nancy Thomas, director of the Institute for Democracy & Higher Education at Tufts University’s Tisch College. “College students today are more diverse than ever, and while they are not a monolithic group, they represent a formidable voting bloc of nearly 20 million.”

“While more work remains to fulfill higher education’s mission to educate for democracy, it is clear that colleges and universities provide a valuable space for political learning, civic engagement and electoral participation,” continued Thomas. “Being for democracy is not a partisan agenda.”

Today’s report is based on the National Study of Learning, Voting, and Engagement (NSLVE), conducted by IDHE, which is the only national study of college-student voting. NSLVE examines voter turnout by comparing college campuses of different regions and types, and by comparing across student demographics and fields of study. It is based on the voting records of more than 10 million students at more than 1,000 colleges and universities in all 50 states and the District of Columbia; IDHE does not receive any information that could individually identify students or how they voted. The study provides reports to participating colleges and universities, which will be distributed this week and used to support political learning and civic engagement, as well as to identify and address gaps in political and civic participation.

In the coming months, Tisch College researchers will use these data to examine important factors in campus political learning and voting in the run-up to the 2020 elections and beyond.

Researchers are available for interviews and/or analysis. Please contact Jen McAndrew at jennifer.mcandrew@tufts.edu or 617 627-2029.

Part of Tufts University’s Jonathan M. Tisch College of Civic Life, the Institute for Democracy & Higher Education (IDHE) is an applied research center focused on college and university student political learning and engagement in democracy. IDHE researchers study student voting, equity, campus conditions for student political learning, discourse, participation, and agency for underrepresented and marginalized students. IDHE's signature initiative, the National Study of Learning, Voting, and Engagement, or NSLVE, (https://idhe.tufts.edu/nslve) is a service to colleges and universities that provides participating institutions with tailored reports of their students' voting rates. Launched in 2013 with 250 campuses, the study now serves more than 1,000 institutions in all 50 states and the District of Columbia.

The only university-wide college of its kind, the Jonathan M. Tisch College of Civic Life (http://tischcollege.tufts.edu/) offers transformational student learning and service opportunities, conducts groundbreaking research on young people’s civic and political participation, and forges innovative community partnerships. Its work is guided by two core beliefs: that communities, nations and the world are stronger, more prosperous, and more just when citizens actively participate in civic and democratic life; and that higher education has a responsibility to develop the next generation of active citizens.