A Perfect Storm of Antisemitism 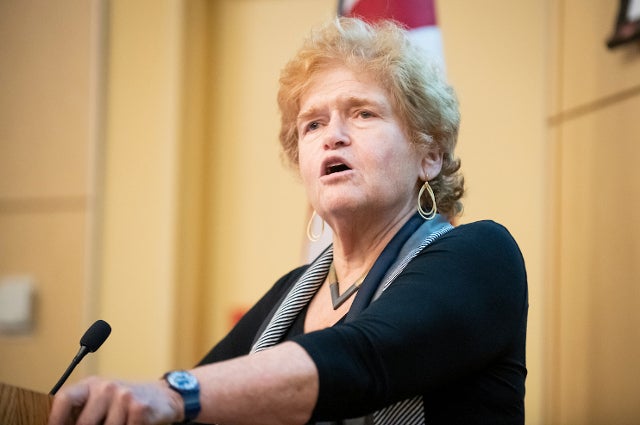 The world currently faces “a perfect storm of antisemitism,” writer and Holocaust historian Deborah Lipstadt told some 250 people at Tufts on September 17.

Lipstadt, the Dorot Professor of Modern Jewish History and Holocaust Studies at Emory University, has written six books, including her most recent, Antisemitism: Here and Now, published in January. Her talk was part of the School of Arts and Sciences Dean’s Lecture Series.

“In discussing contemporary antisemitism this afternoon, Professor Lipstadt will not be describing an abstract problem, but something that we must actively confront and resist every day in our own lives,” said Tufts President Anthony P. Monaco. Lipstadt’s talk came just one day after a Jewish student found a swastika attached to his Tufts residence hall room door.

Antisemitism overlaps with other prejudices, but has its own unique template. Some people claim they know antisemitism when they encounter it, yet can’t define it, Lipstadt told the audience. “But actually you can define antisemitism,” she said. Antisemitism connects Jews with three key characteristics: money or financial power; the power to use those finances in “a nefarious, deleterious, malicious way”; and cunning—intelligence used nefariously. “You want to know if someone is just being obnoxious or if they’re engaging in antisemitism, and you can sort of look for this template—it generally applies,” she said.

By contrast, racists see people of color as lesser than them, Lipstadt said. “So the racist punches down. The antisemite, who is generally the same person as a racist . . . looks at the Jew and sees someone who is wealthier than, smarter than—but in a cunning way, more evil than,” she explained. “So the antisemite punches up.”

Antisemitism is a conspiracy theory rooted in Middle Ages Christian teachings. In the Middle Ages, as Christian church leaders sought to differentiate their religion from Judaism, their interpretation of the New Testament vilified Jews, casting them as demons, Lipstadt said. In the Bible, Lipstadt said, only the devil or a demon could harm God. At the same time, “you don’t know that you have encountered [the devil] until after you’ve encountered him. He’s long gone, but the damage is done,” she said.

Such teachings created a foundation for “the conspiracy theory that is antisemitism,” she said. The theory and its language evolved beyond the church to influence thinkers and movements. “And it continues to perpetuate today,” Lipstadt said. She noted that nothing worries her more about antisemitism than this. “The minute you believe in conspiracy theories . . . you begin to lose faith in those democratic institutions which are at the heart of the society in which we live,” she said. “So this is a danger not just to a particular group, but far more to the society in which we live.”

“A perfect storm” on the right and the left sets apart today’s antisemitism. Antisemitism threads through the political right—especially the far right’s white supremacy and white nationalism. But it also permeates today’s political left, including the British Labour party, Lipstadt said. The right’s antisemitism tends to be more violent, while that of the left is more institutional, she added. She also sees antisemitism in Muslim extremism, and “we see it in portions of the Muslim community, particularly in Europe,” said Lipstadt. Moreover, social media hastens the spread of ideas, and many of today’s world leaders fail to condemn hateful rhetoric and acts. “So we see this perfect storm coming from different directions.”

“Dinner party” and “clueless” antisemites deepen the problem. When Lipstadt was a child, a store owner told her father that some of his best friends were Jews. “You will never hear someone boast, ‘Some of my best friends are White Anglo-Saxon Protestants,’” her father, upset, told her later. With this and other anecdotes, Lipstadt illustrated what she called the “clueless antisemite” and the “dinner party antisemite.” “To some degree, that is the most dangerous,” she said, “because the person doesn’t even realize—isn’t even aware of—what they are engaging in, what they are doing.”

Referencing the recent antisemitic incident on campus, Lipstadt issued a final caution. “No genocide ever began with action. Every genocide begins with words,” she said. “Not everybody hears the words. Not everybody who speaks the words will go on to be a genocider, a committer of genocide. But everyone who does, who goes on to do evil, will have started with words. Words count.”

Heather Beasley Doyle is a freelance writer based in Arlington, Massachusetts.