Older people, those with lower income, and those with less education face greater hurdles 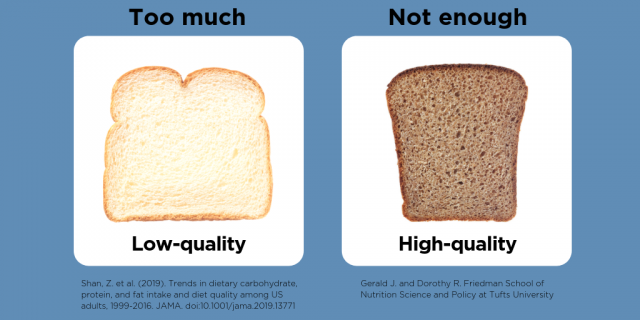 Despite years of steady advice and guidance on healthy eating, a ‘report card’ on the American diet shows adults are still consuming too many low-quality carbohydrates and more saturated fat than recommended, according to researchers at the Friedman School of Nutrition Science and Policy at Tufts University and the Harvard T.H. Chan School of Public Health. The study, published today in JAMA, looked at dietary trends over an 18-year period.

Although the study identified some dietary improvements, it also found that low-quality carbohydrates from refined grains, starchy vegetables, and added sugars accounted for 42 percent of the typical American’s daily calories. High-quality carbs, from whole grains and whole fruits, accounted for only 9 percent. Over the study period:

The study authors note that any dietary improvements were less pronounced for older people and those of lower income or educational attainment:

“Although there are some encouraging signs that the American diet improved slightly over time, we are still a long way from getting an ‘A’ on this report card. Our study tells us where we need to improve for the future,” said co-senior author Fang Fang Zhang, nutrition epidemiologist at the Friedman School of Nutrition Science and Policy at Tufts University. “These findings also highlight the need for interventions to reduce socioeconomic differences in diet quality, so that all Americans can experience the health benefits of an improved diet.”

The study drilled down into consumption trends of specific nutrients, such as plant-based protein and saturated fatty acids, which the researchers said provide insights on how changes in food sources might offer health benefits.

“For example, most of the proteins that Americans consumed were from meats—including red and processed meat. Proteins consumed from seafood and healthy plant sources, such as whole grains, nuts, and legumes, remained a much smaller proportion,” said co-senior author Shilpa Bhupathiraju, research scientist at the Harvard T.H. Chan School of Public Health, also with Harvard Medical School and Brigham and Women’s Hospital. “Our research suggests that Americans have an opportunity to diversify their sources of protein to include more seafood, beans, soy products, nuts and seeds.”

“Because low-quality carbs are associated with disease risk, taking in higher-quality carbs could mean better health for Americans in the future,” said first author on the study, Zhilei Shan, nutritional epidemiology fellow at the Harvard T.H. Chan School of Public Health. At the time of this study, he was also working under the auspices of Tongji Medical College, Huazhong University of Science and Technology, Wuhan, China.

The study examined the diets of 43,996 adults using data from the National Health and Nutrition Examination Survey (NHANES). Participants are representative of the national adult population and completed at least one valid 24-hour dietary recall from nine consecutive cycles of the NHANES (1999 to 2016). Researchers used the USDA’s Food and Nutrition Database for Dietary Studies (FNDDS) to estimate nutrient intake. To assess overall diet quality, the researchers used the Healthy Eating Index (HEI)-2015, which measures adherence to the 2015-2020 Dietary Guidelines for Americans.

Limitations of the study include the fact that self-reported food recall data is subject to measurement error due to daily variations in food intake, but steps were taken to improve estimates.