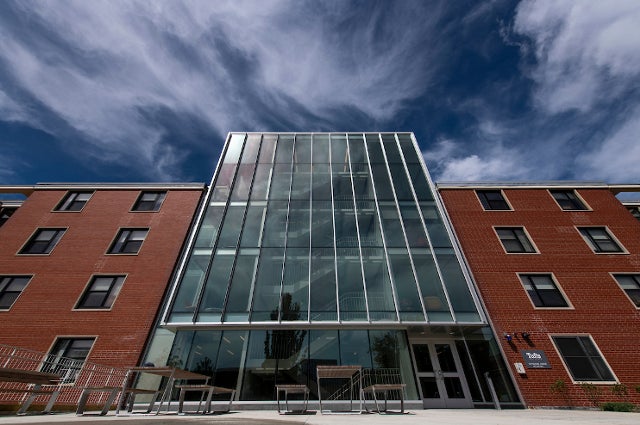 Tufts this summer put the finishing touches on multi-year housing program that has brought significant improvements to most major undergraduate resident halls on the Medford-Somerville campus.

The program, while tackling practical maintenance issues such as roofs, venting, and masonry repairs, also responded to recommendations from the Residential Strategies Working Group that included an emphasis on creating social spaces that support a sense of community.

Tufts invested $94 million in the program over the past five years, though the university began investing in needed maintenance in housing in 2010, according to Lois Stanley, director of campus planning.

More than thirty residential facilities have benefitted, ranging in age from West Hall, built in 1872 and Tufts’ longest continually used dormitory, through upper and lower campus dormitories that sprang up to accommodate growing student body from the 1950s into the 1970s, and all way to the present moment with CoHo, for collaborative housing, which has brought online fourteen wood-frame houses.

“Thus far, the progress on our housing program is a significant accomplishment,” said Stanley. “Not since the 1970s has Tufts invested as much time and funding into undergraduate residential facilities. Furthermore, I believe that residential experiences will benefit from that intensified attention due to the addition of social and study spaces where possible, the addition of apartment-style housing, and furniture selection based on student input.  I think it’s fair to say that the majority of Tufts residential halls have never been in better shape or looked better.” 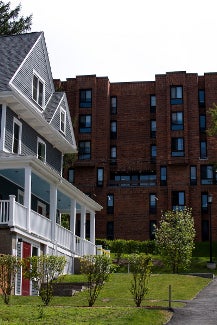 One of the wood-framed residences that is part of the CoHo development, with Wren Hall in the background. Photo: Alonso Nichols
To bolster energy efficiency, halls were outfitted with LED lighting and new windows, and where roofs were replaced, enhanced insulation was installed. Solar panels are also incorporated into Lewis Hall and Sophia Gordon Hall.

Interior work brought modernized living spacing, including rooms and kitchens. Bathrooms were made accessible, and Tufts increased the number of gender-neutral and single-use bathrooms.

Some of the most striking transformations happened in common areas, said Gretchen Von Grossman, director of capital programs.

“The common spaces in Bush and Tilton are really lovely,” said Von Grossmann. “They have wood-looking vinyl flooring and wood accents throughout. We’ve added quality furniture in different configurations and brightened kitchens that also have an eat-at counter and room for a dining table. It’s a more of a homey set up. There are spaced where students can gather and socialize.”

Each and every dorm, said Von Grossmann, required a specific, detailed approach. Richardson House, built in 1857 and a stately wood-frame house on Professors Row, was given a makeover with new siding and windows and an entry and first floor that is now fully accessible. At Stratton, constructed in 1927, the exterior work spanned two summers and included improved site drainage and foundation. A third summer allowed for the full interior renovation—bathrooms, common spaces, plus the reclamation of a formerly damp lower level for bedrooms and an accessible entry connecting to a lift serving the garden and first levels. 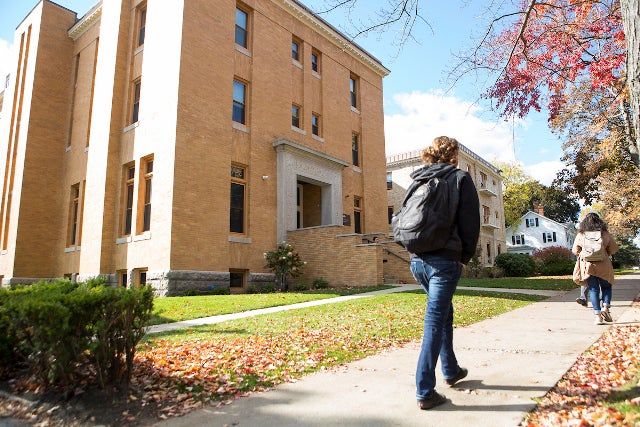 The two residence halls flanking Carmichael Quad—Houston (1962) and Miller (1959)—had facelifts that transformed their box-like appearance. They both now boast soaring glass façades at their entrances and new student lounges in the central core of each building. The lounges aim to improve the social atmosphere of both dorms by expanding student access to multipurpose space for studying, socializing, and events programming.

Recommendations of the Residential Strategies Working Group also included increasing the number of beds for students. To date Tufts has added 437 beds by reconfiguring large rooms and other spaces, and by developing CoHo to expand housing options for upperclassmen. Work on CoHo started in fall 2018 on the northern edge of the Medford/Somerville campus, and has added 141 new beds.

Focused on creating more on-campus housing for juniors and seniors, the project involved renovating and converting thirteen wood-frame houses into residences, plus constructing a new sustainability-themed house. Students moved into five houses in September 2018 and three in January; all remaining renovations, plus the new house, are now complete. (See “Creating a New Campus Community.”)