The Linebacker with a Caring Touch

As a football player, senior Greg Holt plays hard, and as a sociology major, he’s seeking to understand the world to make it a better place 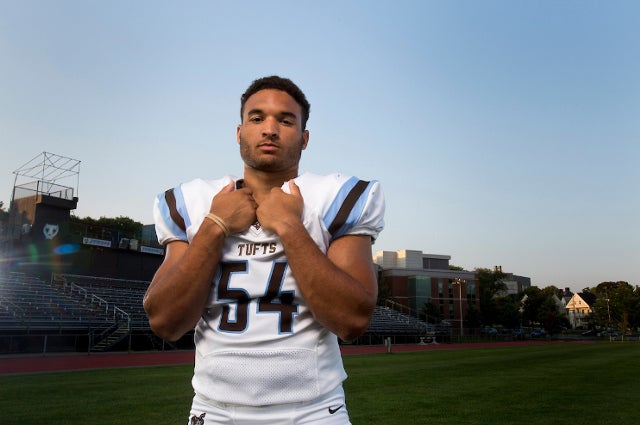 Greg Holt may not project the typical image of an all-star linebacker. At 5’10”, he’s undersized, and he’s mild-mannered by nature. But Holt, a senior co-captain of the Tufts football team, has been proving his worth since the day he first put on a Jumbo uniform.

That day was September 24, 2016—the first night game at home in Tufts football history, against Wesleyan University. Holt finished with fourteen tackles in his collegiate debut, introducing himself as an aggressive tackling machine who would be one of the best defensive players in the New England Small College Athletic Conference (NESCAC) over the next four years.

“His ability to go sideline to sideline and make tackles is as good as I’ve seen,” said Tufts head coach Jay Civetti, who worked at the Division I level prior to coming to Tufts.

Holt went on to make ninety-eight tackles as a freshman, leading NESCAC and earning Rookie of the Year and first team All-Conference accolades. He received All-Conference first team honors as a sophomore and junior as well, and last season he was a New England Football Writers Association Division II-III All-New England selection. He’s averaging nearly ten tackles per game in his career and should surpass 300 total tackles this season. 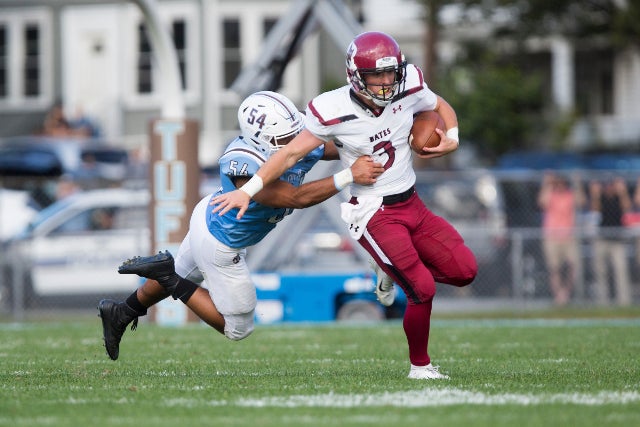 “Our goal as a defense is to just execute the best we can,” said Greg Holt, here sacking Bates quarterback Brendan Costa on September 29, 2018. “We want to be real students of the game and understand what we’re doing.” Photo: Alonso Nichols
But Holt is at Tufts to do more than make tackles. He’s here to make the world a better place, committing himself to helping those in need.

His social conscience has a lot to do with why he’s at Tufts in the first place. From Temecula, California and Linfield Christian High School, he initially had aspirations to play Division I football. He committed to a Division I school in Massachusetts, but could sense that it was not very enthusiastic about him due to his size.

Tufts came into the picture late. Holt recalls Civetti telling him that he was impressed with Holt’s football ability, but more importantly, by the things he did in the community and the person he was. Without even visiting campus, Holt signed on to be a Jumbo.

“Talking to Coach Civetti and seeing how important it was to him to build a team around being a good person in the community, which was really important to me in high school, that was a deciding factor,” Holt said. “I could tell how passionate he was about it.”

One of the first things Holt did when he came to Tufts was volunteer with the Boston Rescue Mission, an organization founded in 1899 that feeds the hungry, shelters the homeless, and provides life-transforming services to those in need. New in town, he took it upon himself to volunteer to prepare and serve meals and spend time socially with the members of that community.

Holt has always been passionate about serving the community. His father Greg grew up in South Central Los Angeles and the family often visited relatives in that area. A vision of the homelessness and despair that he would see as soon as they got off the highway in South Central has stuck with Holt. That, along with his parents, has inspired his spirit of giving.

In addition to his work with the Boston Rescue Mission, Holt has been a Big Brother during his time at Tufts. During the summer 2018 he did an internship as a housing counselor with Action for Boston Community Development.

With his talent on the field and generosity off it, it’s not hard to see why Holt has been elected a captain of the Jumbos for two straight years. His teammates mean everything to him, he said. In fact, they are the reason that he can flick the switch from the mild-mannered gentleman off the field to a tackling terror on it.

“Knowing that you’re playing not for yourself, but to see your teammates be successful and happy, that’s always in my mind,” Holt said. “My teammates are my family members, so when another team comes out and they’re trying to take away everything that your team has worked for, in my mind that’s what makes me want to do anything it takes to help my team be successful.”

And successful they have been. Holt and his freshman classmates were part of Tufts’ 7-1 season in 2016, the best record by the program since 1998. That set the tone for a run of success that has seen the Jumbos post a 20-8 record during Holt’s career. An unselfish defense has been a key part of the success.

“Our goal as a defense is to just execute the best we can,” Holt said. “We want to be real students of the game and understand what we’re doing. Nobody’s looking out for themselves. We focus on executing as a whole and being able to play as soundly as a unit as we possibly can.”

Holt’s leadership skills are not limited to the football field. A sociology major, he participated as a research assistant in a field experiment examining labor market discrimination conducted by sociology assistant professor Felipe Dias. Holt has also taken three classes with Dias.

“One of the tasks for the research project that Greg worked on entailed sending out experimentally manipulated job applications and recording information from job postings,” Dias said. “Greg took on the leadership to ask questions and ensured that other team members were aware of my suggestions and advice. This helped increase the quality of the data collection and build team work.”

Like many seniors early in their final year of college, Holt isn’t entirely sure what’s next. But he’s certain that his last-minute decision to come to Tufts has set him up for the future.

“Coming to Tufts was probably the best decision I ever made,” he said. “Getting to play Division III football and compete at a high level and getting a great education, and then realizing that you still need to be a member of the community and it’s important to do those things, at Tufts you get the mix of all those.”

Director of Athletics Communications Paul Sweeney can be reached at paul.sweeney@tufts.edu.