A convicted felon shares his story of earning a Ph.D., becoming a professor, and advocating for reforms that support successful re-entry 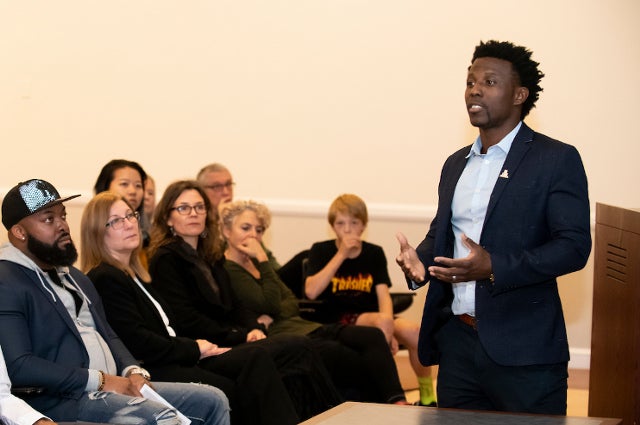 Stanley Andrisse had just graduated from college when he was sentenced to ten years behind bars in a Missouri maximum-security prison.

In some ways, he was fortunate. He could have gotten twenty years-to-life for accumulating three felony convictions, two of them Class A drug trafficking charges. A prosecuting attorney portrayed him as a career criminal. “She saw me as someone who should be thrown away for life,” he recalled. When he walked free, he was still a young man with a future.

But even as he savored the first joys of freedom, he faced the stigma that comes with being formerly incarcerated. “I couldn’t really run; it was like I had chains on my feet,” recalled Andrisse, whose applications to graduate school were rejected. But heavy as those chains were, he would eventually break them with a “big heavy dissertation.”

“Higher education,” he said, “was this transformative tool for me.”

Transformative—and empowering. After a supportive mentor vouched for his ability and, most importantly, with his hunger to learn, he was admitted to Saint Louis University and went on to earn a Ph.D. in biology, followed by a postdoctoral fellowship in endocrinology at Johns Hopkins Medicine. Today he is an assistant professor of medicine at the Howard University College of Medicine and adjunct assistant professor at Johns Hopkins, where he is an endocrinology researcher.

Still, Andrisse does not take this upward trajectory for granted. He has used his struggle as a springboard for advocacy as executive director of From Prison Cells to PhD, a nonprofit mentoring organization for incarcerated and formerly incarcerated individuals with tutoring and coaching.

It was in that capacity as an outspoken change-maker that Andrisse shared his story as keynote speaker at the student-run, two-day symposium Engaging Justice: Inside/Outside Prison, organized by Tufts University Prison Initiative at Tisch College (TUPIT) on October 3 and 4 on the Medford/Somerville campus.

The second annual conference built on the momentum of prison education programs that mark Tufts as an innovative leader in the field. Hilary Binda, AG03, founder and director of TUPIT, initiated and runs the Inside-Out program, through which undergraduates study with a select group of men serving sentences at a maximum security prison in Shirley, Massachusetts.

In addition, through a productive partnership with the Massachusetts Department of Correction, TUPIT has developed a full college-in-prison program at MCI-Concord in collaboration with Bunker Hill Community College. Incarcerated students earn an associate’s degree by taking Tufts courses from Tufts faculty, supported by undergraduate and graduate student teaching assistants.

Binda, a senior lecturer in Women’s, Gender, and Sexuality Studies, said that educating the Tufts community about initiatives that are changing education and employment opportunities for those incarcerated is only one part of the symposium’s goal.

The TUPIT college-in-prison program “contributes to cultivating Tufts as a space where people who have experience with incarceration feel invited and ultimately at home,” she said. “We hope to one day welcome more people from communities with high levels of justice-involvement to Tufts as students, employees, and community members.”

Andrisse’s presence at Tufts, she said, is a step in that direction. His personal journey breaks down “ideological barriers shaping the ways that we think about race and class, incarceration, and education,” she said. And because he also visited MCI-Concord during the conference, he provided students there “a new sense of possibility and a new way of valuing oneself as a thinker and a leader in one’s community.”

Getting a Second Chance and Running with It

Andrisse grew up in Ferguson-Florissant, Missouri. He started selling drugs even before he was a teenager. “I was fourteen years old when I was arrested for the first time, and I continued to make poor decisions to the point that I was in and out of the juvenile system,” he said.

During his time in prison, he experienced an “emotional rollercoaster” when his father, with whom he had lost contact, had multiple surgeries related to Type 2 diabetes; he would eventually have both legs amputated. “He literally ended up being half the man I knew him to be, and he ended up losing the battle with diabetes before I had the chance to reconnect with him,” he said.

The struggle inspired Andrisse to learn more about the disease. He read his first article on diabetes in prison, and recalled it was difficult to understand some of the words, much less the science. But he was fortunate to have a mentor who saw his potential to learn.

“He put money on my books and met with me on the phone for hours,” he said. “When it was time to come home, education was something I was passionate about, and it took months and months to put together college applications. . . . I was rejected from every single place except for Saint Louis University. [They] offered me a second chance, and when I got that second chance, I just ran with it.”

Programs and policies that support access to employment and higher education for those incarcerated are proving to be worth the investment, he said, because they significantly reduce the rate of recidivism. A RAND study reported that incarcerated people who participate in any educational programs in prison are 43 percent less likely to return to prison than those who don’t. Those who take college courses and earn a degree have approximately 1 percent rate of returning to prison.

Andrisse is hoping that movements like the “Ban the Box” campaign, which requires employers to remove criminal records questions on a job application, will continue to be adopted across the country.

“Clearly education is helping the individual, but it’s also helping society,” he said. When incarceration is tied to education, “you inherently [support the growth] of someone who has strength and credibility . . . who is now equipped to make change in their lives, in the lives of their family, and in the lives of everyone.”