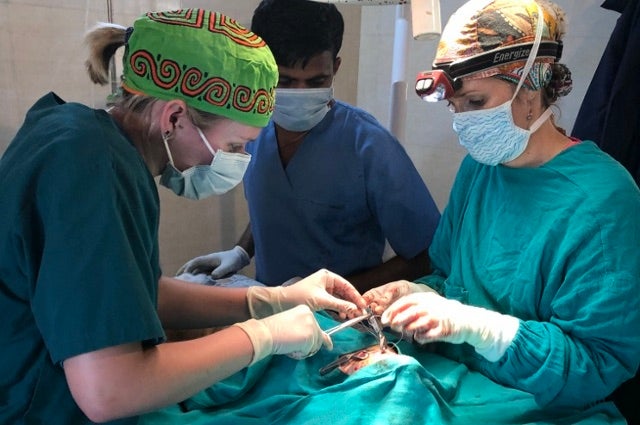 The case in India was unlike any a veterinarian or veterinary student would routinely see in the United States, said Katie Holmes, V13.

The emaciated female dog was found on the side of the road with severe injuries from being struck by a car. Someone brought the dog in to All Creatures Great and Small, an animal sanctuary about a ninety-minute drive outside of New Delhi, India.

“I saw this pink thing hanging down underneath her,” recalled Holmes of her first look at the patient. “I thought it might be her intestines, but it was her distal femur sticking out.” She explained that the dog’s thigh bone had been completely dislocated from her lower leg at the knee joint, the flesh completely torn away. On the dog’s opposite “good” side, her rear leg was wounded so deeply that bone marrow was exposed.

The stray’s dire condition made her a horrible candidate for anesthesia. But death was certain without intervention. Holmes and the students put the dog under, amputated her unsalvageable leg, flushed out her wounds, and closed her up as best they could on her other side.

Assisting Holmes with the amputation “was the most amazing thing to do, especially considering I only have a year of vet school under my belt,” Pohly said.

“Those were the first sutures the students had ever put in a live animal,” Holmes added. 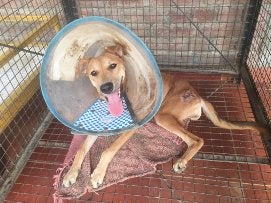 Tres recovering from surgery.
The dog—since named Tres by sanctuary workers—survived. Holmes shared a cellphone picture of Tres taken just five weeks after surgery. The dog’s once-skeletal frame had filled out from regular feedings, and she looked bright-eyed and happy.

“She wanted to live, you know?” said Holmes. “And we helped facilitate that.”

Since Cummings School’s international service program launched this February, six veterinary students have traveled on four trips to partner sites in India, Ecuador, and Kenya. Holmes, president of the alumni association, has used her time off to serve as the veterinarian mentor on two of them.

Teaching students and seeing animals suffering extreme conditions might seem an odd way for a veterinarian to relax. But Holmes said the travel is rejuvenating. Each service trip reaffirms her gratitude for all the privileges she enjoys in the U.S.—and makes her appreciate even more how her veterinary skills make such a difference for sick and injured animals.

“I went on that trip to India feeling so stressed out from the daily grind,” Holmes said, “and came back feeling like, ‘Oh yeah, this is why I went to veterinary school.’” It’s a feeling Holmes wants to share with as many Cummings School students as possible, regardless of their financial resources.

Of course, it’s not just the people who are bolstered by the experience. With its three partner sites, Holmes said the alumni association hopes to significantly improve animal, human, and environmental health over the long term, “regardless of whether students and alumni can commit to only a week or two of service.”

For example, on their trip to India, veterinary students Naimark and Pohly did blood tests on 338 dogs. The tests revealed that nearly all the dogs had been exposed to Ehrlichia, a tick-borne bacterium that, when untreated, leads to blood abnormalities, which lead to clotting disorders and also eye inflammation that can cause blindness. “There are so many blind dogs there!” said Holmes. “Alene and Alena’s project will have a direct impact on treatment of all future dogs at the sanctuary.”

Earlier in the year, veterinarian Stephen DeVincent, V95, sponsored and mentored two fourth-year veterinary students—Danielle Karcher, V19, and Jacqueline Webb, V19—on a trip to Kenya. Together, they assisted an effort designed to address the problem of too many roaming dogs in the fragile and critical natural ecosystem of the Maasai Mara National Reserve. The population of dogs is a mix of working (herding) dogs, pets, and strays. The stray dogs, which have been increasing in number, spread rabies, distemper, and parasites among—and sometimes even attack—wildlife and people living in this area of preserved savannah wilderness.

The Cummings School students worked with DeVincent and veterinarians, veterinary interns, and other veterinary students from Denmark and Kenya to convert a concrete building once used as a local bar into a bare-bones veterinary clinic for the Mara North Conservancy Dog Project. Then, with a physical clinic in place, the international team set about vaccinating 108 dogs over the rest of the week and castrating or spaying thirty-five dogs, sometimes by the light of a cellphone screen.

“Neither of the Tufts students had been to Africa, and one hadn’t been overseas at all, so I believe the experience absolutely offered a different perspective,” DeVincent said. “They were going from a full hospital setting in Grafton—a tertiary-care facility with intensive care—to literally creating and working in literally a makeshift clinic.

Their efforts were so well received by the local Maasai tribespeople that there are now more than sixty dogs on the waiting list for the next clinic in November, when DeVincent will sponsor and mentor fourth-year Cummings School students Adrian Dannis and Melissa Christopherson.

Cummings School students also have the opportunity to travel to Ecuador to volunteer at Amici Cannis, a nonprofit small-animal hospital providing low-cost sterilization and health-care services for owned and street dogs in Cotacachi and nearby communities.

Sara Forsythe, V19, traveled there with Holmes and Shari Morana, V93, in February. “I was the only student who ended up being able to go during that time,” said Forsythe, whose initial excitement at receiving the scholarship started to pale when she realized how out of her depth she felt. “I found out I would there for two weeks, while the alumni would be there for only one,” Forsythe said. “I don’t speak Spanish, so I had a lot of anxiety.”

However, putting that kind of nervousness to ease is what drew Morana, an experienced small-animal veterinarian and traveler, to volunteer. “I didn’t go on the trip to practice medicine or to do surgery,” Morana said. “I went there to mentor a student in a situation that’s outside their comfort zone. I think foreign travel relates well to being a veterinarian in that often things don’t go the way you expect—and you need to figure out a new plan.”

Forsythe rose to the occasion. Her first week in Ecuador, she focused on performing spay and neuter surgeries and seeing cases under the close supervision of Morana and Holmes. By the second week, she was comfortable operating independently alongside the hospital’s veterinary staff. She even went out to help round up street dogs for care and took a solo weekend hike to a waterfall.

“The whole trip was amazing—one of the coolest things I’ve ever done,” Forsythe said. “I hope to go back.”

Holmes hopes more alums can take part. “The only thing holding back more veterinary students from going on these international service trips is a shortage of veterinarians willing to travel as mentors.”

Are you a veterinarian interested in traveling to either India or Ecuador for one or two weeks as a student mentor? Can you make a tax-deductible contribution toward a $1,000 (Ecuador) or $1,500 (India) student travel scholarship? Are you willing to donate surgical and other clinical supplies to one of the three partner sites? If you are able to help, please email vetalumni@tufts.edu. You also can donate online at vet.tufts.edu/giving by choosing “Select an Area>Other” and typing in “International Alumni-Student Service Program.”