A Better Way to Screen Cats for Heart Disease 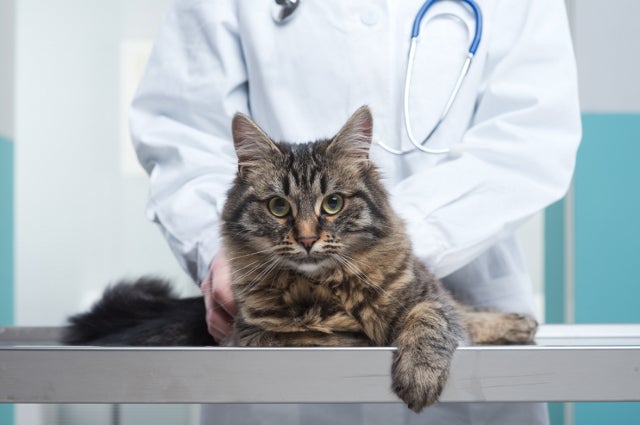 Cats are very good at hiding their health problems, a survival instinct from their wild ancestors, when showing weakness made them easier prey. One health problem they hide is heart disease, meaning it can progress to become life-threatening before it’s noticed.

About 10 to 15 percent of cats have some type of heart disease, according to John Rush, a veterinary cardiologist at Cummings School of Veterinary Medicine.

“Often, cats with heart disease show no signs that something is wrong with their heart, and thus the signs that they’re getting in trouble come on very, very suddenly,” Rush said. “They’re fine one moment, and they’re in a lot of pain or have marked difficulty breathing the next moment.”

Sometimes they have a heart murmur, and sometimes they don’t, said Elizabeth Rozanski, a critical care veterinarian at Foster Hospital for Small Animals at Cummings School. Some cats that have a murmur have no heart disease, and some cats with significant heart disease don’t have any abnormality to the heart.

To diagnose heart problems, veterinarians often refer cats to veterinary cardiologists, who use ultrasound to view and diagnose the heart. Sometimes, cats need to get a small amount of sedation, like valium, be able to hold still for an echocardiogram to diagnose heart disease, which is a low-risk—but not zero-risk—procedure. Plus, cardiac evaluations can be expensive—around $300-600.

While using ultrasound was once the domain of specialists, that’s not the case now. Ultrasound machines have gotten smaller and less expensive, making them increasingly more accessible to neighborhood veterinarians. More than three-quarters of veterinary practices in New England already have an ultrasound machine available, according to Rozanski.

The results, which were recently published in the Journal of Veterinary Internal Medicine, were quite positive.

The researchers jokingly dubbed the experiment a “cat cardiology roadshow,” because they drove around New England teaching veterinarians how to use an ultrasound machine to view the left atrium and left ventricle of cats’ hearts. Research colleagues from the University of Pennsylvania School of Veterinary Medicine traveled the Philadelphia area doing the same.

“When cats have heart disease, they often get hypertrophic cardiomyopathy—a problem with the heart muscle,” said Rozanski. “The first thing that happens is the left ventricle, which pumps blood to the body, gets thicker. Over time it doesn’t relax as well, so it can’t fill as effectively with blood, and the holding chamber (the left atrium) starts to get bigger. This happens over a long length of time.”

Rozanski and Rush taught the veterinarians to identify if either of the walls of the left ventricle were thicker than average and to identify if the left atrium was enlarged. Rush called the screening ultrasound a “two-minute echo”—short for echocardiogram—because the procedure takes just a few minutes and is gentle on the cat.

Veterinarians were not quite as successful identifying cats with mild heart disease, but those cats don’t necessarily need treatment, Rush said.

Rozanski said that the vets they trained indicated they would continue to screen cats for heart disease with ultrasound after the study finished. And Rush said he expects ultrasound technology will continue to get smaller and cheaper to encourage that goal.

“In my mind, the trajectory is that the cost of ultrasound machines and the miniaturization will continue to improve so that in five or ten years, many veterinarians might have an ultrasound that attaches to their phone or in their pocket,” Rush said.