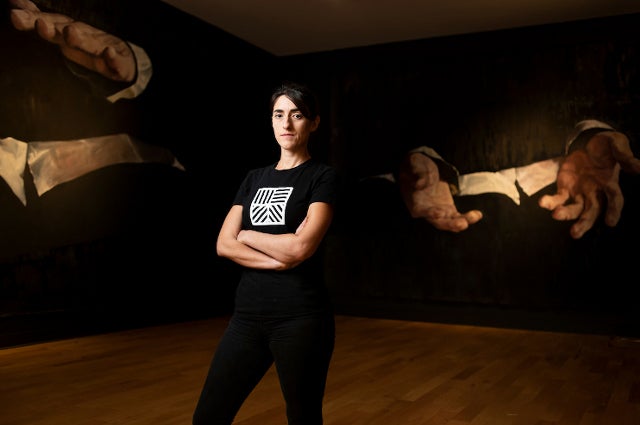 Daniela Rivera, SMFA06, is having quite a moment. She just opened a new installation at the Fitchburg Art Museum and mounted a dramatic exhibition in Buenos Aires. And on October 23, she’ll be featured at a reception by the deCordova Sculpture Park and Museum, where she’ll give the annual Rappaport Prize lecture.

The Rappaport Prize, which is marking its twentieth anniversary, is awarded each year to a contemporary artist with strong ties to New England. In 2019 it’s going to Rivera.

“It’s a $35,000 prize with no strings attached, except for a talk you give about your work,” she said. “It’s such an incredible push in terms of an art career.”

Born in Santiago, Chile, in 1973, Rivera grew up under the repressive dictatorship of Augusto Pinochet. She received her B.F.A. from Pontificia Universidad Católica de Chile, then moved to Boston in 2002, earned her M.F.A. at the School of the Museum of Fine Arts at Tufts University, and stayed in Massachusetts to build a career and a family.

Yet it seems that even now, her heart and mind are never far from Chile. Her projects, which are large-scale and immersive, reflect themes such as global migration, labor, and national identity.

The Andes Inverted, her 2017–2018 exhibition at the Museum of Fine Arts, Boston, focused on Chile’s Chuquicamata copper mine. Rivera tore down layers of gallery walls as a commentary on the environmentally and psychologically destructive effects of mining. She drew a copper point drawing on the previously tiled museum wall. Five oil and dust paintings were installed on large, flat wooden structures to look like mountains and command the gallery space.

Her new exhibit at the Fitchburg Art Museum, Labored Landscapes (where hand meets ground), which will run until January, consists of three dark, massive paintings of miners’ hands and several smaller photographs of hands with the miners’ stories etched onto them. The work grew out of her conversations with people who were relocated when the original site of Chuquicamata operations were found to be too polluted for human habitation. Rivera was deeply affected by the people’s struggle to put words to their experience.

“Three generations had grown up in this industrial site, and a town was created with more than 30,000 people,” she said. “There’s no possibility of going back to even see the place or recover some of the memories, it’s all in their heads. So in the conversations we started having, there was this impossibility of verbalizing the experience or what home meant. When you are outside of language, it becomes about body language.” 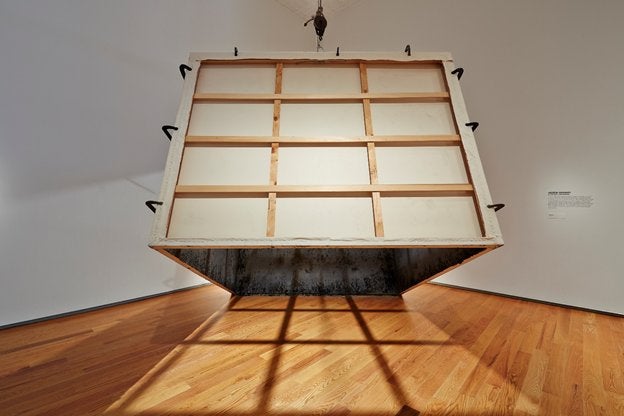 Daniela Rivera, “Tilted Heritage.” Ash on canvas, stretchers, C clamps, pulley system, and rope; 2015. Photo: Courtesy of Daniela Rivera
In Tilted Heritage, another project of Rivera’s on display at the Fitchburg Art Museum, ropes and pulleys lift an enormous box constructed of canvas, stretchers, and C clamps so that it balances on one edge, allowing viewers to walk underneath. When they do, they see that the canvas walls are coated with ash on the inside, “alluding to the trauma of a devastating fire in Valparaiso, Chile, in 2014, and the old infrastructure that exacerbated it,” according to the museum.

Rivera, an associate professor of art at Wellesley College, where she runs the studio art program, is currently collaborating with her students. “I love the students, I love the students,” she emphasized. “I have a public art piece in Dorchester right now for six weeks. It’s a sound piece that involves both the Dorchester and the Wellesley College communities,” she said. “Students are working together gathering stories from the neighborhood.”

The project is called Sobremesa, which is a Spanish word for the tradition of relaxing after a big meal and sharing stories or chit-chat. 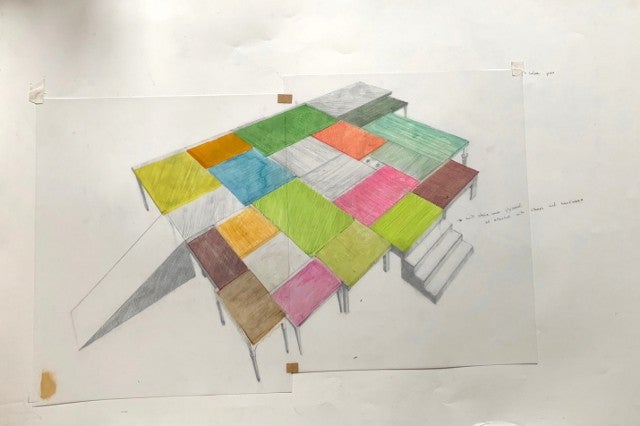 Daniela Rivera, “Sobremesa (KaraokePolitics)” preparatory drawing # 3. Watercolor, gouache, and pencil on paper, 2019. Photo: Courtesy of Daniela Rivera
“During sobremesa, plates and leftovers as well as conversations and memories begin to literally and figuratively accumulate on top (sobre) of the dinner table (mesa),” Rivera wrote on her blog. The outdoor stage on which community members participating in Sobremesa will voice their diverse perspectives is itself an installation. It features twenty dining room tables that have been altered so that they all connect, creating a single platform. The tops of the tables have been stained in different colors so that they look like different territories on a large map.

“Honestly, being an artist is super expensive. To carry out the projects I did in the last year, I had to hire people, and I don’t have money to hire people,” she said. “The money is going to fill a lot of gaps and keep the studio practice going. But it also provides some breathing space to think about future projects that are bigger than me.”

Daniela Rivera’s work will be included in the SMFA Art Sale, coming up November 21-24.