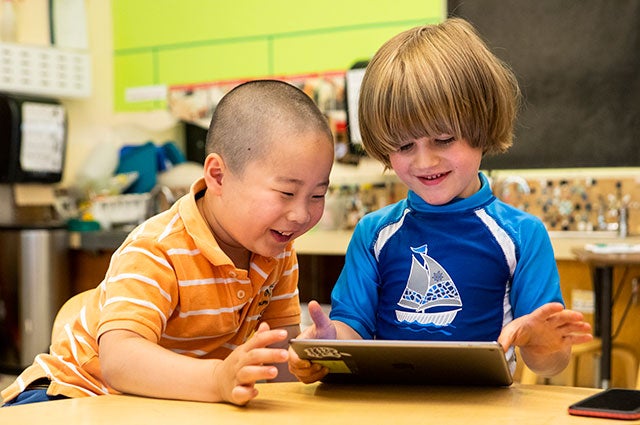 The U.S. Department of Education recently awarded a four-year, $4 million grant to Marina Umaschi Bers, professor and chair at the Eliot-Pearson Department of Child Study and Human Development, adjunct professor in the Computer Science Department, and head of the Developmental Technologies (DevTech) research group at Tufts.

The funding is for a project that will build on the research and two widely used coding technologies developed by DevTech: KIBO Robot and ScratchJr. Bers and her team will collaborate with the Norfolk Public Schools in Virginia—the first state to mandate computer science education starting in kindergarten—to bring the free ScratchJr app to over 7,500 children in the district and train over 450 early childhood teachers.

“My DevTech research group is interdisciplinary and we not only design new technologies to bring coding, computational thinking and robotics into early childhood, but we also focus on developing curriculum and professional development strategies that are age-appropriate and playful,” said Bers, who has been at Tufts since 2001.

Researchers hope to learn the best ways to teach computer science and coding as another language, while reinforcing traditional literacy. “At this young age, children learn how to read and write,” Bers said. “And the idea is at the same time, they can learn programming languages, and can use them to express themselves.”

Norfolk, Virginia, is one of the poorest school districts in the US and one of the lowest-performing districts in the state. They have a socioeconomically and racially diverse population with a graduation rate under 80%. Those challenges are precisely what make Norfolk an ideal partner for this study. “This project follows the Tufts idea that you don't just do research in the ivory tower, you work with the community,” Bers said.

Watch a video about Tufts-led efforts to teach coding to young children and their teachers. Video: Steffan Hacker

The goals of the project are to develop a free, publicly available K-2 computer science curriculum that will be implemented in 32 Norfolk schools; measure learning outcomes by both students and teachers; and then train teachers to carry on with the work after the grant ends to assure scalability and sustainability (part of the grant is earmarked for scholarships to Norfolk’s teachers to enroll in DevTech’s early childhood technology certificate).

“This award exemplifies the best of Tufts and our Eliot-Pearson department, as it integrates research and practice, it has a high impact for a population in need and involves interdisciplinarity,” said Bers.