In a World in Disarray, the Role of the U.S. Is Uncertain

Richard Haass, president of the Council on Foreign Relations, tells a Tufts audience that what happens in the world fundamentally affects life in the United States 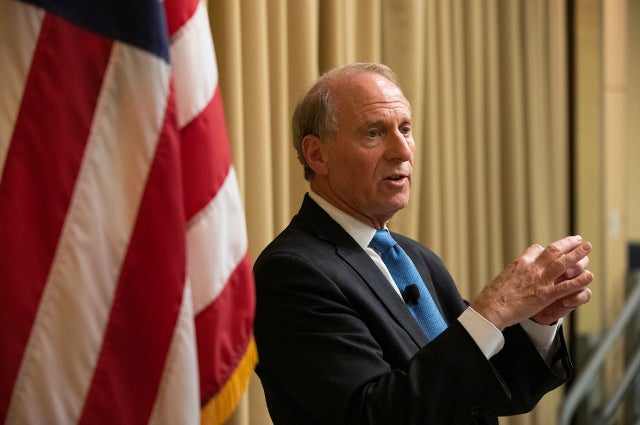 This particular moment in world politics stands out as a pivotal moment in history, said Richard Haass in his Dr. Maurice S. Segal Lecture at The Fletcher School at Tufts. Haass has spent his career working for U.S. presidential administrations and at the Pentagon, the State Department, and the Council on Foreign Relations, which he has led since 2003.

“I’ve been in this business now for better than four decades, and it’s one of the few times in my life I have this sense that we are living in history,” he said. “History used to be something that I studied, and now I feel we’re living it.”

Titling his October 17 lecture at Tufts “A World in Disarray,” Haass addressed issues ranging from Syria and Brexit to the Trump administration, while highlighting geopolitical trends. He painted a picture of a world facing change and uncertainty on a level unseen for generations. Haass anchored the evening with four core themes.

The end of the Cold War triggered geopolitical changes that remain in play. From the end of World War II until the late 1980s, the Cold War framed foreign relations in a U.S.-Soviet duopoly, Haass said. “You had the structure and the discipline that was encouraged by nuclear weapons, which meant that [the U.S. and the Soviet Union] had to be extraordinarily careful in how they went about competing with one another,” he said. “It was truly a bounded competition.” Following the Cold War, anarchy has spread and aging institutions have faltered. “And what we’ve seen . . . is that the willingness and ability of the world to keep pace with the challenges has fallen short,” he said.

The emerging balance of power is unique, with an unclear, uncertain future. “One of the real quirks of this era is that we have the rise of medium and global great powers—[and] at the same time, we have the emergence of so many weak states,” he explained. This varied field has proven fertile ground for the resurgence of major power rivalries, such as the U.S. and Russia and the U.S. and China. A major challenge, then, is figuring out how to manage power rivalries “in a way that doesn’t preclude major power cooperation to deal with regional and global challenges,” he said.

The U.S. has abdicated its role in international relations, and there are consequences. After sixty-five or seventy years as “principal architect and general contractor of world order,” Haass said, the United States has fairly recently distanced itself from that role. It’s “what really makes this period unique, more than anything else,” he said, noting that it’s a twist that he hadn’t expected. “All sorts of things flow from this, and I have more questions than answers,” he said. Nonetheless, “if the United States is once again inclined to play the sort of role it historically played, it will be more difficult than it was,” he said. “But if we don’t do it, I think it’s far more certain that things will decay.”

Haass wonders if the current unpredictability in the United States and the world is temporary, a situation that will correct itself with a new presidential administration in the U.S., or if we’re witnessing a return to a more normal state of play, with democracy withering in places and authoritarianism on the rise. “What’s the exception, what’s the norm? And I think the answer to that question . . . will tell us a lot about the future,” he said.

Ultimately, Haass noted that the Trump administration, Brexit, and events in the Middle East aren’t unique, disparate topics. “We’re actually at a critical point in not just the history of this country, but the history of the world; the two are so intertwined,” he said. “My favorite line is that the world is not Las Vegas: What happens there doesn’t stay there. What happens in the world will fundamentally affect the quality of life in the United States.”

Heather Beasley Doyle is a freelance writer based in Arlington, Massachusetts.