An FBI Secret That Everyone Should Learn 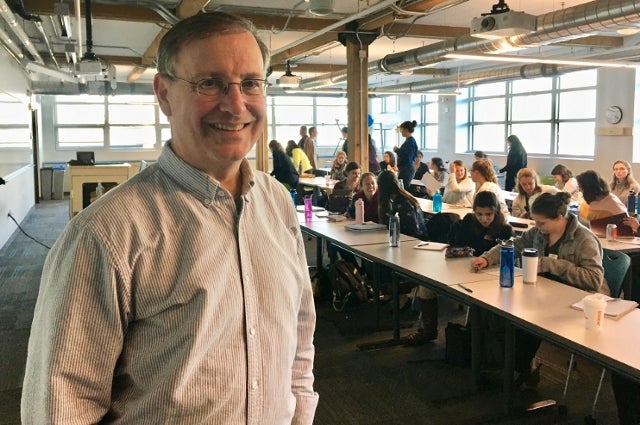 Presidents George W. Bush and Barack Obama have a lot in common, according to a man who worked for both of them. Chuck Rosenberg, A82, who served as a Justice Department official in their administrations, said that one of their most noticeable shared traits was their ability to listen.

Rosenberg will never forget the time he rode in a limousine with President Obama, who gave him his attention the entire trip. “He didn’t feel the need to talk to fill the time,” Rosenberg said. “He felt the need to listen.”

Rosenberg recently visited Tufts to share his experiences with Tufts students. But his audience was not made up of political science majors or future lawyers. It was a room full of aspiring occupational therapists.

You read that right. The former chief of staff to FBI director James Comey and head of the Drug Enforcement Administration from 2015 to 2017 made a special trip to Medford to be a guest speaker in the seminar Interactive Reasoning in the Practice of Occupational Therapy.

The course teaches students how to talk with their clients—who may face challenges due to age, injury, or disability—to find the best ways to help them function in their daily lives. Occupational therapists need to uncover not only what their clients need, but what their goals are.

Who saw a connection between federal prosecution and OT? That would be the course instructor, senior lecturer Janet Brooks, A82, who has been friends with Rosenberg since they met in their first-year English class at Tufts.

Brooks thought Rosenberg, who is now the host of a wildly popular MSNBC interview podcast The Oath, could teach her students a thing or two about interview skills. Even though all his guests are former top-level government officials—the likes of Comey, Sally Yates, and James Baker—the way you talk to someone remains primarily the same, Rosenberg said.

It starts with listening. “Really listening is incredibly hard to do,” he told the students. That’s because it takes humility. “The other person may know something you do not know, and you have to admit it. And that’s easy in a classroom setting. It’s really hard in real life.”

He said former FBI director Robert Mueller, who hired him as counselor in 2002, is both unbelievably humble and extremely confident. He is also the hardest-working person Rosenberg has ever known. “I would walk barefoot on broken glass for that man,” he said, adding, “working for him felt that way.”

Rosenberg said he hadn’t yet learned  how to pay attention to others when he was a young prosecutor. A judge once told him in court that he had not listened to his own witness’s answer on the stand. Since then, he has slowly tried to improve his emotional intelligence.

Part of that was learning to talk to everyone with civility and equality, whether it was a colleague or a criminal. He would ask the prosecutors who worked for him to do so as well.

“The ability to sit down with a bank robber or a federal judge and treat them exactly the same, that’s how people succeed in my line of work,” he said. “Their main job is to get information from other people . . . which, by the way, is not all that different from your job. When you think about it, you probably have more in common with an FBI special agent than you ever imagined.”

That approach will serve occupational therapists—and anyone, really—in the current political climate, where they might have to work with people who hold views opposite to their own. You and your client may never connect on gun laws or immigration, he said, but if you look hard enough, “maybe there is some common ground.”