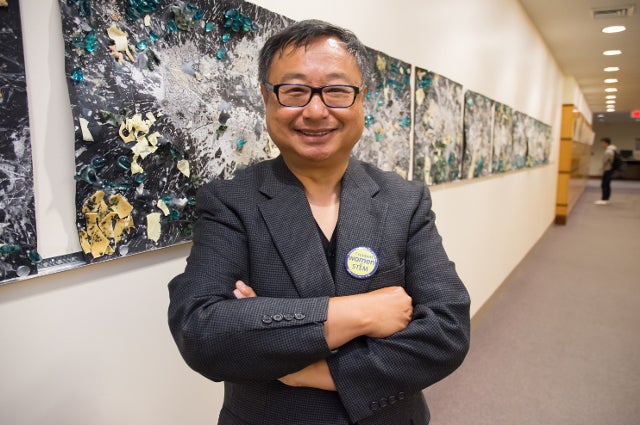 The periodic table is a tidy chart of chemical elements. A new exhibit at Tisch Library whips those elements into artistic chaos.

Artist-scientist Dan Jay, dean of the Tufts Graduate School of Biomedical Sciences and adjunct professor at the School of the Museum of Fine Arts at Tufts, has been a fan of the tabular display since he was a little boy.

“The periodic table was a statement that we could understand nature for the first time. That was a very critical thing in my mind,” Jay said. “This is not a casual interaction; this is a deep passion for the periodic table, chemistry in general, and the ability to understand knowledge and organize.”

This passion comes through in his latest exhibit, Archemy: The Periodic Table at 150, which explores the intersection of science and art. It is on display at Tisch Library until December 31.

“Each of the elements of the periodic table has an atomic symbol of letters. Calcium is Ca, gold is Au, etc. The idea was to organize the work around elements that all started with the same letter for their atomic symbol,” he said. “It’s kind of an artificial rubric, but it meant I could have some kind of focus and define works around that.” 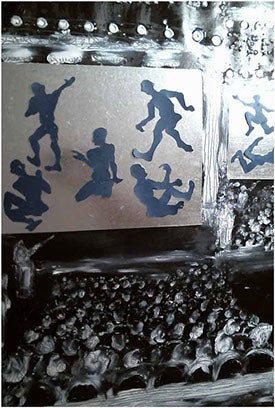 Dan Jay, “Zn-Zr”—made of zinc and zirconium. Photo: Courtesy of Dan Jay
For example, Jay mixed zinc (Zn) and zirconium (Zr) for Zn-Zr, a piece that depicts a silhouetted audience watching a screen. The audience is drawn with diaper ointment that contains zinc oxide. The dancing figures on the screen are cutouts from zirconium sandpaper in the style of Henri Matisse, while the flashing marquee lights are cubit zircons.

Another piece titled Mn-Mg-Mo 2014 is a testament to the importance of chemistry know-how in Jay’s work. The elements manganese (Mn), magnesium (Mg), and molybdenum (Mo) are explosive if blended in a so-called thermite reaction, but can be stable when combined with the right timing.

“With my chemistry background, I have the knowledge to do this safely,” he said. In other words, don’t try this at home.

All the pieces in the exhibit are quite textural. Liquid Nitrogen and Salt 2014, for one, looks like craters on the moon. But not all the work relies on the freezing ability of liquid nitrogen. Some of the pieces play with the dynamism of magnets and magnetic fields instead.

Jay said everyone sees different things in his art, but many of the works that use magnets have a medieval feel, especially when he incorporates materials such as steel wool, rust, and steel shavings.

“We are honored to be able to host Dan’s art in Tisch Library,” said Dorothy Meaney, director of Tisch Library. “The murals and framed pieces bring an engaging energy to a visible and busy space here, and I see many students drawn in by the unusual combination of materials, and the playful composition that marks his work. Archemy showcases Dan’s interdisciplinary expertise and imagination.”

One of the highlights of the exhibit is a large mural that Jay made with students at the Boston Arts Academy, a public high school for the visual and performing arts.

“Chemistry may not be a favorite subject there, but they have wonderful chemistry teachers,” Jay said. “I met with them and said, ‘Let’s try to get the students thinking that chemistry is cool.’”

He gave a talk on the periodic table and why iron is magnetic, followed by a hands-on community art project that would demonstrate the concepts in the lecture. The result resembles something like a Rorschach test.

“We all made art together with a giant mural collage using a twenty-five-foot piece of chromatography paper. The students placed a variety of bar magnets under the surface and sprinkled on iron filings, which would capture the magnetic field lines,” said Jay.

To imbue the exhibit with community spirit and add color, Jay gathered rust from his surroundings—including an underpass along the Orange Line and a men’s bathroom at Fenway Park—and incorporated it into his artwork.

“We think of rust as trash, but if you look at these things closely, there’s a beautiful patina or etching that goes on just from nature,” he said.

Another must-see is a mural that Jay created with visitors to the Peabody Essex Museum in Salem showcasing elements that start with S. Peabody Essex began in 1799 as a maritime museum, so the piece captures themes related to the sea.

Like the collaboration with the Boston Arts Academy, this was the result of an active demonstration held during a week of activities planned during school vacation last February. But since the children involved were younger, Jay did more of the heavy lifting.

He covered ten large sheets of black printing paper with a mix of sand, salt, sodium borate, and glue and water with liquid nitrogen. The rapid freezing and explosive thawing across the paper created a “very dynamic surface.” Visitors pasted on blue glass beads made of silicon dioxide and large crystals of orange salt. They cut shapes made from plastic-like sheets of yellow sulfur or green-hued copper sulfate embedded in acrylic.

Jay didn’t provide any artistic instruction, and he didn’t edit anything afterward. The result is a mural that elicits a feeling of being under the sea.

“For me, the greatest satisfaction comes when there is a small child whose eyes are glued to this, and you’ve sparked an interest, and you never know where that will lead,” Jay said. “Maybe it leads to the next great scientist or the next great artist.”

Archemy: The Periodic Table at 150 is on display at Tisch Library through December 31.

Tufts University removed the Sackler name from all programs and facilities as of Dec. 5, 2019, given the connection between the opioid crisis and the Sackler family and their company, Purdue Pharma. This article was updated on Feb. 6, 2020, to reflect the school's new name, Tufts Graduate School of Biomedical Sciences.

A Photographer Conveys the “Emotional Experience of Being There”