Testing a New Therapy for Horses Struggling to Breathe 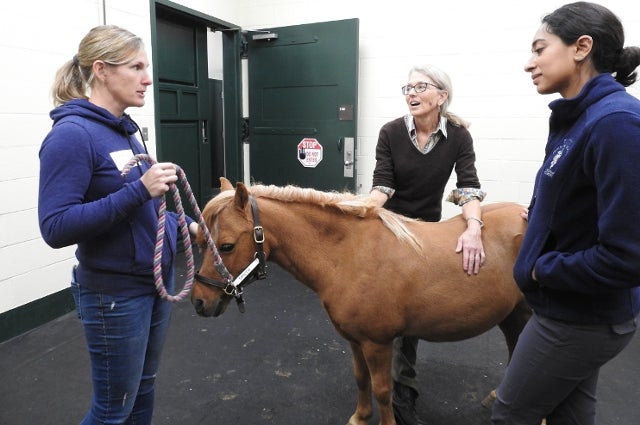 Pixie, a thirteen-year-old Shetland pony, is only about one-fifth the size of most horses seen for asthma at Tufts Equine Center. That doesn’t make his breathing problems any less significant, though.

In the year and a half since Pixie was adopted, his asthma attacks—in which his sides heave from desperately trying to draw each breath—have become more common and severe. “It’s awful,” said owner Sara Smith, whose three-year-old daughter loves being led around on the gentle gelding’s back. “Once the heaves start, it’s just so uncontrollable.”

Cummings School veterinarian Melissa Mazan, V93—who is caring for Pixie as part of a clinical trial evaluating a possible new treatment for equine asthma—stroked the sorrel pony’s nose and nodded sympathetically. She has been working on the challenging condition of equine asthma for her entire professional career, and knows how hard it hits the horses and their owners.

“We have learned a lot about how to diagnose equine asthma and its molecular mechanisms, but we treat this condition almost exactly like we did when I started out more than twenty years ago,” Mazan said. “And anyone trying to treat an asthmatic horse often ends up stuck between a rock and a hard place.”

Bronchodilators—the medications delivered by rescue inhalers to treat asthma attacks in humans—relax the airway, making it easier for asthmatics to breathe. But humans—and horses—can quickly develop a tolerance to these drugs, so these treatments must be used sparingly to preserve their ability to work for the most acute asthma attacks.

For this reason, corticosteroids, which reduce the inflammation that fuels asthma, do most of the heavy lifting when it comes to treating affected humans and horses. “Inhaled steroids—you know, the puffers—have been a game-changer in human asthma,” said Mazan. “They have been in equine asthma as well, but they are sickeningly expensive.”

Inhaled steroids can cost as much as $300 a week for horses. “You’ve got to have pretty deep pockets to afford that,” Mazan said. Many horse owners must choose a less-expensive option: oral or injectable steroids. These get absorbed into the bloodstream, though, and can cause serious side effects throughout the body. That’s particularly true in aging horses with coexisting metabolic disease, such as poor wound healing and liver dysfunction.

Mazan routinely reviews scientific publications on human asthma, searching for new equine treatment ideas. One day, she found a study looking at whether a local anesthetic called lidocaine could treat people with intractable cough—coughing so bad that it can break a rib or collapse a lung.

Researchers “took regular lidocaine, put it in a nebulizer, and had the affected people inhale it,” said Mazan, “and the patients had a very good response.” A small number of follow-up studies in laboratory animals also had encouraging results.

Mazan thought the treatment looked promising for horses because lidocaine is cheap and widely available. The drug also has a good safety profile. It’s already used intravenously at Tufts Equine Center to treat gastrointestinal pain after colic surgery and foot pain from laminitis.

There was no shortage of horses to enroll. “A lot of horses, especially in New England, are affected by asthma,” said Ananya Mahalingam-Dhingra, a second-year veterinary student at Cummings School who served as Mazan’s co-investigator for the study through the Summer Research Training Program.

“I understand the owners’ desire to find something to help them,” added Mahalingam-Dhingra. “They’re typically older horses kept for companionship, and their people care a lot about their quality of life. These animals often can’t tolerate exercise to the point where they’re respiratory cripples. Breathing can be so difficult for them that it’s tough to watch.”

Funded by an Advancement in Equine Research award from Boehringer Ingelheim, the first phase of the study enrolled seven client-owned horses with asthma. Each horse was randomly assigned either lidocaine or a placebo (saline) via a nebulizing mask twice a day for two weeks. At both the outset and end of the trial, Mazan, Bedenice, and Mahalingam-Dhingra ran a battery of tests looking at exercise tolerance, lung function, and inflammatory cells to see if there was any improvement.

The trial was “blinded,” meaning that Mazan and the horse owners did not know which animals were receiving lidocaine. “We had two horses that were not doing well,” Mazan said. “And the way we conduct clinical trials is that it’s never OK for a horse to do worse. We tell clients if that happens to call us right away so we can stop the trial, ‘un-blind,’ and figure out a better plan for their horse.”

The researchers stopped the trial and learned that the five horses that did well on the study all had received lidocaine—including Roy, a fourteen-year-old spotted saddlehorse.

When Roy was first evaluated by Cummings School researchers, he could not complete the exercise test. “He had to keep stopping, and Dr. Mazan said his asthma was pretty bad,” recalled his owner, Lisa Grigaitis. “I work in ten-hour shifts, so it was tough having to be up at 4 a.m. to be sure he received the nebulized treatment twice a day,” she said. “But it really paid off. It was unbelievable how much he improved.” (Roy has remained largely symptom-free since finishing the trial in July.)

The two struggling horses had received the placebo. “Given those results, we didn’t feel comfortable keeping asthmatic horses off any treatment,” Mazan said. So the researchers changed the trial.

In the current study, which Pixie the pony participated in, horses are randomly assigned to be given either lidocaine or a corticosteroid considered the current gold standard of care. (Editor’s note: That clinical trial has since ended. However, in March 2020, Mazan, Bedenice, and their fellow researchers won a two-year grant from the Grayson-Jockey Club Research Foundation to further study the efficacy of nebulized lidocaine in treating equine asthma. Another clinical trial at Tufts Equine Center is expected to begin enrolling horses with asthma later this year.)

Diane Auger said she enrolled Dayton—an Icelandic horse beloved by children in the Friends For Tomorrow therapeutic horseback riding program—in the initial phase of the study because he had not done well on systemic steroids. She said she was thrilled to see Dayton’s condition turn around after receiving the nebulized lidocaine.

But Auger is even happier that she may have helped advance veterinary medicine for all asthmatic horses. “My dad was a doctor, so I know you don’t get anywhere in medicine unless sometimes you try new approaches,” she said. “I have asthma myself, so knowing I could aid in finding something new to help just feels huge.”

In addition to possibly advancing a new treatment for suffering horses, the equine asthma research helps fulfill Cummings School’s core mission: the development and education of a new generation of clinician-scientists.

For the asthma study, veterinary student Ananya Mahalingam-Dhingra ran appointments alongside the doctors and served as the clients’ primary contact during their horses’ entire time in the study. She saw about two horses a week over the summer. Each appointment entailed nearly a full day of exam and laboratory preparation, medical workups, and data recordkeeping.

“I not only gained a lot of hands-on clinical skills in working with horses, but also learned a lot by example on how to communicate effectively with clients,” Mahalingam-Dhingra said. “Dr. Mazan is an incredible doctor, and knows how to speak with clients in a way they'll respond to. Every person is different. Some people came to the trial really emotional. Others worked in the medical field and wanted to know exactly what we were doing, and why, every step of the way.”

Mazan reciprocated the positive feelings. “It has been really a joy for me to see Ananya develop not just her research and diagnostic skills, but also how she’s really honed those ‘soft skills’ in carrying out the clinical trial,” Mazan said. “These horses are our patients, and patients come with owners who care a lot—and need to have a team who they trust to communicate with.”

Mahalingam-Dhingra’s research was supported by the school’s Summer Research Training Program, which is partially funded by the National Institutes of Health and the U.S. Department of Agriculture. Celebrating its thirtieth year in 2019, the program helps teach future veterinarians how to contribute to a new body of knowledge through clinical, bench, and field research projects on the Grafton campus and around the globe.

“Clinical research is one of the best ways to train our students, because they see that they can be ‘real veterinarians’ while they are creating real knowledge,” Mazan said.

Mahalingam-Dhingra said that revelation has literally changed the course of her career.  “Before working with Dr. Mazan on this study, I planned to go into private practice and maybe ambulatory medicine. After this experience, I've fallen in love with academia and doing research. I'm looking to do a residency now.” —GR