Breaking the Cycle of Poverty for Ugandan Women 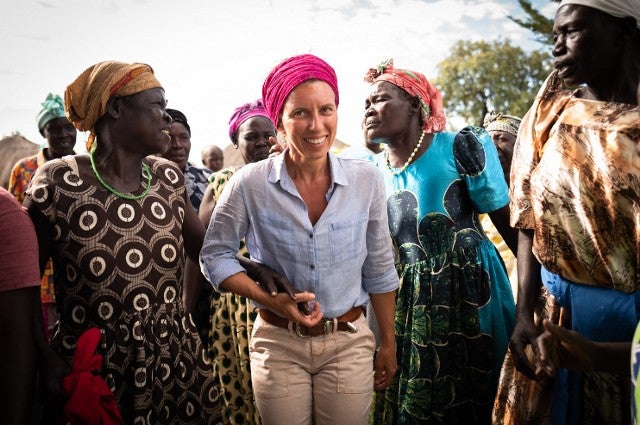 While doing humanitarian work in Mozambique after the civil war in the early 1990s, Linda Eckerbom Cole, F06, N06, noticed something missing.

“I felt a lot of development and humanitarian work was very much short term, and I was seeing that a lot of women and girls were not part of the reintegration process,” she said.

Her search for the root of the problem took her to The Fletcher School and the Friedman School’s joint Master’s in Humanitarian Assistance program, where she wrote her thesis on the topic before returning to humanitarian work in northern Uganda.

“I went around and talked with the women living in the camps to get an idea of what they needed to move forward after the war,” she said. “People didn’t have soap or basic necessities. They were reliant on welfare programs for food. The biggest problems were access to capital and lack of education.”

The result was African Women Rising, a nonprofit Linda founded with her fellow Mozambique worker, Tufts alum, and husband, Thomas Cole, F06, N06. After listening to women’s stories Linda established African Women Rising’s first component: a microfinancing program based on village savings and loan associations, tailored to the local context. Before long, women were receiving adult literacy and financial training, building their savings together, and taking loans out of those joint savings to grow their own crops. 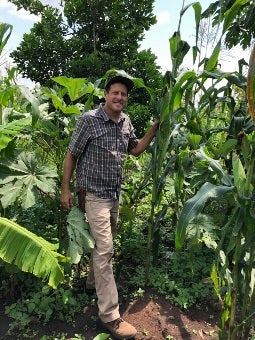 “It’s about empowering people to see what they have and utilize those local resources around them,” said Tom Cole, here in Palabek, in northern Uganda. Photo: Brian Hodges
But the growing process had its own problems. Although the women were receiving seeds through humanitarian aid programs, they were mostly annual crops such as carrots and cabbage, which stopped growing in the dry season because they weren’t well suited to local conditions.

“We found that even as women were saving more money and growing more food, there was still what’s called a lean or hunger season during that period of the year when food stocks run out and before the next crop is ready to be harvested,” Tom said. “And when the funding ended at the end of the war, the aid disappeared.”

Tom turned to permagardening, an agroecological farming system he developed in sub-Saharan African communities, which the USAID later adopted as an official methodology. Rather than planting big fields of imported seeds, this approach relies on cultivating native, nutrient-dense crops throughout the year—such as northern Uganda’s pigeon peas, cassava root, amaranth, okra and local spinach varieties—right around the home.

“It’s about empowering people to see what they have and utilize those local resources around them,” Tom said. Farmers learn to manage natural resources through the intentional design of their compound, harvesting water and capturing waste streams to enhance soil fertility and boost food production.

Permagardening also involves showing people how to plant trees so the shade helps their crops grow, place their animals so that nutrients from their manure flow into the garden during the rains, and use available resources such as charcoal dust, wood ash, and tree leaves to nourish their soil.

“You’re creating a self-regenerating, sustainable, long-term system, as opposed to plopping vegetables in the ground,” Tom said. “Once you do that, the system begins to work for itself.”

The African Women Rising team is already proving the success of the permagarden approach with thousands of South Sudanese refugees in Palabek refugee settlement in Northern Uganda, Tom said, but his dreams don’t end there.

“I get really excited about seeing these regenerative approaches replicated and scaled out to more communities and agencies to create more resilient homesteads and landscapes, especially with climate change and shifting weather patterns severely impacting people,” he said.

The third and most recently established component of AWR takes a long view, too. “Talking to the women, we realized that a bigger problem is that most girls drop out of school in fourth and fifth grade, and the whole cycle of poverty continues,” Linda said. The solution: support and mentor young girls so that they finish primary school and continue to secondary education. “So at some point there will not be a need for us in these communities,” Linda said.

Although Linda continues to travel to northern Ugandan communities several times a year to check in on AWR’s programs, they are now run largely by the women themselves, she said. Besides their healthier looks, more abundant animals, metal roofs, and styled hair—a sure sign of more stable finances—some have even sent their children to college and successfully run for local office.

“What I want is for this organization to become bigger than me, and to eventually work myself out of it,” Linda said. “The change we are seeing is profound—and to see women building on these opportunities, influencing their communities and taking charge of their lives is really rewarding.”