The Doctor Who Propelled Tufts to the Top in Nutrition

People all over the world are healthier and better nourished, thanks to Irwin Rosenberg 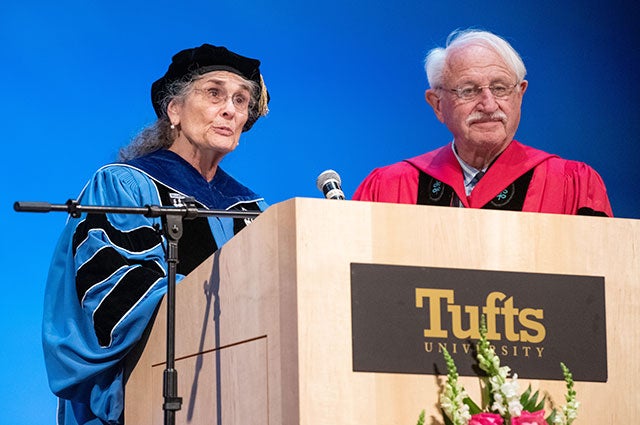 For thirty-three years, Irwin Rosenberg has been synonymous with nutrition at Tufts, leading both the Jean Mayer USDA Human Nutrition Research Center on Aging (HNRCA) and the Friedman School of Nutrition Science and Policy, conducting pioneering research, and teaching students across the health sciences. Through it all, he has helped steer the conversation about nutrition, both in the US and around the world.

While in medical school at Harvard he studied with Mayer, the innovative scientist who became Tufts’ transformative president in the 1970s and has continued Mayer’s legacy of integrating nutrition and medicine. In fact, that first encounter with Mayer led, circuitously, to Rosenberg’s eventual recruitment to Tufts from the University of Chicago, and later contributed to his appointment as Jean Mayer Professor.

This September, the Friedman School and HNRCA celebrated Rosenberg’s career at a retirement party; although he remains a constant presence in the Jaharis building, the Friedman home that was constructed during his tenure as dean. “I feel very privileged to have had a career at places like Tufts that were willing to put nutrition as a high priority among their institutional goals,” Rosenberg said. “That’s been very satisfying.”

Tufts Now sat down with Rosenberg, now the University Professor of Nutrition and Medicine, to look back on his prolific career.

Tufts Now: How did you get interested in nutrition?

Irwin Rosenberg: My first experience with it was as an undergraduate at the University of Wisconsin. I did some research on metabolism, and nutrition is certainly a form of applied metabolism. At medical school, I took a course Jean Mayer taught. That connection led to Mayer recruiting me to be part of a research project. I ended up in Bangladesh, which at the time was East Pakistan. It was a nutritional survey, and I also worked with a National Institutes of Health (NIH) team on cholera there, which got me interested in both nutrition and the gastrointestinal tract.

I later became chief of the gastroenterology unit at the University of Chicago, where I continued to have an interest not only in nutrition research and science, but also policy. I was president of the American Society for Clinical Nutrition, chair of the Food and Nutrition Board for the National Academy of Sciences, and from that I was recruited to become director of the HNRCA in 1986.

You coined the term “sarcopenia” for the loss of muscle mass and launched its study as a condition associated with aging. How did that happen? 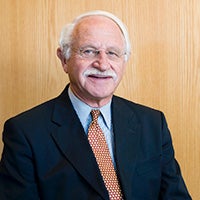 “There is a lot of interest in how to care for older people, but we’re still playing catch-up in our understanding of the phenomena of aging,” said Irwin Rosenberg. Photo: Melody Ko
As the director of a USDA-supported center on aging, I was very interested in the nexus of nutritional biology and aging biology. One of the things that came up was the possibility that there may be nutritional approaches to preventing the functional declines associated with aging. At a meeting in 1988 or so, we were talking with a heavy emphasis on osteoporosis [loss of bone mass], which was sort of the key focus for aging at that point.

I made the observation that decline in bone health and bone density, known as osteopenia, was important, but probably no more important than loss of muscle strength and mass, which would have perhaps an even more profound effect on mobility, independence, and more. I said maybe it needs to have a name—probably a Greek name to be taken seriously, which I said tongue-in-cheek—and I suggested sarcopenia, or “loss of flesh.”

Later, after the publication of the proceedings, the NIH made a call for research about sarcopenia. Now, sarcopenia has three international meetings, a World Health Organization definition, and an exponential increase in interest.

Has the scientific interest in aging kept pace with the demographic reality of ten thousand Baby Boomers turning sixty-five every day?

The uptake in interest in scientific issues related to aging was slow up until the ‘80s, and certainly the interest in what nutrition might offer in way of prevention, was slow to accumulate. The discussion of cognitive decline and nutrition took a long time. That concern has gotten a lot stronger in the last decade and half, but it has really not kept up with the tsunami of the number of elderly, not just in this country, but throughout the world.

There is a lot of interest in how to care for older people, but we’re still playing catch-up in our understanding of the phenomena of aging. The rise in just one area, the loss of function due to cognitive decline and dementia, and its cost, makes understanding it better an international imperative.

What are the points of pride from your tenure as dean of the Friedman School from 1993 to 2004?

During my deanship, the student body increased about fivefold, and the budget more than fivefold. Many programs that were developed in the early days of the school became codified as part of the structure. With then-Academic Dean Beatrice Rogers, we made international nutrition one of the pillars of the school. The Food and Nutrition Policy (FPAN) program, which has both national and international components, offered our students a chance to be trained experientially in the field.

We were one of the first to have an agriculturally and environmentally oriented nutritional program, the Agriculture, Food, and Environment Program; it’s now one of our most prominent programs. The program in Nutrition Communication, developed with Professor Emerita Jeanne Goldberg, is another of our most popular programs, and that has morphed into not just a curriculum on communication, but on understanding how to influence nutritional behavior.

The famine center, now the Feinstein International Center, is now one of the more important programs. It’s not just about famine, but complex emergencies, especially within conflicts, of which there are way too many in the world. By opening those programs, we opened the school to a broader research orientation and a broader number of students.

In the communications program, we developed the Nutrition Navigator website, which allowed people to get to good, reliable information early on in the grow of the web. We also had the Nutrition Commentator, to help journalists understand what was going on with emerging science. We started a journal, Nutrition and Clinical Care, for physicians. We expanded the activities of the Tufts Health and Nutrition Newsletter and we made a strong relationship with the International Nutrition Foundation and its journal, the Food and Nutrition Bulletin, of which I became the editor. I was also the editor of Nutrition Reviews.

What’s next for you?

For the last five or six years, I have been engaged in a major Tufts nutrition project under contract from the U.S. Agency for International Development (USAID), the Food Aid Quality Review. We’re involved in food-assistance programs all over the world, and also have major research projects, especially in Africa. One of the things we’re looking at is the nexus of nutrition and infection, which I’ve been interested in going all the way back to the ‘60s and ‘70s, when I was working on nutrition and cholera.

Back then we reported on a phenomenon called environmental enteropathy, an inflammatory infection of the intestine that prevented normal absorption, and asked, how important was that in malnutrition? It turns out, that topic has come roaring back, with the new interest in the microbiome, and one of the studies we’re working on in Africa concerns the huge global problem of stunting of children. I’m winding down my lab activities on aging, nutrition, and cognitive function, and I have interest in a startup company that’s looking at other ways of understanding Alzheimer’s, Parkinson’s, and other age-related conditions.

I want to spend more time studying other things, like music. I’ll be taking some courses at Tufts and Harvard. I don’t think I’m going to have trouble filling my time.