At an estimated $2.84 per day, the cost of diet for human and environmental health exceeds daily per capita income in many low-income countries 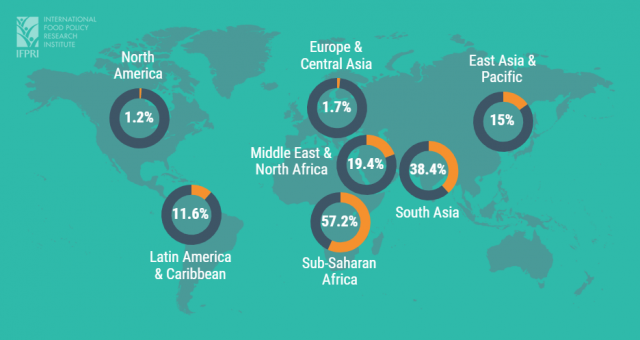 BOSTON and WASHINGTON, D.C. (Nov. 7, 2019, 6:30 p.m. EST)—A diet meant to improve both human and planetary health would be unaffordable for at least 1.58 billion people, mostly in sub-Saharan Africa and South Asia, a new study estimates.

Earlier this year, the EAT-Lancet Commission on Food, Planet, Health published recommendations for a universal diet that addresses both human and planetary health. The Commission suggested that adherence to this diet could ensure that our future food systems can sustainably and nutritiously feed the estimated population of 10 billion people in 2050.

The study published today in The Lancet Global Health – from researchers at the Friedman School of Nutrition Science and Policy at Tufts and the International Food Policy Research Institute (IFPRI) – sought to address what many felt was one of the main components lacking in the creation of the recommended diet, namely affordability.

“When formulating this pioneering benchmark diet – addressing individual health outcomes as well as the health of the planet – the Commission deliberately did not take its cost into account,” said senior and corresponding author Will Masters, an economist at the Friedman School of Nutrition at Tufts.

The research team also found that the EAT-Lancet diet was 64 percent more costly than the lowest-cost combination of foods that would provide a balanced mix of 20 essential nutrients. The EAT-Lancet diet has higher quantities of animal-source foods and fruits and vegetables than the minimum required for nutrient adequacy, and much higher quantities than are now consumed in low-income countries.

“We found that the global median of the proposed diet would cost $2.84 per day as of 2011. In low-income countries, that amounts to 89.1 percent of a household’s daily per capita income, which is more than people can actually spend on food. In high-income countries, we found that the EAT-Lancet reference diet would cost 6.1 percent of per-capita income, which is often less than what people now spend on food,” said Kalle Hirvonen, the lead author and development economist in Ethiopia at the International Food Policy Research Institute.

Fruits, vegetables, and animal-source foods are often the most expensive components of a healthy diet, but prices vary widely around the world, report the researchers.

To compute the affordability of an EAT-Lancet diet in each country, the researchers drew on retail prices for standardized items obtained through the International Comparison Program, a collaboration between the World Bank and country statistical agencies. They used prices for 744 food items in 159 countries, from which they could identify the lowest-cost combination of items in each country to meet EAT-Lancet criteria.  They then did the same for nutrient requirements, and compared the cost of food in each country to survey data on household expenditure and income per capita from the World Bank’s PovcalNet system.

“Although 1.58 billion is a lot of people, it is actually a conservative lower limit on the total number who cannot afford the diet recommended by the EAT-Lancet Commission. The cost of food preparation and of non-food necessities ensure that an even larger number of people cannot afford that kind of healthy diet,” said Masters.

“Even if many poor consumers were to aspire to consume healthier and more environmentally sustainable foods, income and price constraints frequently render this diet unaffordable. Increased earnings and safety-net transfers, as well as systemic changes to lower food prices, are needed to bring healthy and sustainable diets within reach of the world’s poor,” concluded Hirvonen.

Limitations to the study include that the models count only the least expensive items in each country, so other research would be needed to address the additional costs and barriers to food use imposed by time constraints, tastes and preferences. Additionally, the study used 2011 prices and nationally aggregated data, so next steps include research on variation within countries as well as over time. There is also uncertainty regarding the nutritional content of the foods whose prices were used in the study’s models.

Additional authors on this study are Derek Headey, a senior research fellow at the International Food Policy Research Institute, and Yan Bai, a Ph.D. student at the Friedman School of Nutrition Science and Policy.

This work was supported by the Bill & Melinda Gates Foundation, through a project entitled Changing Access to Nutritious Diets in Africa and South Asia, and another project entitled Advancing Research on Nutrition and Agriculture.

A television studio located at the Friedman School on Tufts University’s Boston Health Sciences campus is available for live and recorded interviews with faculty and researchers. For more information, please contact Audrey Laganas Jenkins at Audrey.Jenkins@tufts.edu or (617) 636-3728.

The International Food Policy Research Institute (IFPRI) seeks sustainable solutions for ending hunger and poverty. IFPRI was established in 1975 to identify and analyze alternative national and international strategies and policies for meeting the food needs of the developing world, with particular emphasis on low-income countries and on the poorer groups in those countries. Visit: www.ifpri.org.