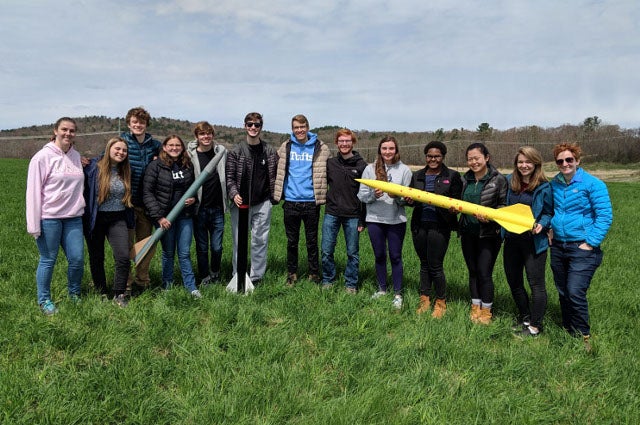 Joshua Harvey, E22, will always remember April 27. That was the day this spring when the rockets named Borealis, and Cowabunga, and Space Bo 1 blasted into Tufts history.

Harvey and his fellow classmates had devoted more than a year to researching and building the rockets—the first such venture at Tufts. Two were built from kits, and Space Bo—“a play on Jumbo,” explains Harvey—was built from scratch.

“My hands were shaking,” he recalled, as the Tufts team set up in a field in Amesbury, Massachusetts. “There was so much building up to this moment; it’s high-risk/high reward. But we did it. I was elated.”

That thrill encapsulates the challenges and rewards relished by members of the Tufts chapter of Students for the Exploration and Discovery of Space (SEDS). Started just last year, Tufts SEDS is attracting students on a quest to engage with all-things space. Their shared passion is finding a creative outlet through programming and various building projects—like rockets and weather balloons—all experiences that could act as a springboard to internships and possible careers in the aviation and aerospace industries.

Tufts SEDS, in fact, arrived on campus just in time to give growing numbers of students a shot at opportunities spurred by growing interest and investments in space travel, from NASA to Elon Musk’s SpaceX to Jeff Bezos’ Blue Origin. (Amazon founder Bezos was president of the Princeton SEDS group as an undergraduate.)

“There is so much more going on than a decade ago, and students are noticing,” said Josh Etkind, E19, who co-founded the club with Sarah Carty, E19, and Justin Hudson, A19. “I see space as kind of where the internet was in the mid-1980s. At first, it was understood only by experts, but then it opened up to everyone. I think the next chapter of society will take place in space, and because of SEDS, the next generation of Tufts students will have an easier time being part of that growth.”

That optimism stems from the successes of Tufts SEDS in its inaugural year. Carty, who was SEDS president as it began, was surprised and delighted when some forty students crowded into a corner of Bray Laboratory for the first general information session. 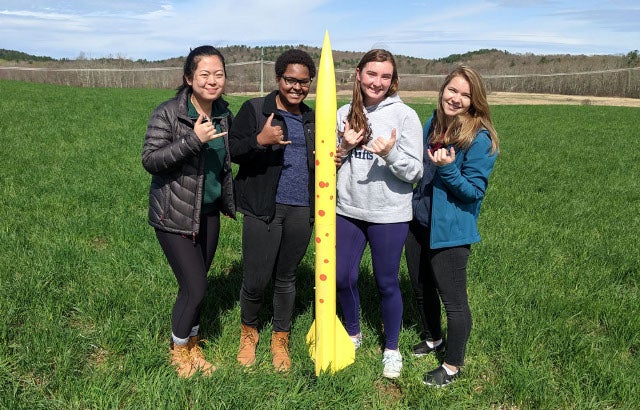 SEDS members at last year’s rocket launch, from left, Rebecca Shen, E23, Maia Taffe, E23, Alex Talbot, E23, and Brigitte Montminy, A23, shown here holding the rocket Cowabunga.
That strong momentum is continuing this year. One team is restoring a radio telescope and another has the ambition to contribute—in collaboration with the Robotics Club—to an international competition that challenges students to design and build the next generation of Mars rovers. Also in the works is a design submission to a competition for a CubeSat—a type of miniaturized satellite supporting research on the International Space Station.

“A lot of us are interested in working in the space industry; we just love space, so we want and need that hands-on experience,” said Max Kaye, A21, chair of the Tufts SEDS board and a double major in math and computer science. “What better way to get that experience than jumping in and building something?”

Harvey added that Tufts SEDS is geared toward attracting students from all fields—from economics to math and engineering—and it offers a balanced mix of fun, like movie nights and field trips, with project builds. What’s most important is summed up in one word: curiosity. “All anyone needs to bring is an open mind,” he said. “It’s for anyone who wants to keep that childlike excitement about space—who wants to never lose it.”

For Chanel Richardson, E20, the current SEDS president, the most rewarding part of being in Tufts SEDs is the building process. Last year she worked with fellow students construct a high-altitude weather balloon. The team dubbed their inaugural mission RUBI, for Rising Up Beyond the Imagination, and launched the prototype in April from western Massachusetts. RUBI reached a respectable altitude of 35,000 feet and spent about four hours aloft, the students trailing it by car to northern New Hampshire.

This year the team is “looking beyond getting the balloon aloft,” she said. “One thing that we’ll try again is picture retrieval; we want to downlink images while the balloon is still in flight.” They are also planning experiments to measure pollution levels and electromagnetic radiation at different altitudes.

Brigitte Montminy, A22, and Andi Gray, A22, also have high hopes for a radio telescope they’re rebuilding. Originally mounted on the roof of Science and Technology Center, the telescope fell into disuse after a snowstorm broke its mount and motor.

Associate professors of astronomy Anna Sajina and Danilo Marchesini said they look forward to seeing it brought back online, this time from the roof of 574 Boston Avenue, the home of the Department of Physics and Astronomy. Both expect to incorporate it into their classes.

Neither Montminy or Gray have experience with radio telescopes, but they’re excited to figure things out. “SEDS is not about being an expert,” said Montminy. “We’re here to learn. It’s all about learning something new.”

And it is these kinds of challenges, they said, that are going to help them establish careers in a fast-moving field that depends on nimble thinking. “It’s always been my dream to work for NASA,” said Montminy. Gray has multiple aspirations—in quality control, as an astronaut, or research, that last a nod to Tufts cosmologist Alexander Vilenkin, director of the Institute of Cosmology and L. and J. Bernstein Professor of Evolutionary Science. “He has really inspired me.”

Harvey said he’s intrigued by space travel. “The question is going to be: how will this change our relationship to space?” he said. He’s especially fascinated by asteroid mining and commercialized space travel.

Carty, who graduated in May, is now a test engineer at Sierra Nevada Corporation, which specializes in satellites and commercial orbital transportation, and muses on a future rich with potential.

“To me, space is the shared dream of humanity,” she said. “That’s what excites me personally about this new wave of space exploration. What I hope for me, and for the club going forward, is that space is not just for engineers. It’s for everybody. We’re going to need artists, scientists, communications folks. Space offers opportunities for everyone to get involved.”