A world-renowned expert in the field of catalysis, she invested in her students to help them succeed 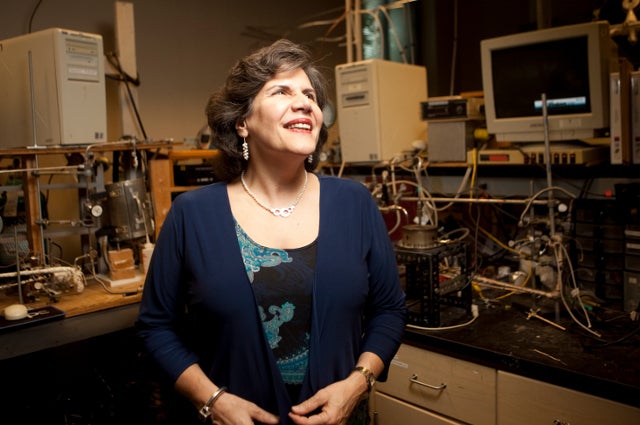 Maria Flytzani-Stephanopoulos, a Distinguished Professor and the Robert and Marcy Haber Endowed Professor in Energy Sustainability in the Tufts University School of Engineering, was a world-renowned expert in the realm of chemical engineering. But at Tufts, where she was a professor for twenty-five years, she was known simply as Miretta.

“Miretta was an incredible scientist, someone who reached the pinnacle of our profession,” said Kyongbum Lee, chair of the Department of Chemical and Biological Engineering at Tufts. “But what I remember most about her is how much she cared about everything she did—nothing was ever half-hearted. And she cared mostly about people—her family, friends, colleagues, and students.”

Flytzani-Stephanopoulos passed away on October 28 at a Boston hospital, surrounded by her family, after a fight with a very aggressive multiple myeloma.

“I was deeply saddened to learn of Miretta’s passing,” said Jianmin Qu, Dean of Tufts University School of Engineering. “She was an intellectual giant in the catalysis field, conducting pioneering research on the use of single atom metal catalysts for reactions related to fuel processing. Globally, her work has critical applications to the production of clean energy and achieving a reduced carbon footprint.”

In honor of her outsize accomplishments, Flytzani-Stephanopoulos was a co-recipient of the American Chemical Society (ACS) Catalysis Lectureship Award for the Advancement of Catalytic Science in 2019. And in 2014, she was elected to the National Academy of Engineering in recognition of her contributions to clean energy technology, one of the highest professional distinctions accorded an engineer.

Her colleague Charles Sykes, a chemistry professor, was the co-recipient of the ACS Catalysis Lectureship Award, which they accepted in San Diego in August. It was the crowning achievement on a ten-year professional collaboration between them.

“When I joined Tufts, I was a really junior assistant professor, and she was a very senior colleague, but she was incredibly generous with discussing her research and co-writing grants with me, which was a great help,” Sykes said. “She was incredibly humble and kind to her colleagues.”

Flytzani-Stephanopoulos invested in every one of her students, Sykes said. He recalled how they would invite her to their weddings or celebrations or ask her to be a guest speaker at their workplaces or classes. “She was really selfless and invested her time in their careers, making them succeed,” he said.

Lee said he was grateful to know Flytzani-Stephanopoulos for most of his adult life, ever since he was a graduate student.

“One of our last conversations—which I did not realize at the time—had to do with science as an endeavor to make lives better, and how that starts with educating people,” Lee said. “She respected accomplished people, and admired people who had integrity and courage.”

Being a pioneer takes integrity and courage—and that’s exactly what Robert Haber, E79, EG80, and with his wife, Marcy, had in mind when they established the Robert and Marcy Haber Endowed Professorship in Energy Sustainability at Tufts University School of Engineering in 2007.

“The Haber professorship was meant to find pioneers in areas of basic research that could accelerate the transition from dirty fuels to clean fuels,” said Robert Haber. “My goal was to set a lofty, heady mandate, and Maria was a perfect choice.  It was an honor to have her be the first person named to this professorship.”

Over the years, Haber and Flytzani-Stephanopoulos met at her office and attended various symposia to discuss her research. And while the agenda was centered around clean energy and catalysis, she also would inquire about his family in a genuine way.

“I was struck by just how much she obviously was a family woman and how much she liked Tufts and her students,” Haber said. “She managed to do something incredibly hard, which is bridge all those family and professional things at the highest level.”

Flytzani-Stephanopoulos leaves an impressive legacy. Her spirit is forever imprinted on the School of Engineering, and it’s difficult to imagine the school without her, said Qu. She was pivotal in the integration of biological engineering into the Department of Chemical Engineering curriculum and a strong advocate for her colleagues during the establishment of the university-wide faculty senate in 2016.

She held ten patents, wrote more than 180 technical papers, was a member of the National Academy of Engineering, and a fellow of the American Association for the Advancement of Science and the American Institute of Chemical Engineers.

Starting in 2002, Flytzani-Stephanopoulos was the editor of the journal Applied Catalysis B: Environmental, a top-ranked journal in the fields of catalysis, chemical engineering, and physical chemistry. Some of the many awards bestowed on Flytzani-Stephanopoulos include the Giuseppe Parravano Memorial Award for Excellence in Catalysis Research, a Space Act Award from NASA, a Career Advancement Award from the National Science Foundation, the Distinguished Scholar Award of Tufts University in 2007, and the Henry J. Albert Award from the International Precious Metals Institute in 2008.

Before coming to Tufts, Flytzani-Stephanopoulos worked at the Massachusetts Institute of Technology and at the Jet Propulsion Laboratory in Pasadena, California.

Sykes said she’ll be remembered as an insightful scientist in the field of single-atom catalysis, an area of science she launched onto the global stage two decades ago, and for her work-hard-play-hard strategy that helped students, from undergrads to postdocs, reach their full potential.

To that end, Sykes said her current batch of graduate students, despite their grief, have been inspired to work even harder to make her proud. “That's a testament to Miretta, that her students are doing their very best to make the most positive outcome of this tragic situation by continuing her legacy,” he said.

Flytzani-Stephanopoulos was born and raised in Greece, and her funeral will take place in a suburb of Athens. She is survived by her husband Gregory Stephanopoulos, the William Henry Dow Professor in Chemical Engineering at MIT, and three children.

A memorial service for Maria Flytzani-Stephanopoulos will be held on February 10 in the Coolidge Room of Ballou Hall on the Medford/Somerville campus at 4:30 p.m.