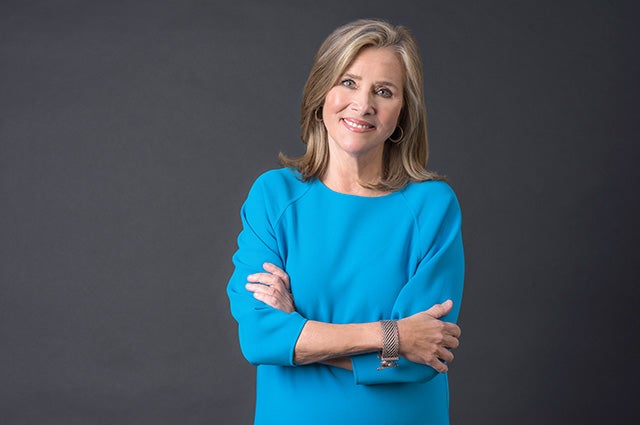 Fourteen-time Emmy Award winner, Meredith Vieira was a longtime co-anchor of Today and has served as a special correspondent for NBC Nightly News and Dateline NBC. She was a 60 Minutes correspondent from 1989 to 1991 and moderator of The View for nine years. The former host of Who Wants to Be a Millionaire? and The Great American Read is now looking forward to hosting and producing 25 Words or Less, a game show returning to television this fall. Vieira, a co-chair of Brighter World: The Campaign for Tufts, looks back on her Tufts education, and how it led her to “some wonderful places.”

A valuable Tufts experience I just happened to take a course in broadcast journalism my senior year. For our final projects, we were divided into groups to create radio documentaries, and in my group, I was the narrator. Bill Shermer, who was the head of CBS radio in Boston, was asked to critique us, and after the class he wanted to speak to me. He asked, “What are you doing when you graduate?” I said, “I don’t know.” And he said, “Well, I do. You have a big future,” and he hired me as an intern on the spot. That’s why I say to people when they go to college: explore. That was what I was doing when I took that course. I had no notion of where it would lead me, but it has led me to some wonderful places.

Best advice when starting out I was fired from my first job, at WJAR-TV in Providence. Back home, I was crying in my bedroom when my dad came in. He asked me what was the matter, and I told him. And he asked me, “Do you think you have what it takes?” I said, “Well, yeah!” And he said, “Then don’t listen to these people. You’re going to have naysayers throughout your life. People who will tell you that you can’t do it. But if you believe you can, you’ll be fine.” So I went in on Monday and confronted my boss and said, “I know I have what it takes and I will succeed.” To his credit, he rehired me. Whenever I’ve had those moments of doubt, and I have them all the time, I think of my father’s words. Sometimes you need to remind yourself that you have that inner strength.

Never give up on yourself At sixty-five I’m just starting a new show with people who believe in me. And how cool is that, to have this new really fun experience? The way I see it, as you get older, you become more valuable.