A serious bike accident hasn't held back Henry, A05, who is a triple threat on the race course 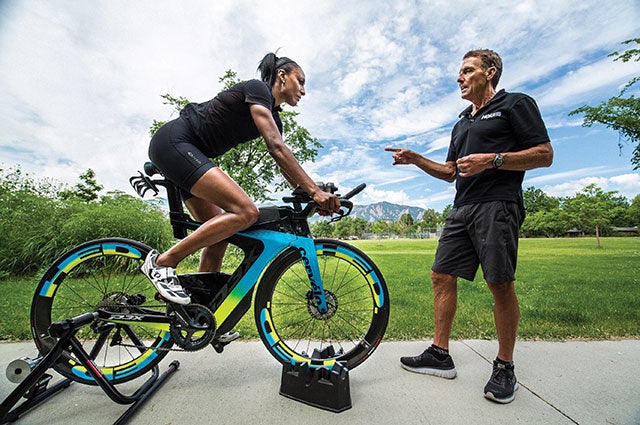 Look fast or you might miss Sika Henry speeding by on a bike. Or on foot. Or in the water. Henry, A05, is a triathlete who has her sights set on being the first African American woman to earn her pro card in the sport.

“I’ve always been an overachiever. I always have these really big goals,” she said. “If I do something, I think, ‘What is the absolute most I can get out of it?’ For me, it would be to compete in the most competitive triathlon fields.”

That Henry is nearing her goal is extraordinary. In April, while racing in a 70.3-mile half-Ironman in Texas, she had a serious bike accident. Her memory is a blur, but she recalls moving to pass a group of cyclists when she apparently hit something. Traveling at twenty-five miles per hour, she flew over her handlebars and went face-first into the pavement.

The crash broke her nose, cracked her teeth, and cut and scraped her face, hands, knees, shoulders, and arms. She needed more than thirty stitches to her face. Her bike was totaled.

But with the support of her family and guidance from her coach, Jonathan Caron, and her mentor, Dan Empfield, Henry healed and began to get back on her feet—and a bike.

“Things weren’t so great the first few months after the accident, but this past month things have been pretty solid, and I’m getting pretty fit,” Henry said. “As long as I can stick to being healthy and where I am right now, I should be OK.”

“Pretty fit” is an understatement. Henry, who earned her BA in economics from Tufts and works full-time as a market analyst in Newport News, Virginia, trains twice a day, every day.

“I either train before work, on my lunch break, or after work. My coach writes my training schedule, so I don’t even have to think about that,” she said. “I put in anywhere from fifteen to seventeen hours of solid training a week, but that doesn’t include strength training and stretching. That’s purely swimming, biking, running.”

Weekends don’t mean a break—quite the opposite, in fact. “I typically do my longest blocks during the weekend, so I’ll ride anywhere from fifty to eighty miles on Saturdays, and I usually do a short run after. On Sundays, I usually do my long run, which is about twelve miles, and then I’ll get on the bike and do an easy hour spin after.”

Henry’s desire to turn pro has little to do with money, sponsors, or glory. It’s about changing the face of the sport. “When I started getting heavily into the triathlon community, being an African American woman, I noticed there was such a lack of diversity,” she said. “I started becoming more outspoken about that and my personal experiences with it.”

She started a blog, which became popular, and joined groups like the Black Triathletes Association. And when she turns pro, she’ll use her status to raise even more awareness about diversity in triathlons.

“It would be cool to be a role model,” she said. “It could get more minorities interested in the sport—people that you don’t typically see. And there are certain things I advocate for, like learning how to swim. Nearly 70 percent of African Americans can’t swim, and triathlon brings that to light.”

Chasing a goal for money or glory brings fleeting joy, Henry said. She’s after a more personal connection. “When someone says, ‘I signed up for my first triathlon because I read one of your blog posts and it really inspired me’— to me, that’s just everything.”