Biomanufacturing can speed production of a low-glycemic sweetener—and may unlock its commercial potential, Tufts researchers say

Imagine a sugar that has only 38 percent of the calories of traditional table sugar, is safe for diabetics, and will not cause cavities. Now add that this dream sweetener is not an artificial substitute but a real sugar found in nature and it tastes like, well, sugar. You’d probably want to use that in your next cup of coffee, right?

This sugar is called tagatose. The FDA has approved it as a food additive, and there have been no reports to date of the problems that many sugar substitutes have—such as a metallic taste, or worse, links to cancer—according to researchers and the FAO/WHO, which certified the sugar as “generally regarded as safe.”

So why isn’t it in all your favorite desserts? The answer lies in the expense of producing it. While derived from fruits and dairy products, tagatose is not abundant and is difficult to extract from those sources. The manufacturing process involves a conversion from more easily obtained galactose to tagatose and is highly inefficient, with yields that may reach only 30 percent. 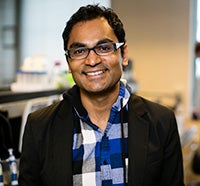 Nikhil Nair, an assistant professor of chemical and biological engineering at Tufts, helped develop a way to produce tagatose using bacteria as tiny bioreactors. Photo: Alonso Nichols
But researchers at Tufts University have developed a process that may unlock the commercial potential of this low-calorie, low-glycemic sugar. In a recent publication in Nature Communications, Assistant Professor Nikhil Nair and postdoctoral fellow Josef Bober, both from the School of Engineering, came up with an innovative way to produce the sugar using bacteria as tiny bioreactors that encapsulate the enzymes and reactants.

Using this approach, they achieved yields up to 85 percent. Although there are many steps from the lab to commercial production, yields this high could lead to large-scale manufacturing and getting tagatose on every supermarket shelf.

The enzyme of choice to make tagatose from galactose is called L-arabinose isomerase (LAI). However, galactose is not the main target for the enzyme, so the rates and yields of the reaction with galactose are less than optimal.

Nair and Bober looked to overcome each of those hurdles through biomanufacturing, using Lactobacillus plantarum—a food-safe bacterium—to make large quantities of the LAI enzyme and keep it safe and stable within the confines of the bacterial cell wall.

They found that when expressed in L. plantarum, the enzyme kept converting galactose to tagatose and pushed the yield to 47 percent at 37 degrees Celsius. But now that the LAI enzyme was stabilized within the cell, it could increase yield to 83 percent at the higher temperature of 50 degrees Celsius without degrading significantly, and it was producing tagatose at a much faster rate.

To determine if they could push the reaction even faster, Nair and Bober examined what might still be limiting it. They found evidence that the transport of the starting material, galactose, into the cell was a limiting factor. To resolve that issue, they treated the bacteria with very low concentrations of detergents—just enough to make their cell walls leaky, according to the researchers. The galactose was able to get in and tagatose released from the cells, allowing the enzyme to convert galactose to tagatose at a faster rate, shaving a couple hours off the time needed to get to 85 percent yield at 50 degrees Celsius.

“You can’t beat thermodynamics. But while that’s true, you can circumvent its limitations by engineering solutions,” said Nair, who is corresponding author of the study. “This is like the fact that water will not naturally flow from lower elevation to higher elevation because thermodynamics won’t allow it. However, you can beat the system by, for example, using a siphon, which pulls the water up first before letting it out the other end.”

Encapsulating the enzyme for stability, running the reaction at higher temperature, and feeding it more starting material through leaky cell membranes are all “siphons” used to pull the reaction forward.

Although more work is needed to determine if the process can be scaled up to commercial applications, biomanufacturing has the potential to improve yields and have an impact on the sweetener substitute market, which was estimated to be worth $7.2 billion in 2018, according to the market research firm Knowledge Sourcing Intelligence.

Nair and Bober also note that there are many other enzymes that can benefit from using bacteria as tiny chemical reactors that increase enzyme stability for high temperature reactions and improve rates and yields of conversion and synthesis. As they look ahead to exploring other applications, from the manufacture of food ingredients to plastics, there will be a lot on their plate.