Why the United States Is the Only Superpower

With so many advantages and strengths, the U.S. towers over its rivals worldwide, despite misperceptions of the threats from China and Russia, says a Tufts political scientist

If you read the headlines on any given day, it seems like the United States is headed for a fall, as rivals China and Russia push their weight around.

But Michael Beckley, an associate professor of political science at Tufts, doesn’t buy that. To him, this is the era of the U.S. as sole superpower, and the country’s domination of the global order should continue for decades, at least.

In his recent book Unrivaled: Why America Will Remain the World’s Sole Superpower, Beckley documents the multitude of U.S. strengths and its rivals’ many weaknesses. That’s not to say America couldn’t decline, due to domestic political divisions and corruption, and lose its sole superpower status. But overall, he says, it’s more likely to thrive.

Tufts Now recently spoke with Beckley about his efforts to rebalance the view of the U.S. and its global rivals.

Tufts Now: You detail many reasons why the U.S. is the world’s preeminent power—what are, say, the top two reasons?

Michael Beckley: First, the United States has a huge lead by the most important measures of national power. China is the only country that comes close, and America still has three times China’s wealth and five times its military capabilities. That gap would take decades to close even if things go badly for the United States.

Second, things probably won’t go badly for the United States, at least relatively speaking, because it has the best long-term economic growth prospects among the major powers. Economists have shown that long-run growth depends on a country’s geography, demography, and political institutions. The United States has an edge in all three categories. 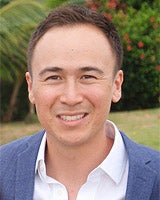 “Russia threatens many U.S. interests,” said Michael Beckley. But it “is not poised to become a rival superpower like the Soviet Union was.”

Geographically, the United States is a natural economic hub and military fortress. It’s packed with resources and has more economic arteries like navigable waterways and ports than the rest of the world combined. Its only neighbors are Canada and Mexico. China, by contrast, has burned through its resources and is surrounded by nineteen countries, many of which are hostile or unstable, and ten of which still claim parts of China’s territory as their own.

Demographically, America is the only nation that is simultaneously big, young, and highly educated. The U.S. workforce is the third largest, second youngest, most educated in years of schooling, and most productive among the major powers—and it is the only major workforce that will grow throughout this century.

China, by contrast, will lose 200 million workers over the next thirty years and add 300 million senior citizens. Chinese workers produce six times less wealth per hour than American workers on average.  More than two-thirds of China’s workers lack a high school education; and one-third of Chinese young people entering the workforce have an IQ below 90, largely a result of malnutrition, poor care, and pollution.

Institutionally, the United States is a mess, but China’s system is worse. The United States is a flawed democracy, but China is an oligarchy ruled by a dictator for life. Special interests drag down U.S. growth and fuel corruption and inequality, but the Chinese Communist Party systematically sacrifices economic efficiency and promotes corruption and inequality to maintain political control.

What about Russia? It has a huge nuclear arsenal, bullies its neighbors and asserts its power farther abroad in conflicts like that in Syria. Should we be more concerned?

Russia threatens many U.S. interests—it menaces U.S. allies, props up U.S. adversaries such as Iran and Syria, murders pro-democracy advocates, meddles in elections, and has recently seized foreign territory near its borders—but Russia is not poised to become a rival superpower like the Soviet Union was.

Russia’s military budget is ten times smaller than America’s. Its economy is smaller than that of Texas and its population will shrink 30 percent over the next thirty years. Russia has no meaningful allies, and it faces NATO, the most powerful alliance in history, on its borders. The United States needs to worry about Russia’s nefarious activities—especially its election meddling and paramilitary encroachments in the Baltics—but it can do so without gearing up for another Cold War.

China and Russia seem to have become united in their opposition to the U.S. Will that create a new power balance?

Russia and China will never form a genuine alliance. They share a 2,600-mile border, compete for influence across Eurasia, and sell arms to each other’s adversaries. But Russia and China still harm U.S. interests by acting in concert on a limited set of issues. 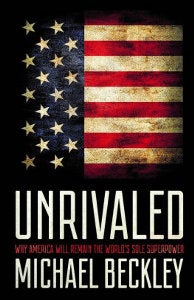 For example, both countries have spent billions of dollars on media outlets, NGOs, and hackers aimed at reversing the spread of democracy and subverting U.S. political institutions.  The two countries also have sanctioned U.S. allies and colluded in the United Nations to block or water down U.S. sanctions on North Korea and Iran.  Most worrisome, China and Russia could simultaneously start wars with U.S. allies—such as a Chinese war with Taiwan and a Russian war in the Baltics—which would severely overstretch U.S. forces.

What’s the value of being the world’s sole superpower?

One benefit is security. As the only country that can carry out a major war abroad, the United States has the luxury of dealing with foreign threats “over there,” far from its homeland, and keeping death and destruction at arm’s length. It is impossible to overstate how lucky Americans are that none of the major battles in any of the wars of the past 150 years were fought in their cities and towns.

Another benefit is a large margin of error. With a secure homeland and a peerless economy, the United States can do stupid things over and over again without suffering severe punishment. Only the United States could engage in a war as dubious as that in Iraq or trigger the worst global economic crisis since the Great Depression, and remain the richest and most influential country on the planet and retain the support of more than sixty allies, including most of the major powers.

A related benefit is freedom of action. The United States can decisively involve itself in any region of the world—or not. Most countries have foreign policy priorities thrust upon them. They are too weak to settle issues in their own neighborhoods and have to spend most of their time doing damage control around their borders. Russia, for example, can’t ignore NATO or EU expansion in eastern Europe.

Similarly, China can’t ignore unrest in Hong Kong, separatism in Taiwan, North Korea’s nuclear weapons, or any of the ten countries that currently claim Chinese territory. As a superpower, the United States has much more leeway to choose where, how, and on what issues it wants to involve itself.

Freedom of action also applies to U.S. citizens. Americans often take for granted that they can travel and do business in many parts of the world using English and dollars and that many international trade and investment rules—and parts of the legal systems of some countries—are based on, if not directly copied from, U.S. law. The U.S. government has many strings it can pull to protect U.S. citizens and their property abroad, too. These privileges all stem from the fact that the United States shapes international customs and institutions.

Finally, the United States gets economic kickbacks from being a superpower. Other countries help finance its debt—because the dollar is the world’s reserve currency and the United States is an especially secure and profitable place to invest—and they are often eager to sign favorable trade and investment deals with it to gain access to the U.S. market and technology or to garner U.S. diplomatic backing or military protection. Perhaps most important, the dominant position the United States holds in the world economy attracts young smart people from all over the world, and the resulting influx of immigrants continually rejuvenates the U.S. workforce.

Why do you think there is a perception that the U.S. is weak—seemingly unable to exert influence in international affairs, from North Korea to Crimea to Venezuela?

One reason is that people wrongly assume that a superpower will always get its way, so when the United States fails, it’s front-page news. Second, because the United States is so powerful, it often tries to do ridiculously difficult things—democratizing the Middle East, winning a war on drugs, convincing North Korea to give up its nuclear weapons—and thus fails more often and more spectacularly than do weaker countries with more modest aims.

Some parts of your book remind me of a stock analyst’s report on a company that’s long been at the top of its game, saying there’s little to stop it from dominating its sector for years, and worthy of an investment. Yet, companies that once seemed invincible—General Electric, for example—can sometimes sink because of incompetent management, increased competition, and changing circumstances. You mention in the book some scenarios that could lead the U.S. to lose power rather than maintain it—can you talk about some of those and what you see as their likelihood?

The most likely scenario would be internal decay. Some great powers have been brought down but by domestic political divisions and corruption rather than the rise of a rival power. It’s not hard to imagine the United States heading down this path. Partisan divisions have surged to levels not seen since the Civil War, gridlock has become the political norm, and special interests increasingly infect U.S. institutions.

As a result, serious domestic problems are getting worse. Inequality and ethnic and cultural tensions are rising. Upward mobility, entrepreneurship, and life expectancy are declining.  The U.S. debt is massive. Infrastructure is generally mediocre. Without functioning political institutions, these problems could spiral out of control.

Your view that the U.S. will maintain its status as the world’s sole superpower is not in the mainstream. Why do you think that is?

One reason is that threat-exaggeration sells. The image of an emerging Chinese superpower helps the Pentagon justify a larger budget, the media sell copy, authors sell books, investment banks sell emerging-market funds, CEOs get the government to pay for job training programs they otherwise would have to pay for themselves…I could go on.

Another reason may be psychological. The grass tends to look greener on the other side. Americans are generally more aware of their own country’s problems than they are of China’s.

Finally, the indicators we typically use to measure power—GDP, military spending, trade volumes—systematically exaggerate the power of countries with big populations, like China and India, because they count the benefits of having a big population—a large workforce and army—but not the costs. China may have the world’s biggest economy and military force, but it also leads the world in debt, resource consumption, pollution, useless infrastructure and wasted industrial capacity, scientific fraud, internal security spending, border disputes, and populations of sick and elderly. These kinds of liabilities aren’t counted in the big headline indicators.

Are there any historical parallels for this unipolar era? Is this era the Pax Americana?

It has sixty-eight formal allies, and it is the only country that can fight major wars beyond its home region, with 587 bases scattered across forty-two countries. Yale historian Paul Kennedy conducted a famous study comparing great powers over the past five hundred years and concluded: “Nothing has ever existed like this disparity of power; nothing.” The United States is, quite simply, “the greatest superpower ever.”