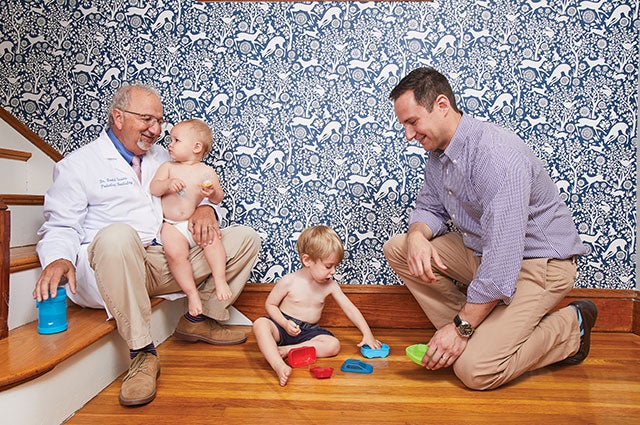 As pacifiers go, Smilo brand binkies have pizzazz. They come in fun patterns such as Fourth of July stars and stripes, psychedelic tie-dye, and geometric glow-in-the-dark (handy for finding in the crib at 2 a.m.). They are made to catch the eye of a parent or parent-to-be.

Beneath the cute decorations of Smilo pacifiers, however, is something far more serious: an orthodontic design grounded in science. Pediatric dentist David Tesini, D75, DG77, AG79, conceived it to prevent the mouth problems babies can develop with heavy pacifier use, problems that happen more often than most parents think. “The most common line I hear? ‘If I had only known,’ ” Tesini said. One study estimated that 30 percent of children who suck a pacifier after the age of two will develop bite misalignments. Structurally, these misalignments can cause chewing and jaw-growth problems. And cosmetically? It could lead to a smile only a mother could love.

When it comes to fixing problems, Tesini has always had an inventor’s spirit. When he learned that dental imprints are as accurate as fingerprints for identifying a person, for example, he set out to develop a way to make dental imprints more readily accessible. He devised a thermoplastic wafer that takes an imprint of a child’s bite, along with a saliva and DNA sample, which can be stored in case the child is lost or abducted. He patented his innovation in 2007 and started a company, Toothprints Inc. Today, impressions have been taken of more than 300,000 children.

In his pediatric practice, a problem Tesini too often saw was young patients with complications from pacifiers. Some kids, particularly those who keep using a pacifier past the age of one, develop a gap between the front upper and lower teeth right where the bulb of the pacifier sits—an anterior open bite. But a bigger and longer-lasting problem develops when the pressure from repeated sucking changes the shape of the mouth. The repetitive strain narrows the upper palate and pulls in the upper molars to the point where they start to slant inward—a posterior crossbite. 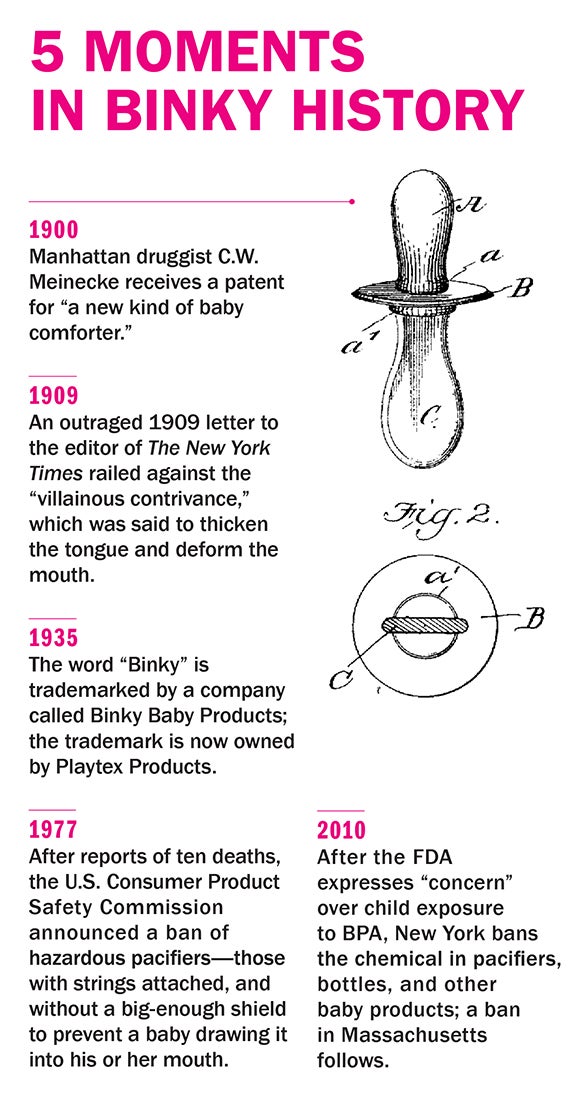 These problems will not happen to every child. There may be a genetic component, Tesini said, and children who use only pacifiers occasionally, or just to help them fall sleep, aren’t at high risk. But for children who use them throughout the day, or who are aggressive suckers, prolonged pacifier use can lead to trouble.

Tesini could have encouraged new parents to skip pacifiers altogether, but pacifiers also have their benefits. In addition to helping children learn to soothe themselves, pacifier use has been shown to cut the risk of Sudden Infant Death Syndrome in half. The American Academy of Pediatrics recommends offering them to infants one month and older at bedtime.

So how to prevent the crossbite and open bite? “I was going to invent a pacifier that would solve both those problems,” Tesini said. But it would be many years before a chance conversation with a patient named Josh Wiesman would make the idea into reality.

Few people know as much about tiny mouths as David Tesini. He opened his private practice in 1977 with Jess Kane D74, DG76, AG78, DG79, and spent many years as associate chief dentist of Tufts Dental Facilities for Patients with Disabilities. He is an associate clinical professor at the dental school, where he teaches a seminar on contemporary topics in pediatric dentistry. In 1988, Tesini, Kane, and John Ficarelli, D73, DG76, founded Project Stretch, a nonprofit that provides free dental care and education to children around the world.

In 1985, Tesini began researching the scientific literature on pacifiers, sketching designs, and making models out of wax and rubber. He worked on prototypes sporadically for some years, but didn’t have the tools and materials to engineer exactly what he envisioned. Eventually, he filed his notes in a folder labeled “1985 pacifier,” and put the project aside. That’s where it sat for more than a decade.

Then, in 2002, a routine dental visit changed everything. Josh Wiesman had been a patient of Tesini’s since he was a child. Even while studying biomedical engineering at Tulane University in New Orleans, he still made appointments with Tesini when he was back in town. It was at one of those visits that Wiesman, then a sophomore, noticed the Toothprints patent on Tesini’s office wall.

“Dr. Tesini,” Wiesman asked from the dental chair, “have you invented anything lately?”

At first Tesini laughed it off. “I think my inventing days are over,” he said. But as they talked, he began to see the spark of a possibility. Wiesman had the engineering skills that Tesini lacked. For his part, Wiesman was looking for a project that would spice up his application for graduate school. Tesini left the room, and returned with a thick, dusty file folder that read “1985 pacifier.” Soon, the dentist and the engineer agreed to work together.

Over the next three years, the new partners worked on designs that they believed would be much healthier than anything on the market. In many pacifiers, the silicone bulb is soft, but not as soft as breast tissue, and repeatedly pushing on it can cause a baby’s upper palate to grow tall and narrow. Later-generation pacifiers feature a wider bulb that angles upward—a so-called “orthodontic” shape—marketed as a better alternative. But this shape can still be problematic, Tesini said. Sucking creates a vacuum in the mouth—think of how your cheeks pull in when you suck on a hard candy—and the sides fold in. In that shape, it, too, becomes a small lump pushing against the palate in a problematic way. 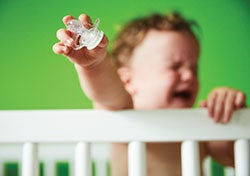 Photo: Kelly Davidson
The pacifier Tesini and Wiesman developed features a wide bulb. Ridges on the inside provide structure to keep it from collapsing laterally, while areas of thinner silicone encourage the bulb to spread out slightly when pressed, distributing the pressure across the roof of the mouth.

To test their design, the pair turned to an outside engineering group, which developed a detailed computer model to predict how well the Smilo pacifier would function compared to others on the market—it took into account the materials, shape, structure, and the forces involved. In the test, their design beat the competition. It was, Wiesman said, “a nice home run.”

In 2007, they licensed their patented design to Tommee Tippee, a distributor for Babies “R” Us. They have now sold millions of pacifiers around the world.

Today, Tesini is sixty-eight and recently retired from the dental practice he owned for forty-two years. Wiesman, thirty-five, is now a professor of the practice at Tufts School of Engineering’s Gordon Institute, where he teaches high-technology entrepreneurship. Last year, they took a new step in their partnership, launching their own brand, Smilo, to encompass their other products. A bottle that their data shows reduces swallowed air (and the subsequent need to burp) by 44 percent. A sippy cup that provides better lip posture and position, important for infants and toddlers learning to use their lips for eating and speaking.

At the company offices in Wayland, Massachusetts, the pair offered a critique of the pacifiers they set out to improve. Wiesman held up one of the most popular pacifiers, which has a simple, stemlike bulb with a rounded tip. “This is actually the worst of all of them, yet it’s given out in a lot of the hospitals,” he said. But because the shape is essentially the same all the way around, Wiesman said, it is inexpensive to manufacture. 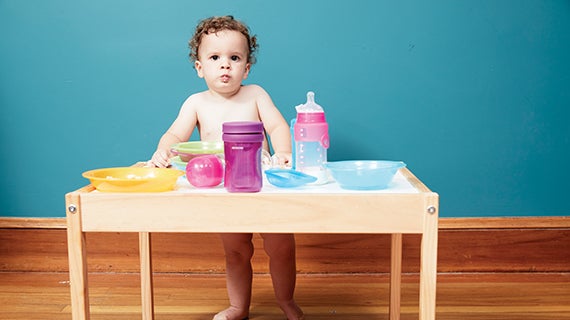 The company launched by David Tesini and Josh Wiesman has recently expanded into baby bottles, sippy cups, and other products. Photo: Kelly Davidson
Tesini and Wiesman are still working on perfecting their own pacifier. Smilo’s most recent patent changes the shape of the shield that holds the bulb so that the shield does not push back on the lower jaw. And Smilo continues to expand its evidence base, with help from Tufts students. Kimon Karageorgiou, E18, is completing a project he hopes to publish on how pacifiers fit in the mouth. Devansh Shah, who is studying biomedical sciences at Tufts’ School of Medicine, and Alex Ziegler, a postgraduate pediatric dental student at Tufts, are working with John Davis, chief of the Neonatal Intensive Care Unit at Tufts Medical Center’s Floating Hospital for Children, to study how different pacifiers may help premature infants learn to suck and swallow.

Part of Smilo’s mission is educating parents—not only about what kind of pacifier to buy, but how to use it. First, Tesini said it’s important to get the right size—Smilo offers three for different ages. Second, parents should schedule a first dental visit for their baby around the age of one, in part so their dentist can look for any pacifier-related damage. And third, by that first dental visit, parents should already be thinking about weaning their child off their soother.

Most of the dental problems associated with pacifiers start to show up around eighteen months, so age one is a good time to think about saying goodbye. As a dentist, Tesini said, “you offer suggestions on how to wean the child from the pacifier.” They run the gamut from making a nice present of the pacifier for the new baby next door to having the tooth fairy take the binky and replace it with a toy.

Doesn’t that cut into his market? Smilo would certainly sell more pacifiers if kids used them longer. But Tesini has his priorities. “I’m a pediatric dentist first,” he said.

Tesini and Wiesman have come a long way in their time together. Wiesman is a father of three, while Tesini has added three grandchildren to his family. Did the babies all use Smilo pacifiers? Some of them did; some never took to a binky at all. But the inventors don’t hold that against them.

Watch more about their work: