Nothing Gets Lost in Translation in the Perseus Digital Library 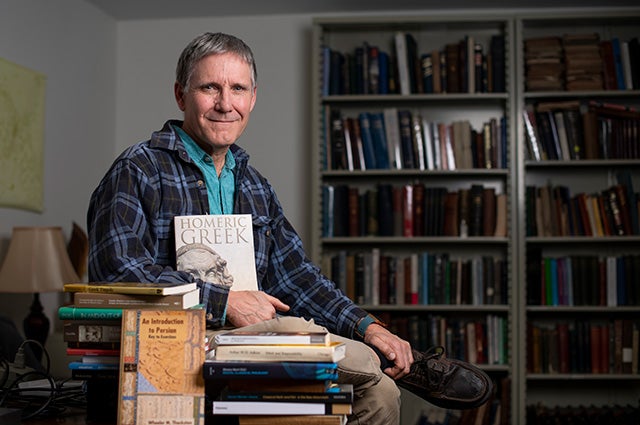 Tucked away in the basement of Eaton Hall at Tufts University is the office for the Perseus Digital Library. As its name suggests, it’s an online library. The office is home to its editor-in-chief, Gregory Crane, a professor of classical studies and an adjunct professor of computer science.

If you’re thinking that’s an unusual combination of professional disciplines, you’re right. But this blend is precisely what makes the Perseus Digital Library unique.

Its mission is to “help make the full record for humanity as intellectually accessible as possible to every human being, providing information adapted to as many linguistic and cultural backgrounds as possible.”

What that means in practice is that if, for example, you’re reading The Iliad or The Odyssey in Crane’s class and don’t happen to know ancient Greek, you can still study the original texts and compare them with the English translations, because the library contains the digital versions and offers web-friendly tools to read them. This allows for a greater cultural understanding of the literature, and a surprisingly immersive reading experience as well.

“We're the only people thinking in a certain way about language,” Crane said. “We have this niche that we're the only ones exploring.” That may be part of the reason why he and the Perseus Digital Library recently won from the National Endowment for the Humanities (NEH) a grant that is (with matching funds) worth $425,000.

It’s the biggest NEH grant received in Massachusetts, and according to Crane, it’s evidence that people are becoming aware of the need for multilingual services in today’s global society. This project builds on a partnership that includes Harvard's Center for Hellenic Studies, Tufts Computer Science Department, and Eldarion.com, a private web development company.

We interviewed Crane to learn more about his take on language and technology.

Tufts Now: Some people think digital reading cannot possibly be immersive. How does the Perseus Digital Library prove them wrong?

Gregory Crane: An interesting perspective for me, when I look at the thread of research and literature that thinks that digital reading is all bad, is that it takes as normative the idea that we read long novels. You have a book, and you read the book, and you get immersed into it.

The problem is to do that, you had to go to a library with an elaborate print infrastructure. You had to have a lot of time to run around, look the books up. You had to learn all these languages. This is where we have an opportunity with the Perseus Digital Library.

What's different now is that many of these sources are available to anybody in the world, and we have tools whereby you can start working with sources in a range of languages at an earlier stage of development. My hypothesis is that the fundamental goals of the humanities—living a reflective life, thinking about the past human record in the present, to make decisions about what the future should look like—do not change. But the mechanisms whereby we may pursue those goals do change.

What motivates you to continue to digitize ancient texts in the twenty-first century?

I think about Netflix. They've run out of English speakers. The only way they can make money is by becoming a global brand with content in many different languages. You see this immense pressure to think beyond just an Anglophone-sourced environment to be attractive in different markets, which means producing not just in English.

These guys have translated twenty-five languages. They're producing stuff in languages I will never learn, and my head explodes.

Then, what happens is I come back to Homer, or I come back to the stuff I work on. These are sources that have established audiences that last over time, and you've got an immense number of resources that are available: dedicated dictionaries just explaining what the words are in Homer, a grammar just about the language of Homer, dozens of translations in different languages over time.

You have this infrastructure, which allows me to think about building a really smart reading environment that would allow you to interact with the Greek without learning any Greek. How would you interrogate a particular passage? How would you think about it? How would you look at it more deeply?

To me, this is not just intellectually important but also a commercially important exercise. Localization means going beyond just throwing subtitles up. My hypothesis is that you would have an audience of people who would be really interested getting past the subtitles.

How are your students using the Perseus Digital Library?

In my class, when we’re reading The Iliad, I make my students look at the Greek. I have people learn the Greek alphabet, which doesn't take very long, because most of the letters are pretty familiar and you can pronounce it.

The exercise I give them is the first word of The Iliad. That first word is translated as anger or wrath. If you look at all the other instances of that word in The Iliad, you realize there are two kinds of people who have that kind of anger, Achilles and gods.

The point is, the poet selects a word for anger, and everybody in the audience realizes it's like divine wrath. Achilles is like some kind of god. You can never get that from the translation. If you look at the instances of this Greek word and see who it's applied to, and then you look at other words for anger, all my students get it, immediately.

This method is not new—I saw the Iliad example implemented with print tools when I was a first-year student in 1975. In a digital environment, we do this kind of exploration with far more texts and with far greater precision. The professor who implemented this in 1975, Gregory Nagy, would later advise my PhD thesis and is now director of Harvard's Center for Hellenic Studies, with whom we are partnering, all these years later. The point is that here, the digital component is important because it allows us to more fully realize very traditional goals and, in so doing, to transform how we work.