Eliza Earle Has an Eye for Adventure 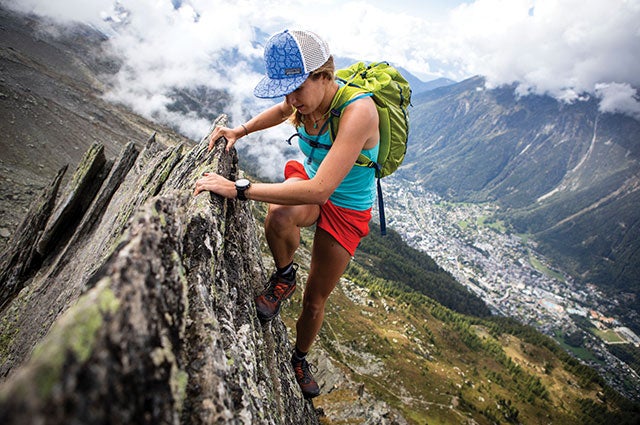 Congenial and down-to-earth, Eliza Earle, A12, is very easy to talk to—if you can manage to track her down. When I reached her in late January, she was in her van in a lot outside Las Vegas, suitcase still unpacked from an expedition to Cambodia. In two days, she’d leave for Patagonia. As we spoke, Earle ticked off longer-term plans: Moab around spring, maybe Chamonix in summer, a stint at Yosemite in-between. “Every two weeks or so I’ll get an email or a call,” Earle said, “and it can be anything from just a one-day shoot to something like, ‘Can you go to New Zealand for the next two weeks?’”

Such is the life of the adventure photographer who resides in a van. Earle is living a wanderlust dream—but it wasn’t her original plan. In fact, growing up in Concord, Massachusetts, she wanted to be an actress. Earle got involved in theater at age ten, studied drama at Tufts, and moved to Los Angeles after graduation to pursue a film career. But it wasn’t long before she was burnt out by Tinseltown’s cutthroat acting scene; a year later, she returned to Boston to reevaluate her life. 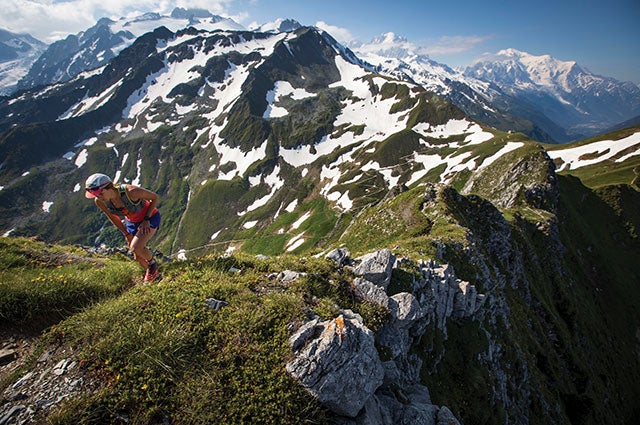 Earle loves trail running with her sister, Alexandra, who lives in Chamonix, France. This photo is from a long run that summited the Croix de Fer above Le Tour, offering a beautiful view of the valley.
Earle wasn’t sure what to do, but she had no dearth of passions. She grew up in an outdoorsy family; her brother Mason is a professional climber, while her sister Alexandra, A14, is a competitive trail runner. She’d recently bought her first camera and was snapping friends and making videos about her weekend trips. She connected with an old Jumbo pal, Ian MacLellan, A12, a professional photographer who offered to spend a summer showing her the ropes. 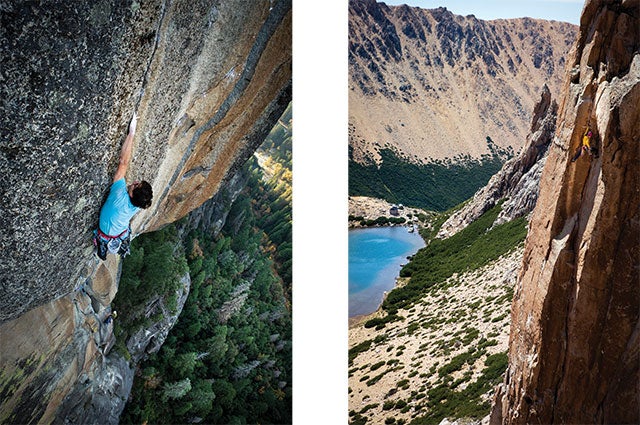 Left: "Most of my friends are climbers and a lot of them are very, very good," Earle said. "It's super fun to spend seasons in Yosemite and photograph them on world-class routes." Here, Jordan Canon climbs Yosemite's Rostrum Roof in autumn. Right: Earle traveled to Patagonia with two other women. This shot shows her friend Rhianon Klee climbing a rock spire called Aguja M2. "We spent a week camped at the base of these walls, and had an incredible time climbing the granite of the Frey area," Earle said.
Although Earle had almost no experience behind the camera, her education in the performing arts lent her a storyteller’s sensibility. “Ian put a camera in my hand on the first day, and I remember telling him, ‘I don’t know how to work this—but if you put it to the settings you need, I know what’s visually compelling,’” Earle recalled. “I knew how to get the right shots, and I was good at the natural arc of stories.”

Soon Earle scored a transformative internship with Sender Films, a rock-climbing documentary company based in Boulder, Colorado. There she learned how to shoot while climbing and began overseeing production, eventually landing a gig as an associate producer. “It was the coolest combination of my passions: photography and filmmaking, and then climbing and the outdoors world,” Earle said. “I started to better understand what direction I wanted to go in.” 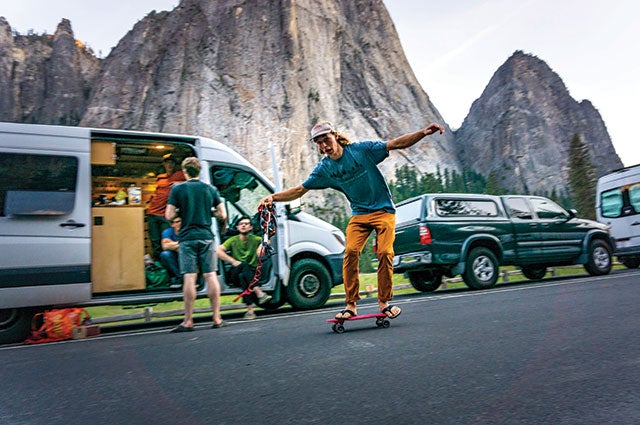 "The community of climbers that I've met over the last few years have turned into my 'on-the-road family,'" Earle said. "I never totally know when I'll bump into them, but it's always a wonderful surprise when I do."
That experience jumpstarted Earle’s growth and success, but her path was not always easy. In 2015, just as her freelance photo career was taking off, her boyfriend, Ethan Gillett, E09, died in a climbing accident in Yosemite. Faced with an unimaginable loss, Earle found herself questioning everything. Photography suddenly felt pointless. “I had a really hard time connecting with anything that felt meaningful,” she recalled. “I had nothing more to lose.” Suddenly rudderless, Earle moved into her Subaru and began living on the road. 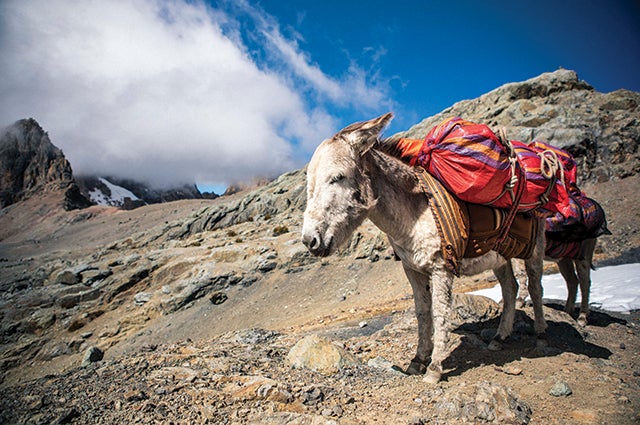 In August 2018, Earle was hired to shoot a week-long expedition in Peru’s Cordillera Huayhuash. “It’s typically a twelve-day trek ranging between 12,000 and 16,500 feet in altitude, but our team of athletes had to complete it within five days,” she said. “We covered roughly twenty miles a day, and although these burros carried most of our camping gear, I had to carry all of my camera equipment in order to shoot continuously.”
Earle might have quit photography altogether if it weren’t for a personal project she started: taking a photo every day. “I hoped that it would keep me present and in day-to-day moments a little longer,” she said. Recording her daily life, then looking back on a year’s worth of experiences, proved profound for Earle: “It totally transformed my photography, as well as my life. It motivated me and engaged me with my surroundings.” 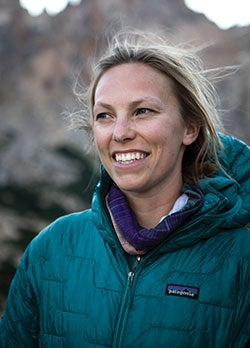 Eliza Earle, A12. Photo: Audrey Sherman
Since then, other personal projects—such as an ongoing series of portraits taken in Yosemite of climbers and friends, some of whom would also go on to die in outdoor accidents—have been deeply meaningful. They’ve kept Earle grounded in a community that has helped her to heal.

Earle has recently upgraded from her Subaru to a 2008 Sprinter van she tricked out herself. It has running water and electricity. She can stand up in it, sleep in it, even bake cookies in it. “It’s my greatest accomplishment to date,” she said with a laugh. Most importantly, it’s allowed Earle the flexibility to go where she wants, to see friends and build fellowship in different places.

Plus, not paying rent or being tethered to one location makes it easy to quickly adapt when she gets calls about photo jobs—which now come from The North Face, Patagonia, Black Diamond, Eddie Bauer, and Google, to name just a few (see her work at elizaearlecreative.com). 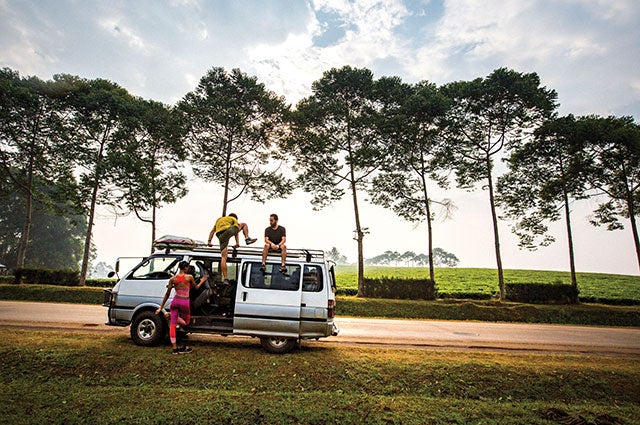 Earle traveled to Uganda and teamed up with Ian MacLellan, A12, to shoot the spring/summer collection for Janji, a New England–based running apparel company. She captured this photo on the side of the road, adjacent to one of many tea farms.
While grief set Earle adrift—and the losses she’s endured still follow her—she’s found a home in photography, which has been both a catalyst and a balm. “I think I am thankful for that—I’m grateful that I was able to turn things around and start to be grateful for things,” she said. “It’s been an interesting path.”

Molly McDonough is a writer and editor and frequent contributor to Tufts Magazine. Send comments to tuftsmagazine@tufts.edu.
Food & Nutrition