José Andrés on the Power of Food

The renowned chef and humanitarian shares his recipe for change: persistence, a little love, and a whole lot of fire 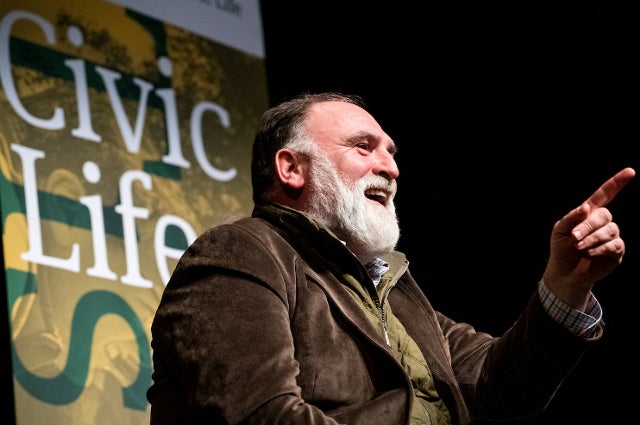 Laughter, applause, and shouts of support were the soundtrack to the December 10 talk by renowned chef and humanitarian José Andrés, H18, who visited Tufts as part of the Tisch College Distinguished Speaker Series.

Twice named to Time magazine’s 100 Most Influential People list and awarded Outstanding Chef and Humanitarian of the Year honors by the James Beard Foundation, Andrés founded the chef-driven humanitarian and disaster relief nonprofit World Central Kitchen, and has received the National Humanities Medal, a nomination for the 2019 Nobel Peace Prize, and an honorary degree from Tufts in 2018.

A bestselling author whose most recent book Vegetables Unleashed came out this year, Andrés owns the company ThinkFoodGroup, which runs his restaurants, educational and philanthropic initiatives, and more.

In conversation with Alan Solomont, A70, A08P, the Pierre and Pamela Omidyar Dean of Tisch College, Andrés had his audience laughing with stories of how he talked the White House into letting him cook for President Barack Obama and Spanish King Juan Carlos, and started a vegetarian restaurant with the very misleading name of Beefsteak (think tomato, he said).

A more serious message emerged as he discussed how food affects everything from the health of our bodies, our society, and our planet to education, activism, and even immigration reform.

“Food is what we do from the moment we’re born, to the moment we die. It’s part of our DNA,” Andrés said. “I believe in the power of food to tell the story of who we are, as a people and as a society.”

Here are three takeaways from the discussion with Andrés.

Control the fire. As a child in Asturias, Spain, Andrés loved helping his parents cook, whether that meant peeling roasted peppers, bringing loaves of bread home from the market, or lending a hand with the fire. To this day, smelling fababa asturiana—a stew of fava beans and blood sausage—or arroz con leche—a rice dish with milk, sugar, and cinnamon—sends a familiar tingle down his spine. 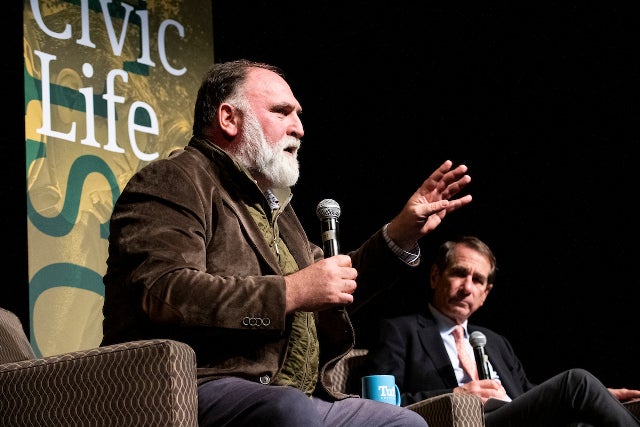 “We have that feeling too much that we love this, we support this—but then we are not willing to commit ourselves to that thing we love, to make it happen,” said José Andrés, here with Alan Solomont. “If we don’t change that, we’ll never fix anything.” Photo: Alonso Nichols
“It’s like it’s planted in our DNA, that connection to where we come from,” he said. “If we are really able to think, to listen, to smell, I believe we can all somehow be connected to that early childhood of ours, almost from the moment our mother fed us the first time.”

But the experience that shaped Andrés the most took place one weekend when his father made a giant paella for all their friends and family—and wouldn’t let Andrés cook, instead putting him in charge of the fire. Seeing that Andrés was upset, his father pulled him aside after everyone had left and revealed that the fire was actually the most important part of cooking.

“He said, ‘My son, if you control the fire, then you can do any cooking you want.’ I have taken that with me to every part of my life,” Andrés said. “Let’s learn what our fire is—let’s try to control it. Then and only then, can we do any cooking we want.”

Put solutions on the table. Andrés’s mother was a master of culinary magic, transforming leftovers into croquettes for lunch, or a tiny piece of meat into a hearty stew with chickpeas, garlic, and carrots. From her, he learned how to turn a little into a lot—knowledge that could serve Americans well in these tough economic times.

“People don’t know what to do with a kilo of chickpeas. They don’t know what to do with a whole chicken. They don’t buy a whole chicken—they go buy chicken breasts, when the difference is $4-5 dollars per pound,” Andrés said. “People don’t have the knowledge of feeding a family with very little. I believe this is a talent that as a society, we cannot lose.”

“‘We the people’ means all the people—when we do well, and we when we don’t do so well,” Andrés said. “To take away food stamps from 700,000 people is the most un-American thing anyone could ever do.”

It’s unfair to take support away without putting a new solution on the table, he said. “People talk about big versus small government—nobody ever talks about the right sizing of our government. Sometimes we need more, sometimes we need less, but nonetheless, we need to make sure the system works.”

Stop talking, start cooking. Arriving in Puerto Rico after Hurricane Maria hit in September 2017, Andrés and his team at World Central Kitchen were greeted by chaos—there was no electricity, the water was rumored to be contaminated, and aid workers were struggling to fly in bread for 3.7 million people, with no real plan in place.

What Andrés and his team did next was simple. “We’re cooks. We know how to gather helpers and how to find kitchens, and more importantly, we always know how to find food,” he said. In twenty-four hours, they had gotten four bread factories up and running and were making bread.

“Sometimes the bigger problems we face in humanity have simple solutions. But they don’t happen when we’re in a continuous meeting about how to solve them,” Andrés said. “What we did was plant the seed and show others that what they had to do was what we were doing—boots on the ground, stop talking, stop planning, and start cooking.”

Responding to a question from a student about cooking and activism, Andrés said the same. “You have to have the spirit inside you to stop talking and start doing,” Andrés said. “We have that feeling too much that we love this, we support this—but then we are not willing to commit ourselves to that thing we love, to make it happen. If we don’t change that, we’ll never fix anything.”