Not wanting to choose between a career as a researcher or a doctor, this Ph.D. student chose a veterinary path 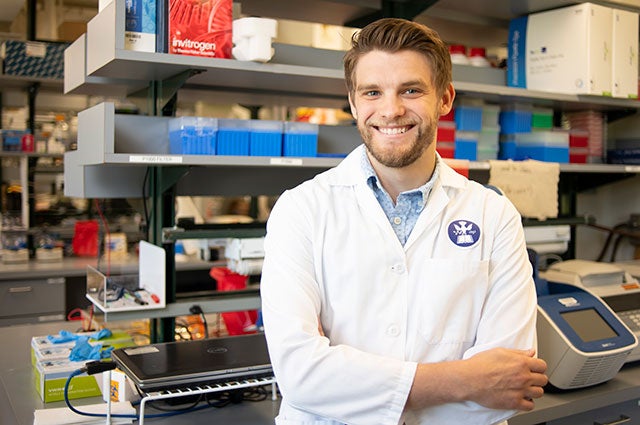 It’s hard to think of a profession—never mind an education—that would allow someone to study flu at the molecular level in a laboratory, work with families who donated loved ones’ bodies to science, and still learn about dentistry. But that’s just a taste of what Jonathon “JJ” Stone has already been involved in at Cummings School—confirming for him that veterinary medicine offers unparalleled opportunities in terms of diverse career opportunities.

Unlike many students at Cummings School, Stone did not want to be a veterinarian from the time he was a small child. But he did, however, always love science.

“I was really into chemistry for a while, then I thought I wanted to go into biotechnology and study renewable energy,” recalled Stone. He attended Rochester Institute of Technology as an undergraduate, and it was there that he realized just how much he loved medicine. “I started working in a gene-regulation lab, and from that point on I was interested in doing some sort of medicine-based research as well,” he said.

Initially he wanted to combine an M.D. with a Ph.D., but he learned of an alternative when he started hanging around with some classmates in a pre-veterinary student group. “I hadn’t known that there were specialties in veterinary medicine,” he said. “I discovered all these nontraditional veterinary careers besides being a small- or large-animal practitioner,” such as in veterinary pathology and lab-animal medicine.

Convinced that a dual D.V.M./Ph.D. degree would deliver the education and professional options he was looking for, Stone applied to Cummings School of Veterinary Medicine, which offers three options for earning a D.V.M. combined with a Ph.D. Stone was accepted into a track in infectious disease offered through the veterinary school’s Ph.D. in Biomedical Sciences Program.

The only dual Ph.D./D.V.M. student in the Class of 2022, Stone will spend his first two years at Cummings School taking veterinary classes. He’ll then take a break from the D.V.M. curriculum to complete his Ph.D.—within three years, he hopes—before finishing the last two years of his veterinary education.

Although the D.V.M. curriculum takes up the vast majority of his time, he is finding time to be a student researcher, too. Under the mentorship of Professor Jonathan Runstadler and postdoctoral researcher Kate Sawatzki, Stone recently helped investigate which viruses and other pathogens may have affected seals that were part of a large epidemic in the North Atlantic last year. He plans to later conduct his Ph.D. research in the Runstadler Lab, on avian influenza—a major focus for that team.

Stone also found a way to tap into a passion he developed while working for the Sight Society of Northeastern New York—an organ bank for human cornea and eye donations.

Over three years working at the eye bank, Stone did a little bit of everything. He made donation arrangements with donor families and traveled around to hospitals to do the actual ocular recovery. He managed the transplant process for surgeons, learning about new sight-sparing techniques and getting to interact with their patients—the recipients of the donations.

“It was just one of those things I fell into that I didn’t know was a career,” Stone said. “You see the whole process, from death to transplant.”

He met the parents of a deceased child who decided to donate her organs—and later met a sixteen-year-old who lost his vision after getting a corneal infection from improperly wearing his contacts who had his sight restored, thanks to a similar donation.

Stone reached out to the faculty and staff who run the deceased-body-donation program to see how he could help honor those owners who turn a painful loss into something positive for science. With a community-outreach grant from the Elizabeth A. Lawrence Endowed Fund, he launched a donor recognition program.

Now students, veterinarians, and researchers routinely come together to send owners who donate a note expressing their condolences and appreciation for the learning and teaching difference the pet made after death.

As for his exposure to clinical medicine at Cummings School, Stone said, “every time I get an opportunity to observe a new area of medicine, it seems so cool that it’s overwhelming.”

He said that even has been true of specialties he assumed he wouldn’t be interested in, such as dentistry. “I thought, ‘I can’t see myself just doing teeth all day,’” Stone said. Then his dog, a pug mix, needed oral surgery. When the dentist found that Stone was a veterinary student, she invited him to shadow her team.

“I spent all day with her,” Stone said, “I realized, ‘This work is amazing.’ And then she told me that certain veterinary specialties offer part-time residencies where you can structure them around your schedule, which is always a benefit.”

“That is why veterinary medicine is so appealing to me,” he said. “There are just so many possibilities. You’re more or less free to build whatever career you want once you have your D.V.M.”