An S.O.S. for Australian Wildlife 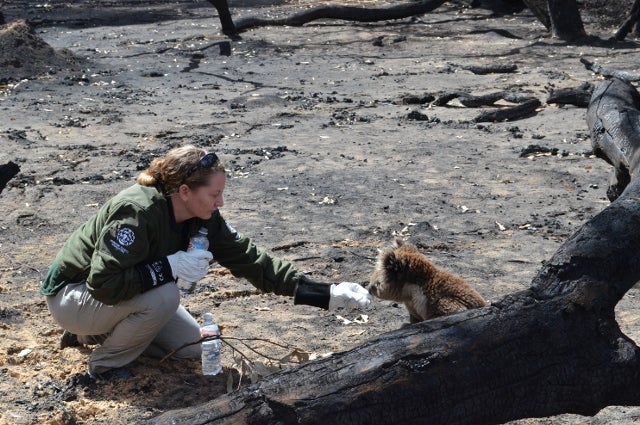 Almost thirty people have died and thousands of homes have burned as wildfires have rampaged through Australia, but it is the wildlife that has borne the biggest brunt of the devastation.

An Australian ecology researcher has estimated that more than one billion wild animals will die from the ongoing wildfires. That figure takes into account both animals killed by the fires and those that will die from starvation and lack of shelter as a result of habitat loss.

Tufts Now checked in with five Cummings School alumni and faculty members on the ground in Australia to learn more about the impact of the fires on animals—wildlife and livestock—and to learn how people can help.

Kelly Donithan, VG12, the senior specialist in disaster operations for Humane Society International (HSI), had a hard time believing there could possibly be so many—until she arrived on Kangaroo Island to lead wildlife-rescue efforts. Almost half of the 1,700 square mile-sized island, located south of Adelaide, has burned, with up to 30,000 koalas alone estimated to have been killed so far. 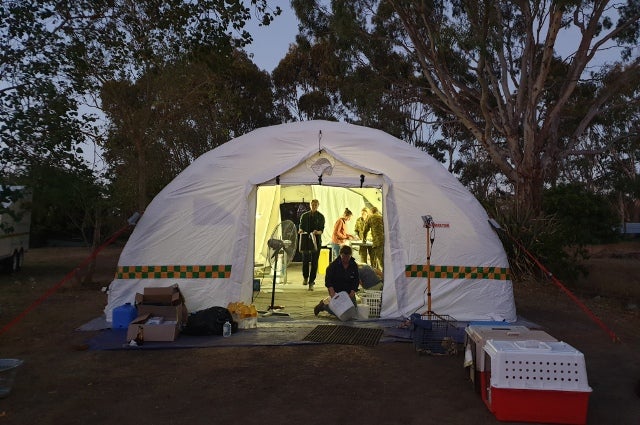 Animals affected by Australia's wildfires are assessed and treated at a field veterinary hospital at the Kangaroo Island Wildlife Park. Photo: Erica Martin/HSI/Australia

The scene there was “apocalyptic,” she said. “There’s no color—just powdery ash everywhere.” With fires still flaring up around the island, she and other HSI staff have been searching for animal survivors. “Our effort is primarily about reducing and eliminating individual suffering,” said Donithan, who received an M.S. in conservation medicine from Cummings School.

Donithan had never seen so many dead animals during a disaster response. “The ground is just littered with corpses. You can’t walk a couple feet without stumbling across another one,” she said. “You find charred bodies of koala females with their joeys lying next to them, but also wallabies, kangaroos, and goannas.” (Wallabies are marsupials, and goannas are a type of lizard.)

The widespread destruction of vegetation represents “a starvation event for many of the animals that didn’t perish in the burn,” Donithan said.

Still, “the animals left alive are moving around, looking for food,” Donithan said. And the rescuers have been pulling out some animal survivors every day, even in places where the fires raged through a week before.

Although the koalas seen in news reports calmly living in a rescuer’s car or sitting on rescuers’ laps may appear grateful for the help to our eyes, their behavior shows just how much stress they are under.

“If I can get close enough to pick up a koala, we know that it is compromised,” Donithan said. “First of all, because they’re on the ground—which is never the case—and also because they’d never let you get that close to them in a normal situation. So far, I’ve only had one try to jump away.” (Some species, such as kangaroos and birds, still actively try to avoid capture, despite significant heat stress or injury, said Donithan.)

Although koalas normally hydrate through the leaves they eat, a few immediately sipped water out of bowls offered by rescuers. “They’re just so, so thirsty,” Donathin said. 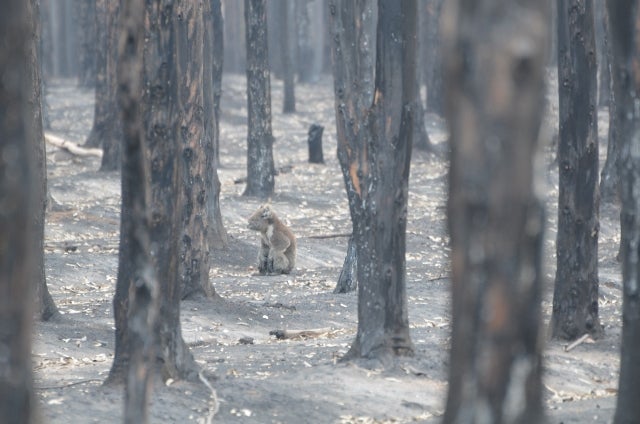 Whenever necessary—and possible—the rescuers on Kangaroo Island transport injured or heat-stressed animals for medical care. Donithan estimated that hundreds of animals had been brought to a military-style field hospital set up by South Australia Veterinary Emergency Management at Kangaroo Island Wildlife Park for triage and treatment. She said 80% of them so far had survivable injuries, although all the animals’ long-term prognosis remains guarded.

The number of saved animals ultimately “pales in comparison with the number you find dead.” Donithan said. But the HSI team continues to draw hope and motivation from each animal they find alive. “Our team mantra has become ‘one by one.’”

“They’re still out there,” she said. “Last night, in an area where we had searched the first day and found nothing, I heard birds calling. I started walking toward them and ended up finding a young koala at the base of the tree. I was able to pick him up and syringe-feed him water, and we got him to the vets. We’ve since pulled out three other survivors from that area, including a female koala that had a little pink joey in her pouch that’s still doing well.”

North of Kangaroo Island—in Adelaide, the capital of the state of South Australia—veterinarian Casey Gibbons Tucker, V13, has been treating animals injured from fires that hit in December.

The small-animal clinic where Tucker works around Christmas experienced a large influx in cases of wildlife that were either burned or extremely heat-stressed from the nearby fires. 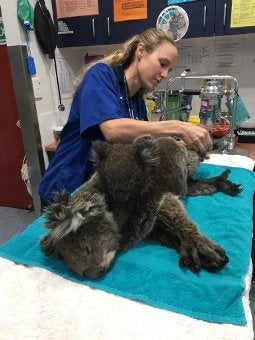 In addition to seeing wildlife cases at her day job, Tucker has been volunteering at a temporary koala hospital overseen by Adelaide Koala Rescue in a local elementary school’s gym. (“It’s summer here, so the students are on summer vacation until the end of January,” said Tucker. “The rescue group is working on a new location for when school starts again.”)

Tucker said more than 100 koalas are living in pens in the gym, which is staffed around-the-clock by volunteer veterinarians, veterinary nurses, and nonmedical volunteers. “Not all the koalas have burns,” Tucker said. “But a lot of them are sick, some from heat stress. South Australian koalas are prone to kidney disease, and sadly we are seeing a lot of them go into kidney failure, which seems to be exacerbated by the stress and dehydration.”

“Ensuring adequate nutrition is very challenging, particularly given that koalas are only able to eat certain types of eucalyptus leaves,” said Cummings School adjunct assistant professor Claire Sharp, a senior lecturer and emergency care and critical care veterinarian at Murdoch University in Perth. “So keeping them supplied with fresh leaves is occupying many people’s days, day in and day out.” Burn care is also very labor intensive—requiring frequent bandage changes of burned areas and good pain relief to keep animals as comfortable as possible.

A Long and Difficult Recovery

For example, Kangaroo Island is home to Australia’s only population of koalas free of chlamydia, a sexually transmitted bacterial infection that causes blindness, female infertility, and death in koalas. “For this reason, it is vital that rescued koalas from one area not mixed with rescued koalas from another area, otherwise disease transmission may occur to naïve populations, further risking their health,” Sharp said. 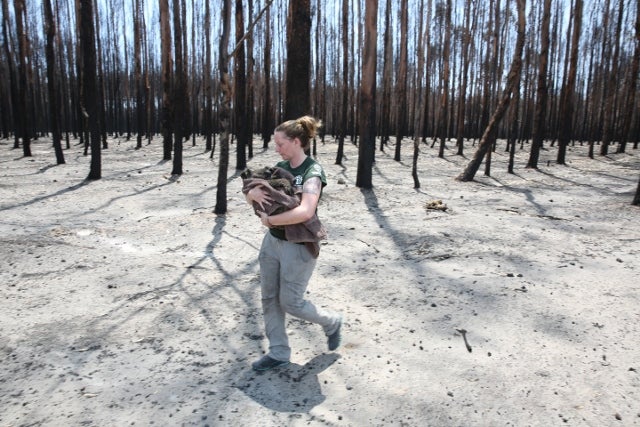 Many rescue groups are caring for large numbers of orphans, some with burns, but many injury-free—the marsupials protected in their mothers’ pouches from the fire. Rocklily Wombats, a wildlife refuge in the Wombeyan Caves area, about 100 miles southwest of Sydney, gives an idea of what it costs to help wildlife, said Esty Yanco, VG16.

“Their property was entirely burnt,” said Yanco, who has an M.S. in conservation medicine from Tufts and is pursuing at Ph.D. in socio-ecology at the Centre for Compassionate Conservation at University of Technology Sydney. “They’re now distributing water and feed to all the animals that they have rescued and have been released in their vicinity—and it costs them at least $80 per day.”

Food drops are occurring for the animals that remain in isolated areas of bush where there is nothing left for them to eat, Sharp said, and hopefully enough of the bush will regenerate quickly to provide them with ongoing food sources.

Much of the Australian landscape and vegetation is fire-adapted—with eucalyptus trees needing some fire or heat to germinate, explained Cummings School adjunct professor Robyn Alders, a nearly lifelong resident of Australia who grew up on a beef and lamb ranch.

But “these fires have been so hot that in too many places, everything has been incinerated,” said Alders. “The fires’ ferocity and heat may make it difficult for certain subspecies that already had low numbers to pull through. It will probably be ten to twenty years before we know the full impact.”

A Nation Under Stress

Of course, wildlife aren’t the only ones hurting in Australia. More than 17.9 million acres have been burned across Australia’s six states. New South Wales has been hit the hardest, and more than 100 fires are still burning there alone. Some of the largest fires have been burning for months.

Sheep and cattle have died in large numbers, too. The Wall Street Journal reported that more than 6,200 livestock animals having been killed by fires in New South Wales alone. Meanwhile, the Washington Post reported that Australian agriculture officials say at least 100,000 cattle will die before the fires end.

Over on Kangaroo Island, Donithan said some farmers lost thousands of sheep in a day. “That represents not only massive hits to livelihoods, but also an incredible emotional toll,” she said. “So as much as HSI is here for the wildlife, we want to be here for the community, too.”

How to Help from Afar

Those at the forefront of the relief effort for affected wildlife include WIRES (the Wildlife Information, Rescue, and Education Service) in New South Wales, Vets for Compassion, Port Stephens Koalas in New South Wales, Currumbin Wildlife Hospital in Queensland, and Adelaide Koala Rescue in South Australia.

Humane Society International will support Australia both through wildlife search and rescue while the fires are still active, but also by supplying hands-on assistance, funding, and supplies to support rehabilitation of the animals until there is suitable habitat for them to return to.

The Australian Veterinary Association Benevolent Fund helps Australian veterinarians in crisis. “Many veterinarians have lost their practices and/or homes in the fires, and many are providing free veterinary care to affected wildlife and pet animals affected by the crisis,” Sharp said.

Veterinarians and veterinary nurses/technicians who want to physically help can contact Vets Beyond Borders.

Veterinarians for Climate Action—a group started by veterinarians in Australia—works with veterinarians around the globe who want to use their roles as trusted sources of information to improve quality of life for humans and animals. For example, as a merino sheep farmer and head of her local farmers’ association, Robyn Alders is working to promote regenerative agricultural practices shown to improve moisture in the topsoil by increasing soil organic carbon levels—along with encouraging farmers to plant strips of land with indigenous vegetation to provide shelter and feed for wildlife. —GR