Youth support in Iowa highest for Sanders, followed by Warren and Buttigieg 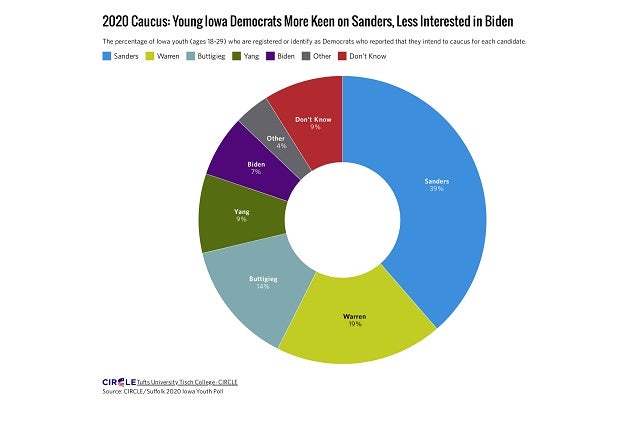 More than a third (35%) of young Iowans (ages 18-29) surveyed say they are “extremely likely” to caucus on Feb. 3, 2020, which, if the survey results mirror actual participation, would represent a three-fold increase over estimated youth participation in the 2016 caucuses. Young Iowans who are registered or identify as Democrats are supporting Sen. Bernie Sanders by a substantial margin: 39% intend to caucus for Sanders, followed by 19% for Sen. Elizabeth Warren, 14% for former Mayor Pete Buttigieg, 9% for entrepreneur Andrew Yang, and 7% for former U.S. Vice President Joe Biden. On the GOP side, according to our poll, 85% of young Iowans who are registered or identify as Republicans intend to support President Trump.

“This poll comes at a pivotal time for young people’s electoral participation, following on the heels of the 2018 election when young people’s activism and peer-to-peer outreach propelled a doubling of youth turnout that was decisive in some races,” said Kei Kawashima-Ginsberg, director of Tisch College’s CIRCLE. “While Iowa is only one state, and its population is not representative of voters nationally, our poll suggests that the trend of higher youth participation may well continue in 2020 and beyond.”

The CIRCLE-Tisch College/Suffolk University Iowa youth poll was conducted with the Suffolk University Political Research Center. It surveyed a representative sample of young Iowa residents (N=500), ages 18-29, who are eligible to vote, regardless of their voter registration status. Most respondents were contacted by mobile phone. This survey was conducted between Jan. 15 and Jan. 20, 2020 and is based on live telephone interviews of adults who indicated they were residents of Iowa. The margin of sampling error for results based on the total sample is +/-4.4 percentage points. For more on the poll’s methodology, see here.

CIRCLE is a nonpartisan, independent, academic research center that studies young people in politics and presents detailed data on young voters in all 50 states. CIRCLE is part of Tufts University’s Jonathan M. Tisch College of Civic Life. Recognizing that young voters are diverse in many ways, and that Iowa’s young people are not representative of youth nationally, CIRCLE will also release exclusive polling on youth in Texas and nationally in the coming months.