A Day in the Life of a Whale Researcher 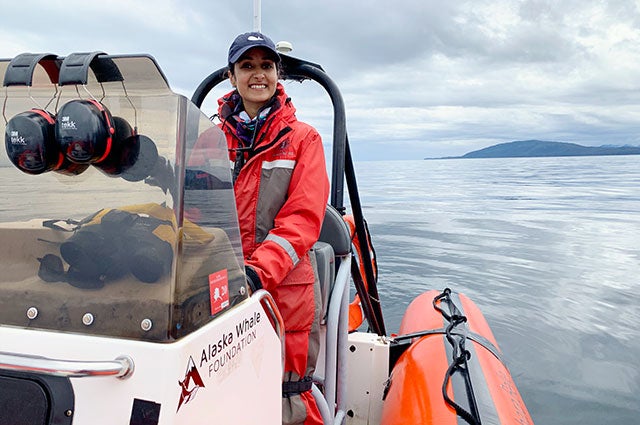 I woke up in the wee hours of the morning to the musical melodies of songbirds chirping away and the boisterous barks and grunts of sea lions in the distance. I crawled out of my cozy sleeping bag and exited my tent into the brisk Alaskan air. The sun never really sleeps there in the summer—and neither does the wildlife, which was one of the great pleasures of sleeping outside on the roof of a boat.

It was the summer of 2019, and I was completing my M.S. in Conservation Medicine degree at Cummings School of Veterinary Medicine. I spent my externship assisting the Alaska Whale Foundation with their ongoing research projects examining the health and behavior of humpback whales in Southeast Alaska.

Whales are among the largest and most intelligent species to inhabit this earth. I have always been drawn to these enigmatic creatures and stunned by their unparalleled beauty. Although populations have begun to recover following the moratorium of commercial whaling, whales globally continue to face threats from vessel-strikes, harassment, habitat deterioration, entanglement in fishing gear and marine debris, and declining prey availability. 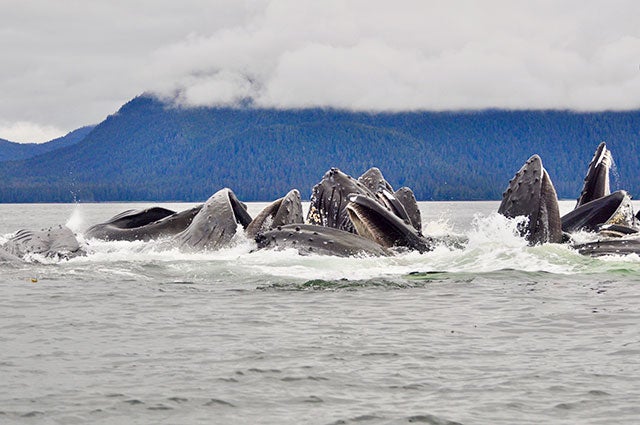 Following a hearty breakfast of oatmeal, the team mobilized. As designated photographer, I geared up in my mustang suit for a day out on the water in the zodiac. Travelling with a research vessel on either side of Chatham Strait, we headed towards the Gulf of Alaska in search of the small subset of the Southeastern Alaskan humpback population that engage in bubble-net feeding behaviors. Humpback whales are a migratory species; the North Pacific population spends their winters breeding in Hawaii and Mexico, then returns to their foraging grounds in Alaska each summer to feed primarily on krill and juvenile herring.

Bubble-net feeding is a complex and coordinated foraging method that involves groups of distinct individuals, each with a designated role. The group dives together and circles beneath their target, vocalizing to disorient their prey and blowing a wall of bubbles in a spiral to trap and form a concentrated prey ball. As soon as the prey is in place, the whales’ surface and begin to lunge in a feeding frenzy. The whales then dive, and the cycle repeats. It is truly one of the most unbelievable sights to witness! 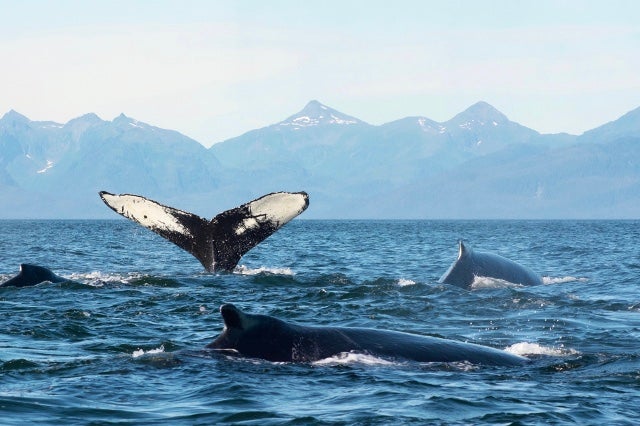 Bubble-netting humpbacks dive down following a successful lunge-feeding event. Photo: Anjali Narasimhan
Using a transect survey system, we followed our map for predetermined distances and stopped at each marked point for a timed 15 minutes. During this time, we used binoculars to scan the waters while keeping our ears open for whale blows and dropped a hydrophone in the water to listen for any vocalizations. Humpbacks are known to vocalize a characteristic song consisting of long squeaks and moans that can travel hundreds of miles and be detected through a hydrophone. We repeated this survey process throughout the entire day, travelling over great distances, until a target group of bubble-netters was detected.

There was never a dull moment when we were on survey as we were always surrounded by the picturesque snowy top mountains. We frequently passed groups of floating sea otters, spotted brown bears scavenging in intertidal zones, and had the daily pleasure of being visited by playful Dall’s porpoises that caught rides on the waves coming off our bow and zigzagged around our boat.

Having not had any luck finding bubble-netting humpbacks that morning, we moved onto our next survey point, which was located within an isolated inlet. That’s when we encountered a pod of orcas. The male’s prominent dorsal fin stood tall above the water, and subadults could be seen in the distance heading our way. 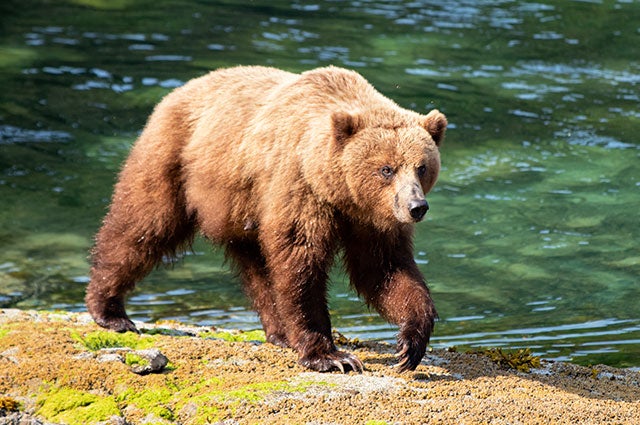 Brown bear fishes for spawning salmon in a stream near the intertidal zone. Photo: Anjali Narasimhan

We shut off the engine and waited. Camera at the ready, I was prepared to capture shots of their dorsal fins and saddle patches for identification. The curious subadults began spyhopping inquisitively around our zodiac, whistling and clicking playfully. Elated, I squealed with pure and utter joy. To add to the excitement, a mom and calf carrying a peachy-orange shade of a newborn joined in the fun by leaping out of the water and fin slapping. 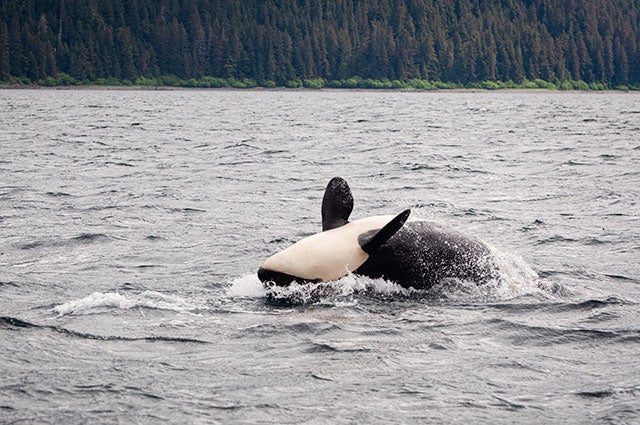 An orca calf playfully leaps out of the water. Photo: Anjali Narasimhan

With the orca-identification photographs complete, we began travelling to our next survey point. On the way, we received a radio call from our other research vessel affirming bubble-netters and, as we jetted off to their location, I could feel my heart pounding with excitement.

On arrival, the waters were still with no sign of whales. However, the abundance of seabirds circling and squawking above, and the distinctively pungent fish smells from lingering whale blow indicated their presence. Large bubbles began to appear in a circle formation on the water’s surface, which could only mean one thing—bubble-netters!

All of a sudden, the waters were teeming with whales. They dramatically burst through the surface, lunging in every direction, herring flying through the air. Nothing compares to the majesty of humpback whales, which range from twelve to sixteen meters in length and weigh more than thirty tons. 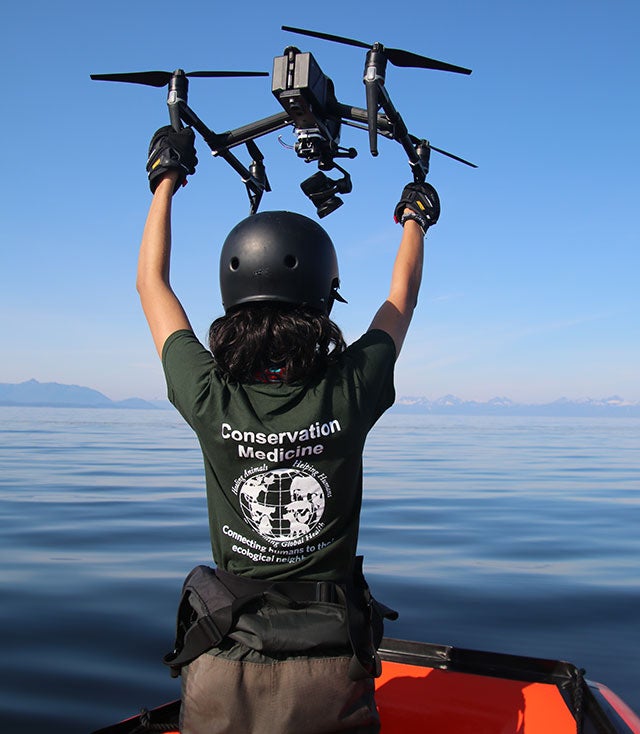 With all this fast-moving whale action, I was frantically shooting images to capture the flukes of each whale, working with the drone pilot to pair my images to the drone flights. Humpback whales’ tail flukes have a pattern, shape, and trailing edge that are as unique to each individual whale as fingerprints are to us. The fluke acts as a billboard to advertise the identity of the individual. In addition, each dorsal fin had to be photographed and matched to each fluke, which is no easy task with groups of more than twenty actively feeding whales.

Once the images had been captured, we moved in to obtain tissue biopsy samples using a crossbow and a specially designed dart that penetrates the skin, collects a few centimeters of blubber, and bounces back out. We spent hours working to document and collect samples from these bubble-netting groups. This data not only supports the Alaska Whale Foundation’s ongoing research but additionally furthers the understanding of the state of the Southeastern Alaskan humpback whale populations to assist in conservation efforts in this region. 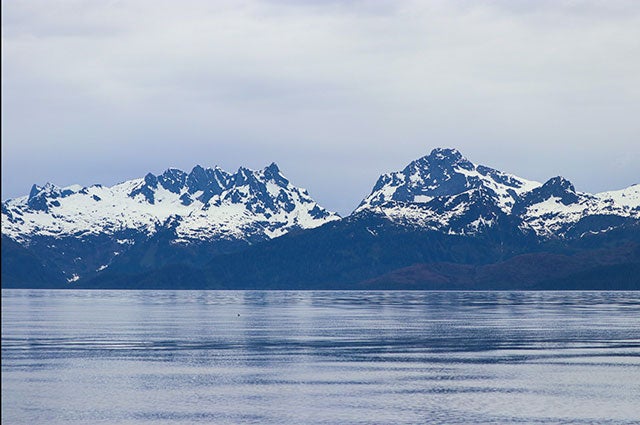 Glassy ocean waters and snowy top mountains, the scenic backdrop of Anjali Narasimhan’s humpback whale surveys. Photo: Anjali Narasimhan
Sitting out on the water surrounded by humpbacks was incredibly humbling and fueled me with infinite curiosity, awe, and affection for these magnificent creatures. It was truly a privilege and an honor to encounter and study these gentle giants. 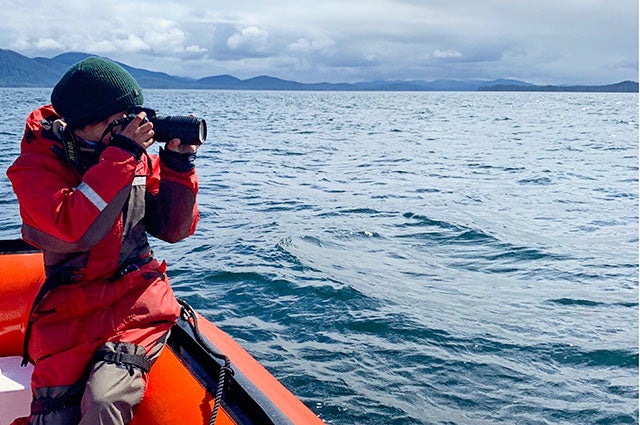 My time in Alaska was extraordinary. The natural world never fails to continue to fascinate and surprise me at every turn. As I resume my route to becoming a wildlife veterinarian, I take these unforgettable adventures from my time with the Alaska Whale Foundation with me—and continue to work towards protecting the incredible biodiversity that fills our blue planet. This exceptional externship opportunity was made possible by Tufts University’s conservation medicine program.

All images were photographed by Anjali Narasimhan during research sampling with the Alaska Whale Foundation obtained under NMFS Permit No. 19703.

Anjali Narasimhan is a 2019 graduate of the Master’s in Conservation Medicine program at Cummings School for Veterinary Medicine. She is now pursuing her D.V.M. at Ontario Veterinary College at the University of Guelph in Canada.