They might be young, but with help from Tufts students, they’re pondering the deep questions of philosophy—and loving it 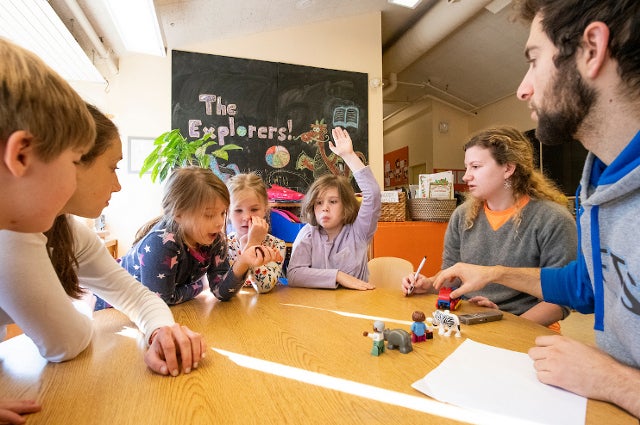 It happens to be World Philosophy Day, this Thursday in late fall, when the K-1 class at the Eliot-Pearson Children’s School holds its sixth and final philosophy class. Four children lean around a small round table, while three Tufts undergraduates balance precariously on tiny chairs.

Melanie Becker, a junior majoring in cognitive science, puts six plastic figures of people and animals and a small Lego train on the table. She lines up five figures to the left of the train, and a zebra figure to the right. Imagine, she says, there are train tracks heading to both sides where the figures are—and that the five figures over here had been told they shouldn’t be on the tracks.

This is the famous trolley problem, first devised as a thought experiment by philosopher Phillipa Foot in 1967, now confronting these five- and six-year-olds. One has a solution: how about switching the “stinky hippopotamus” with the zebra on the right, and have the train run over it? He doesn’t like hippos (“they’re scary”). A girl suggests they move the rabbit to the right instead. A look of disapproval comes over the boy’s face; you shouldn’t do that, he argues—the rabbit is cute.

This leads to a discussion of what’s fair and the consequences of not following rules, the children eagerly chiming in with answers and more-than-occasional silly remarks.

The trolley problem is just one philosophy lesson being taught by the twelve undergraduates in Susan Russinoff’s Philosophy for Children course in the K-1 classroom. One group of undergrads is focusing on optical illusions, while another is reading Derek Munson’s Enemy Pie and talking about what it means to be afraid and to be a friend.

Learning about philosophy at the Eliot-Pearson Children’s School isn’t new—this is the third year in a row that Russinoff’s students have brought their lessons to the K-1 class. That’s fitting for the laboratory/demonstration school, which enrolls children from preschool to first grade and is located in the same complex as the Eliot-Pearson Department of Child Study and Human Development. 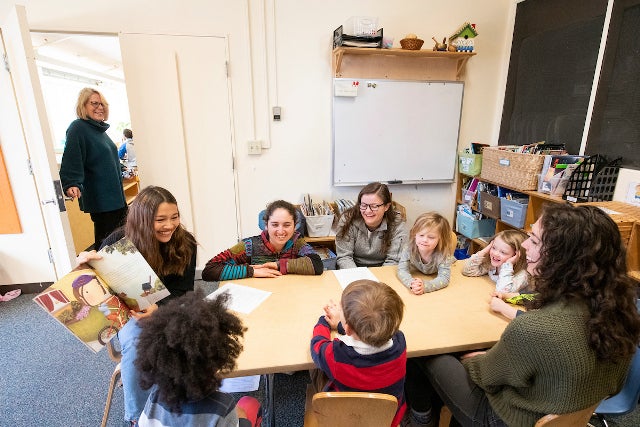 Susan Russinoff checks in on the group reading—and discussing—what friendship means in the book “Enemy Pie.” Photo: Alonso Nichols
They may be little kids, but the students are taking up weighty topics. “Who are they? Will they be the same person when they grow up?” Russinoff asks back in her office. “What’s fair? Does fairness necessarily mean equal distribution of goods or are there other sorts of things that we should take into account? How do we acquire knowledge? Should we trust our senses all of the time?”

These are just some of the critical thinking skills that are introduced and reinforced during the six sessions. And the children seem to be responding. Before the undergrads troop into the bright classroom, an Eliot-Pearson teacher tells them that “the parents tell us that the kids go home and say they really liked their philosophy class” and that the kids “are really excited that you are coming.”

The children are “practicing philosophy,” says Russinoff. That means recognizing that certain questions don’t have definitive answers, answers have to be backed up with reasons, and everyone needs to be open to thinking about other possible answers.

An even a loftier goal “is getting children at a very early age to realize that they can engage in civil conversation and discourse with people who might disagree with them and being able to back up their positions by giving reasons,” Russinoff says. “I think it’s even more important these days to have children be aware that you can have a civil disagreement with somebody.”

Around the trolley problem table, the four youngsters put that into practice, arguing the merits of hippos and rabbits and zebras—even if there is some talking over classmates.

The undergrads are also learning. They develop lesson plans for their work with the children, and workshop them in class. “The class not only improved my own knowledge of philosophy, but also showed me how philosophy is accessible and relevant at any age,” says sophomore Quinn Tucker. “It became obvious that children have thoughts, opinions, and questions that are innately philosophical, nuanced, and mature—and often all they need is someone to engage in these discussions with them.”

Before taking the class, “I had very few ideas as to what ‘doing’ philosophy would mean, both for myself and with children,” says Rachael Totz, a junior majoring in sociology. “The class allowed me to find a teacher within myself and in the kids we worked with, giving our group permission to learn outside the confines of traditional rules for education.”

Back at the trolley problem table, the discussion is turning to bravery. Totz asks the group what that means. One girl talks about how a girl at another school was bullying her. She told the bully it was hurting her feelings, and asked her to stop. That’s what bravery is, a little boy points out, sounding proud of his classmate—and himself.