On the menu: Study says dining out is a recipe for unhealthy eating for most Americans

The typical American adult gets one of every five calories from a restaurant, but eating out is a recipe for meals of poor nutritional quality in most cases, according to a new study by researchers at the Friedman School of Nutrition Science and Policy at Tufts University.

Published today in The Journal of Nutrition, the study analyzed the dietary selections of more than 35,000 U.S. adults from 2003-2016 in the National Health and Nutrition Examination Survey (NHANES) who dined at full-service (those with wait staff) or fast-food restaurants, which included pizza shops and what has become known as fast-casual. The researchers assessed nutritional quality by evaluating specific foods and nutrients in the meals, based on the American Heart Association 2020 diet score.

Notably, the authors found that less than 0.1 percent – almost none – of all the restaurant meals consumed over the study period were of ideal quality.

“Our findings show dining out is a recipe for unhealthy eating most of the time,” said Dariush Mozaffarian, senior author and dean of the Friedman School. “It should be a priority to improve the nutritional quality of both full-service and fast-food restaurant meals, while reducing disparities so that all Americans can enjoy the pleasure and convenience of a meal out that is also good for them.”

The researchers also looked at the extent to which Americans relied on restaurants during the study period and found:

The researchers assessed specific foods and nutrients in restaurant meals and identified priorities for improvement. “We found the largest opportunities for enhancing nutritional quality would be adding more whole grains, nuts and legumes, fish, and fruits and vegetables to meals while reducing salt,” said first author Junxiu Liu, a postdoctoral scholar at the Friedman School. She noted the study findings showed no improvement in sodium levels in fast-food meals and worsening levels in full-service dishes consumed.

“Our food is the number one cause of poor health in the country, representing a tremendous opportunity to reduce diet-related illness and associated healthcare spending,” Mozaffarian said.  “At restaurants, two forces are at play: what’s available on the menu, and what Americans are actually selecting. Efforts from the restaurant industry, consumers, advocacy groups, and governments should focus on both these areas.”

NHANES participants are representative of the national population and completed at least one valid 24-hour dietary recall questionnaire from nine consecutive cycles of NHANES between 2003-2016, including types of foods and beverages consumed and the source.

The study authors used the American Heart Association (AHA) diet score to assess meal quality, which is based on the AHA 2020 Strategic Impact Goals and is a validated risk factor for cardiovascular and metabolic outcomes. The AHA diet score includes both a primary and secondary score. The primary score assesses the consumption of fruits and vegetables, fish/shellfish, whole grains, sodium, and sugar-sweetened beverages, and the secondary score assesses intake of nuts/seeds/legumes, processed meat, and saturated fat.

Limitations of the study include the fact that self-reported food recall data is subject to measurement error due to daily variations in food intake. Participants may also overreport or underreport healthy or unhealthy foods due to social desirability perceptions.

This study is a part of the Food Policy Review and Intervention Cost-Effectiveness (Food-PRICE) research initiative, a National Institutes of Health-funded collaboration led by researchers at the Friedman School working to identify cost-effective nutrition strategies to improve population health in the United States.

Additional authors are Colin D. Rehm at Albert Einstein College of Medicine and Renata Micha at the Friedman School at Tufts University.

This work was supported by awards from the National Institutes of Health’s National Heart, Lung, and Blood Institute (R01HL130735) and a postdoctoral fellowship from the American Heart Association. The content of this announcement is solely the responsibility of the authors and does not necessarily represent the official views of the National Institutes of Health. Please see the study for conflicts of interest. 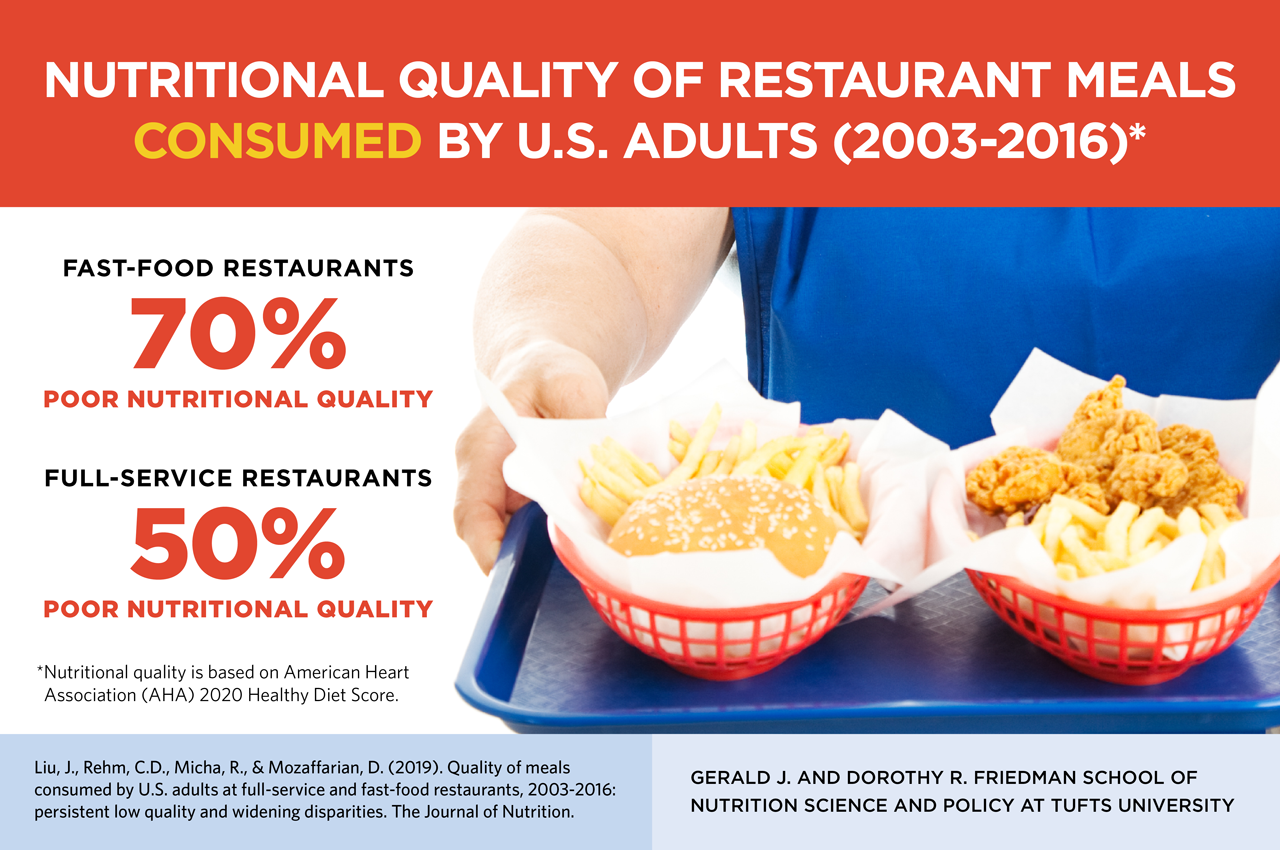