Trying to Figure Out the Scoop on Poop

Cases of diarrhea that once would have been fatal are responding to fecal transplantation. Now Cummings School researchers are working to identify exactly how this procedure can help horses 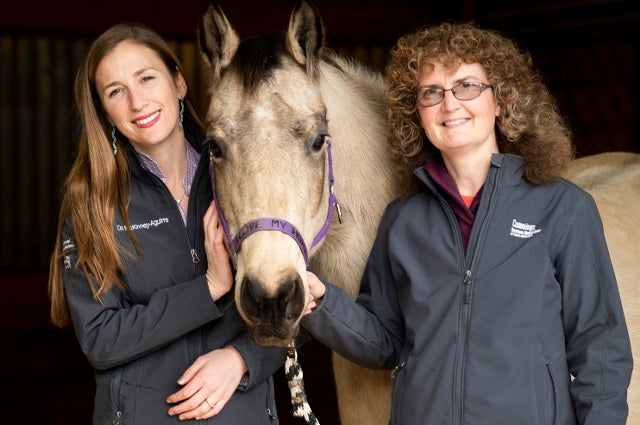 For most humans and animals, diarrhea is an uncomfortable but minor problem. However, in horses, diarrhea can more easily turn deadly—killing some 25 to 30 percent of affected animals. That’s because horses often lose a large volume of fluid and are extremely sensitive to toxins that come from bacteria in their gut, said Caroline McKinney, V16, MPH16, an internal medicine resident at Tufts Equine Center.

Now an experimental treatment borrowed from human medicine has appeared so promising in helping horses with diarrhea that it has become standard practice at Cummings School.

In the therapy—called fecal microbiota transplantation (FMT)—veterinarians take manure from a healthy donor horse and put it in the gut of the horse with diarrhea. Although exactly how FMT works has yet to be determined in veterinary or human medicine, the hypothesis is that it repopulates a patient’s depleted gut bacteria to restore its natural species richness—normalizing the gastrointestinal microbiome.

This internal ecosystem is made up of hundreds of species of bacteria, fungi, and protozoa that work either for or against our health. Indeed, the variety of flora in the gut is one of the things that makes treating diarrhea so tricky, especially when it’s related to bacterial overgrowth: antibiotics, which are typically used in the fight against bacterial infections, kill off many bacteria, beneficial and harmful bugs alike. That “can exacerbate and prolong the course of diarrheal disease, and it may even contribute to antibiotic resistance down the road,” McKinney explained.

Scientists reason that adding healthier, more diverse microorganisms to the gut helps rein in any diarrhea-causing bacteria, and research supports this view. In a systematic review of its clinical use in people, fecal transplants cured upward of 80 percent of antibiotic-resistant infections caused by Clostridium difficile, a potentially deadly diarrheal superbug.

Versions of fecal transplants have been practiced in human medicine—and even for animals—for a long, long time, McKinney said.

“Eastern medicine has been doing a form of fecal transplant for centuries” in people, she said. “And young foals instinctively eat mares’ manure to establish their gut flora.” Veterinarians also routinely perform another kind of gut-flora transplant in ruminant species such as cows, alpacas, and sheep. Cummings School keeps a donor cow, named Annabel, to treat sick animals in this way. 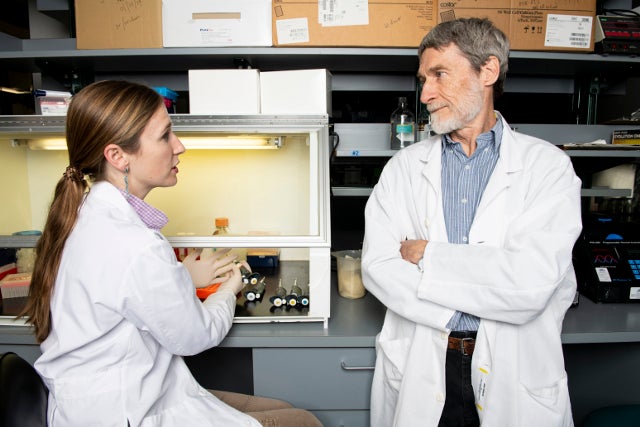 Veterinarian Caroline McKinney, left, works with molecular biologist Giovanni Widmer, whose lab is conducting genetic analyses to see how fecal transplants affect sick horses’ gastrointestinal microbiome. Photo: Alonso Nichols
For the treatment in horses, about two pounds of manure is collected from a healthy donor horse—one that’s been carefully tested for parasites or any concerning bacteria or viruses. It is then mixed with a few liters of water to create a “poop soup,” as the hospital staff laughingly call it. The liquid teeming with microscopic life is then delivered into the sick horse’s gut via a stomach tube that goes through the nose.

The clinical success of FMT at Tufts Equine Center was first evaluated in 2017, using a small retrospective study conducted by Professor Melissa Mazan, V93. Based on favorable results, McKinney said she became interested in FMT during the first year of her residency at Tufts Cummings School, a leading academic training and research center in New England.

Veterinarian Sophie Sage, the senior resident there at that time, was also a proponent of the treatment.

“Together, we became known in the hospital as the ‘poop queens,’” McKinney said.

Although the clinical impression at Tufts Equine Center is that fecal transplant is effective in treating horses with diarrhea, its clinician-scientists wanted to look closer into the effects of fecal transplant on the gut of treated horses. So Cummings School researchers decided to see if it was possible to document the effects and mechanisms of this therapy.

The research was led by Associate Professor Daniela Bedenice, a specialist in large-animal medicine and emergency and critical care, and Professor Giovanni Widmer, a molecular biologist who was the first to sequence the genome of Cryptosporidium, a waterborne bacterium that causes diarrhea in humans and animals.

“This a truly collaborative project in that we couldn’t conduct such a study without each other’s expertise,” Bedenice said. “As clinician-scientists at Tufts Equine Center, we know which questions we’d like to answer to advance patient care, because we are faced with life-threatening illness in horses every day. While we rely on the entire hospital team for our animal work, Giovanni was our go-to specialist when it came to microbiome analyses.”

In a small pilot study, horses with diarrhea were treated with three consecutive daily fecal transplants. Widmer and Ph.D. student Bruno Oliveira conducted genetic analyses on fecal samples taken from the horses before and each day after being treated with FMT. They analyzed samples from the healthy donor horses as well.

Although successful FMT treatment does not necessarily result in the donor and recipient horses’ microbiomes becoming exactly the same, “there appears to be a relationship between the type of bacteria repopulating the gut in treated horses and the fecal bacteria that the donor has given them,” Bedenice said. Analysis of the bacterial DNA from the stool of the patients whose diarrhea resolved after FMT showed that the microbiota changed to more closely resemble the donor's bacterial community.

The study results have since been presented at the Havemeyer Workshop on Acute Colitis in the Adult Horse and submitted to a scientific journal for peer-review. (Editor's note: In March 2020, the study results were published in the scientific journal PLOS ONE.) The Cummings School researchers say they’re particularly interested in investigating the potential for using the “good” species of bacteria associated with resolution of diarrhea as a probiotic.

In a follow-up study—funded as a Resident Research Award by the American College of Veterinary Internal Medicine—the team now is looking at the effects of fecal transplant in a larger population of horses. They seek to establish whether this treatment helps normalize both clinical signs and the type and diversity of gut bacteria found in horses with diarrhea. The researchers also plan to compare serial samples taken from horses being treated with FMT at Tufts and samples from horses seen for colitis at the Oregon State University, where FMT is not in routine use.

Treating a horse with diarrhea can be expensive, McKinney said. Therapy often requires large volumes of IV fluids, and horses must be isolated from other patients at least until communicable causes have been ruled out. Sometimes horses must remain in an isolation unit until their condition completely resolves, given the risk of contaminating equipment used for other animals.

When horses stop having diarrhea after fecal transplant, “it’s such a thrill to be able to call their owners and say they don't have to be in full isolation anymore, which is an additional weight off their shoulders and also less costly,” McKinney said.

That’s why Bedenice said that “even though the concept of FMT treatment and research can initially be a ‘bit hard to digest,’ the research is “so rewarding.”