Australian wildfires have created dangerous stress for wildlife, a harbinger for increasing pressures on animals due to climate change

As climate change-related drought fanned catastrophic wildfires across Australia, claiming lives, homes, and farms, the richly diverse flora and fauna took a tragic toll. The World Wildlife Fund estimates that more than one billion animals have been killed, including thousands of koalas, kangaroos, wallabies, kookaburras, and cockatoos. Many thousands more are injured and homeless—and under deep stress.

Biology professor Michael Romero, a leading expert on the stress response in wild animals, recently spoke with Tufts Now about how animals cope with the ravages of wildfires on such an unprecedented scale—and the impact of climate change going forward.

Even those rescued from the fires face grave difficulties. “We know that captivity creates an enormous amount of stress on animals , but you can heal them enough so that they can be re-released,” said Romero.

Romero is co-author of Tempests, Poxes, Predators and People: Stress in Wild Animals and How They Cope, and noted in that book that human-induced environmental change “is shaping up to be the preeminent challenge for environmental scientists in the 21st century.”

Tufts Now: How much stress do wildfires like those in Australia put on wildlife?

Michael Romero: First, it’s important to recognize that wildfires, when they occur naturally, can be beneficial. They can help forests rejuvenate, and the new growth that results is highly nutritious. Fires run through many habitats, maybe not on a yearly basis, but certainly on a decade basis, and give animals a chance to adapt and recover. 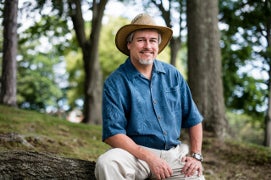 “If there is no refuge, the animals simply can’t come back and recolonize,” said Michael Romero. “This is the challenge we face now as natural habitats are destroyed by calamities like oil spills and natural disasters, or simply are overtaken by humans.” Photo: Alonso Nichols
The difference we’re seeing in Australia is intensity, because increased temperatures are compounded by a decade of drought. You put those two things together—excess temperature earlier in the season and a long-standing drought—and what might have been a regional fire is happening on a much broader scale. The fires become quickly catastrophic.

Now animals face the extreme stress of having to cope with a greatly degraded habitat. They experience stress as refugees—and just like people do. They go into survival mode.

How do animals respond to extreme wildfire stress? What are their options, if any?

The animals in the path of the bushfires have three outcomes. One is that the fire just kills them, and that’s a tragedy, especially for more endangered species. The second is that animals are gravely injured. If you leave them out in the wild, they’re almost surely going to die. These are the ones that rehabilitators pick up and bring into captivity to be rehabilitated.

We know that captivity creates an enormous amount of stress on animals, but you can heal them enough so that they can be re-released. For a lot of the iconic species, like koalas, and species that aren’t doing really well in their ranges, that is an easy calculation. You’ve got to bring them in, you’ve got to help them out as best you can.

And then the third class of animals are those that survive without a whole lot of intervention; reptiles, for instance, can adapt better because they don’t need food and water every day.

What if there no refuge for the animals to come back to after they heal?

If there is no refuge, the animals simply can’t come back and recolonize. This is the challenge we face now as natural habitats are destroyed by calamities like oil spills and natural disasters, or simply are overtaken by humans. This is a big shift in how we scientists think about wildlife survival.

In geologic time, any kind of environmental change or climate change wasn’t necessarily a problem—they happened slowly, giving species time to adapt and evolve. That meant animals could migrate and continue moving to places that contained the best habitat for them. Humans have made that migration increasingly impossible. It’s now quite likely that even if an animal tries to migrate,  it will be killed or starve because either a better habitat no longer exists or there is an insurmountable barrier, like a highway.

In the past you’ve looked at the stress response in animals like marine iguanas living in the Galapagos Islands, specifically at how they secreted the stress hormone corticosterone after the 2002 El Niño brought drought and starvation. Has climate change had an impact on your plans for ongoing research?

We have a pending grant proposal to work in Australia—not in the areas that are currently affected by fire—looking at how much heat certain birds can take before they start to get into physiological trouble, being unable to regulate their temperature.

There are all kinds of reports over the years of animals, especially of birds, succumbing to dehydration. Budgerigars, for example, (popular as pets—called budgies—but wild in Australia) seem especially vulnerable. One of the things that we’re hoping to study is which species can cope better.

Pigeons and doves actually will flutter their gular skin on the necks. They basically vibrate it and use the water to evaporate and cool themselves down. Other species don’t do that. Instead they change the ability of their proteins to cope with a higher temperature. Some sparrows and budgerigars are supposed to be able to do that.

Why should people pay attention to what’s happening in Australia?

At lot of people are thinking there’s a “canary in the coal mine” aspect to this event tied to climate change, which we know is dramatically changing ecosystems around the world. So absolutely, we should pay attention to the millions of animals that are being killed, injured, and profoundly stressed in Australia.

Animals feel stress in the same way we do as humans. Their situation is not fundamentally any different than having your island home completely underwater, which is predicted for a lot of the Pacific Island nations. All those people are going to have to move, too.

What is your perspective on climate change and on its threats to global biodiversity?

I listened to a talk by a meteorologist a number of years ago that had me really worried. He said that there are about half a dozen or more climate models that come to similar conclusions about what’s going to happen with temperature. But he also pointed out that temperature isn’t nearly as important as water to living creatures. As the planet gets hotter, you’re going to see changes in the patterns of rainfall.

So while climate models may coalesce around similar answers with temperature, at least at that time they did not agree when it comes to predicting changes in rainfall. We don’t have any idea what’s going to happen regarding changes in rainfall in different areas of the world, much less this country.

And that’s what will really impacts the animals. If you could have the amount of water falling in an area be devasting like it was in Houston this past September, or you could have no rain falling where it usually does. And that could change an area like the wheat belt in the Midwest into something that resembles the deserts of Arizona.

But again, the biggest problem with climate change for animals isn’t in day-to-day living. It’s their inability to cope with the extremes. What happens when that hundred-year heat wave happens every decade, or the every-decade heat wave comes every year? How will animals, and human respond to the stress, physiologically, but also emotionally and psychologically? That’s the question.