They Said Her Admittance Was a Mistake. And Yet, She Persisted.

If she had been even slightly less persistent than she was, Jessie Gideon Garnett might not have been the first African American woman to graduate from the Tufts School of Dental Medicine, which she did in 1919. As it was, when she arrived for registration, the dean of the school took one look at her and declared that her admittance had been a mistake.

“She stood her ground and said, ‘Oh no, here is my acceptance letter,’ ” said her daughter, Ella Garnett, in 2010.

It was just an early chapter in a life of quiet determination, one that would be marked by pioneering achievement and giving back to her community.

Ella Garnett was unsure why her mother chose to apply to dental school, other than to do something different from her two older sisters, both registered nurses. She was one of eleven women, and the only African American woman, in the class of 165 students.

After graduation, Boston’s first Black woman dentist set up shop in a professional building, but patients were hard to come by. She would putter around her office, going in and out of the laboratory, pretending to be busy. “She finally did get one man who was hurting so bad that he sat in her chair, and she helped him out,” her daughter said. “He said, ‘You really are a dentist.’ ” 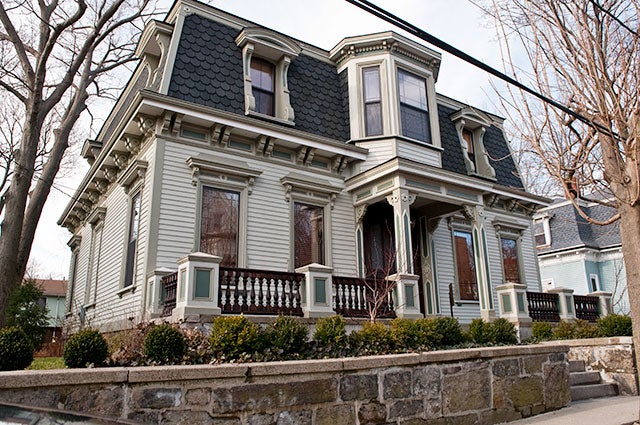 Jessie Gideon Garnett practiced out of her home on Munroe Street in Boston's Roxbury neighborhood. She opened her home to black sorority members and black soldiers during World War II. Photo: Alonso Nichols
Later, as her practice grew, she moved her office to the house on Munroe Street in the Roxbury neighborhood, where she lived with her mother, sisters and two young children. (She and her husband, a Boston police officer, had separated, although they would remarry later in life.)

“Growing up I thought all mothers got up in the morning, put on their white gown, went into an office and worked there for most of the day,” Ella Garnett said. Only later did she realize that very few of the Black women in her neighborhood had professions.

Patricia Carrington was a patient of Garnett’s in the late 1950s. She was fourteen years old when she went to Garnett’s office to have a cavity filled and a tooth pulled. At the time, Carrington didn’t know there were dentists who were women, or Black. “She was a big surprise to me,” she said.

“There was this gentle side to her,” Carrington said, recalling how Garnett talked with her about school, and was sensitive to her fear of the dental chair. “But she wasn’t going to broker any nonsense either.” And when Garnett went to pull the tooth, Carrington felt how strong the short, plump dentist was.

It was only when her mother’s health began to fail that Jessie Garnett, then in her forties, learned to cook and sew. She turned out to be an excellent cook. She was a founding member of the Psi Omega Chapter of Alpha Kappa Alpha, the oldest Black sorority in America, and would entertain pledges with her codfish cakes and blueberry dumplings.

“Every young Black student who joined the AKA had to come to Dr. Jessie’s house,” Ella Garnett recalled. During World War II, the large Victorian house was also an informal stopover for soldiers in the 366th Infantry Regiment, an all-Black unit of the U.S. Army.

But that was not all the house would be known for. Because Boston had few places where Black patients could go for rehabilitation after they left the hospital, the city asked Garnett (who had taken medical courses as part of her dental training) to open her home to convalescing patients. She agreed, and partitioned some of the larger rooms so that as many as sixteen people would stay in the house on Munroe Street, including her family. She eventually built a small office next to the house, at the end of the driveway, so she could continue her dental practice.

By the time arthritis forced her to retire in 1969, Jessie Garnett had spent nearly a half century in dentistry. She was also a member of the NAACP and the Urban League and served on the board of directors of the Boston YWCA, St. Mark’s Congregational Church and Freedom House in Roxbury. She died in 1976 at the age of 79. 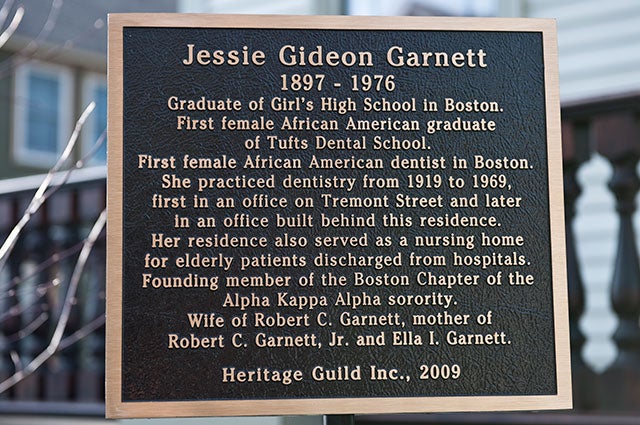 The Heritage Guild placed a plaque at Garnett's home recognizing her contributions to the city. Photo: Alonso Nichiols
In November 2009, Garnett was honored by the Heritage Guild, an organization that documents and promotes the historical significance of prominent African Americans in the Boston area. Her house at 80 Munroe Street, where she welcomed so many people, now bears a plaque recognizing her contributions.

“I was extremely pleased that the Heritage Guild honored the remarkable achievements of Jessie Gideon Garnett, and that I had the opportunity to meet her family,” said Lonnie H. Norris, DG80, then dean of Tufts University School of Dental Medicine, who attended the ceremony. “I can only imagine the courage and confidence she had in being the first in so many professional endeavors in the early 1900s.”

“She smiled a lot and had a sense of humor,” said Heritage Guild President Adelaide Cromwell, who met Garnett in her later years. But overall, “she was a very quiet, unassuming woman. You wouldn’t have known that she had any particularly assertive role in life.”