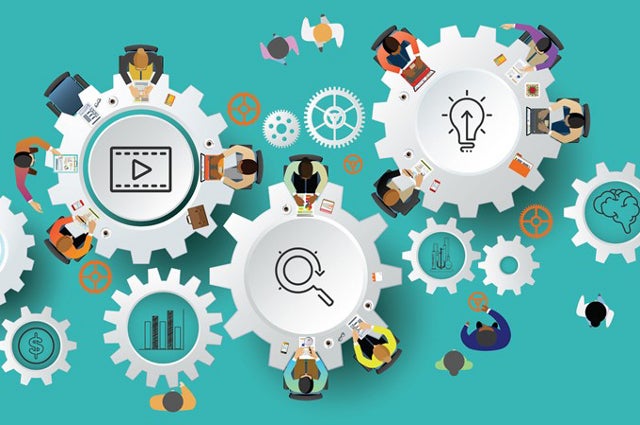 A Tufts team is one of four grand prize winners in the National Science Foundation’s search for big ideas to inform its research agenda for the coming decade.

The competition, named NSF 2026 Idea Machine—that year being the 250th anniversary of the founding of the country—will “inform the U.S. agenda for fundamental science, engineering, and STEM education research,” according to the NSF. The NSF received more than 800 entries, which went through five selection phases. The other three grand prize winners are from Harvard, the University of Chicago, and the University of North Carolina, Chapel Hill.

Matthias Scheutz, a professor of computer science and director of the Human-Robot Interaction Lab at Tufts, and Vasanth Sarathy, a doctoral candidate in computer science and cognitive science, won a grand prize for their project “From Thinking to Inventing.” They will receive $26,000 and are being honored at a ceremony at the NSF today.

“The real prize is the opportunity to promote the progress of science and engineering by helping NSF identify possible new areas of research,” according to an NSF statement. Later this year, the NSF will accept proposals for workshops and Early-concept Grants for Exploratory Research (EAGERs) related to the research themes chosen in the NSF 2026 Idea Machine competition.

In their submission, Scheutz and Sarathy focused on the question, What can machines invent and how? When faced with new problems, humans can improvise to come up with solutions, inventing new ways of using existing materials. Can machines do that, too?

Watch the video made by Matthias Scheutz and Vasanth Sarathy describing their proposal for the Idea Machine competition.

“Resilient humans find ways to make things work, even when the cards are stacked against them—improvising and creatively solving problems with the resources they have available,” said Scheutz. “One of our main goals in the HRILab is to endow robots with similar resilience to make them fit for long-term autonomous operation—such as in assistive care or space settings. The NSF award confirms that we at Tufts are on the right track.” 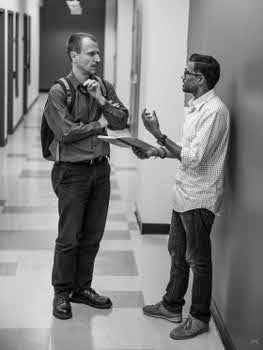 Matthias Scheutz and Vasanth Sarathy confer about their work. Photo: J.P. de Ruiter
“We believe that in light of the social and environmental challenges we witness today, intelligent machines that can creatively solve problems might be our best bet at coming up with solutions,” Scheutz added. “Tufts will thus continue to take a leadership role in developing cutting-edge artificial intelligence and robotics technology that is ethical, benevolent, and safe for humans.”

“Professor Scheutz’s HRILab has been at the forefront of research into artificial intelligence, teaching robots to think like and interact with humans in constructive ways,” said Jianmin Qu, dean of the School of Engineering at Tufts and Karol Family Professor.

“The work is extremely important, and he and Vasanth are to be commended for making a convincing case to the NSF about the importance of this work for the future of our society and environment,” Qu added. “It’s another example of how Tufts is taking a leadership role in shaping how the world thinks about and solves its greatest challenges.”

“Winning this competition means we have a unique opportunity to help inform the national research strategy and lead the conversation about the next generation of scientific research,” said Sarathy. “We hope that the NSF will be able to invest money in researching how we can build creative problem-solving machines and better understand our own human intelligence.”

Machines are already “great at crunching data and learning patterns, but cannot adequately improvise, handle novel situations, or find creative solutions to seemingly unsolvable problems,” Sarathy added. “These are all capabilities we need from machines, now more than ever to help us tackle some of society’s most pressing problems like climate change, wealth inequality, and rising health-care costs.”