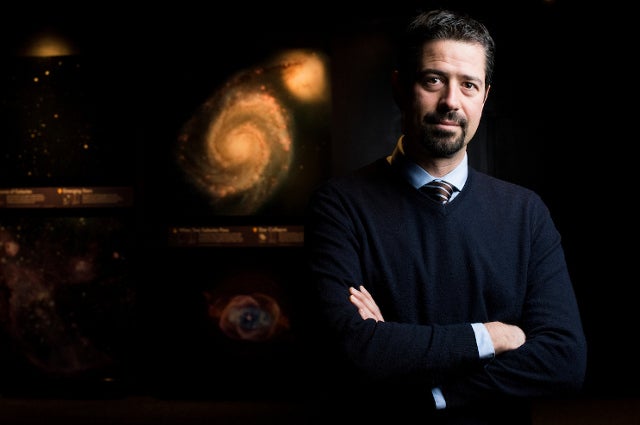 An international team of astronomers—including Tufts professor of physics and astronomy Danilo Marchesini and postdoctoral researcher Marianna Annunziatella—has discovered a supersized galaxy about six times the mass of the Milky Way that existed twelve billion years ago.

The galaxy, which astronomers named XMM-2599, formed stars at a high rate, but had already shut down star-making by the time it was observed. The finding was reported in The Astrophysical Journal Letters.

In a universe replete with strange phenomena and objects, XMM-2599 stands out. It is unusually large not only in terms of galaxies in the current universe, but particularly so for galaxies of the early universe.

“In general, early-formed galaxies should be smaller in mass, because the current model of structure formation is hierarchical—small, low-mass galaxies would be expected to form first, and then they would merge to form bigger more massive galaxies at a later time,” said Marchesini. Newly discovered very massive galaxies, like XMM-2599, found in the young universe, he added, “have forced us to revise the theory.”

The research team found that XMM-2599 formed more than 1,000 stars a year at its peak of activity—an extremely high rate of formation. By comparison, the Milky Way forms about one new star per year.

“What makes XMM-2599 so interesting, unusual, and surprising is that it is no longer forming stars, perhaps because it stopped getting fuel or its black hole began to turn on,” said Gillian Wilson, professor of physics and astronomy at University of California Riverside, who led the study in collaboration with Tufts and other institutions.

A galaxy that large would be expected produce stars for many more billions of years. Wilson notes that the unusual evolution of XMM-2599 will again force astrophysicists to “call for changes in how models turn off star formation in early galaxies.”

The team used spectroscopic observations from the W. M. Keck Observatory’s powerful Multi-Object Spectrograph for Infrared Exploration, or MOSFIRE, to make detailed measurements of XMM-2599 and precisely quantify its distance.

“We identified XMM-2599 as an interesting candidate with imaging alone,” said Annunziatella.  “We used Keck to better characterize and confirm its nature and help us understand how monster galaxies form and die.”

The Spitzer space telescope infrared array camera, or IRAC, also played a key role in the discovery. “The data from IRAC allowed us to sample longer wavelengths—3.6 and 4.5 microns—and in the very young universe we are looking at, this wavelength range is very important to better estimate the stellar mass and level of star-formation activity,” she said.

Unfortunately, the Spitzer telescope was recently retired after sixteen years in service, resulting in the lack of observing facilities to study distant galaxies at these long wavelengths over large areas of the sky.

Marchesini and his collaborators are eagerly waiting for the launch of the James Webb Space Telescope (JWST), currently scheduled for March 2021, to perform new transformative and exciting studies of galaxies like XMM-2599. Even further in the future, the Origins Space Telescope represents the true successor replacement of Spitzer, but this will have to wait until at least 2035, said Marchesini.

In the meantime, though, Marchesini and his collaborators have been awarded more time at the Keck Observatory to follow up on unanswered questions prompted by XMM-2599.