Bringing the Incarcerated Millions into View 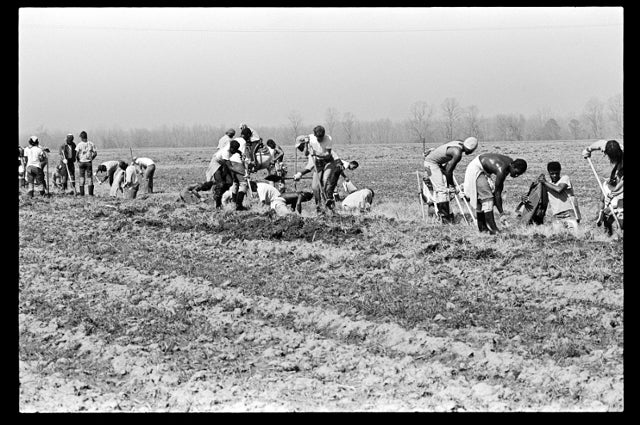 For most people moving through their daily lives, the 2.3 million Americans who are incarcerated are essentially invisible—as is the country’s criminal justice system that places them behind bars.

More people in the U.S. per capita are in prison than any other country in the world—698 per 100,000, according to a 2019 report from the Prison Policy Initiative. Within those numbers reside a complexity of issues that range from racial profiling and police shootings to for-profit prisons and demoralizingly high rates of recidivism.

A new exhibit at Tufts University Art Galleries, featuring works by more than thirty artists, aims to expose and explore this reality through an extensive collection of multimedia work. The show, Walls Turned Sideways: Artists Confront the Justice System, is on display through April 19.

Martin Wong, “47-04,” 1992, acrylic on canvas. Photo: Courtesy of the estate of Martin Wong and P.P.O.W
These are just a few photographs in the show’s opening multimedia installation, Degrees of Visibility. For this work, artist Ashley Hunt traveled to 250 facilities across all fifty states and four U.S. territories, capturing images from the nearest public road where people go about their daily business without necessarily taking in what’s going on around them.

“Walls Turned Sideways recognizes that images and visibility are inherent to the process of social mobilization, and that artists are particularly adept at visualizing, materializing, and deploying purposefully veiled histories,” said the show’s curator, Risa Puleo.

Social mobilization is Puleo’s goal for the show, she says in its catalogue. Puleo drew the title of her show from political activist and academic Angela Davis, who wrote, “Walls turned sideways are bridges.” In choosing this quote, Puleo suggests the intent to figuratively dismantle prison walls in order to access what’s inside and to affect change.

For an exhibition of activism, though, the show is almost serene at first glance. No protest banners wave in the gallery. A video depicting police detainment and violence—Danny Giles’ dead(air), with its soundtrack of an actual 911 call—can only be heard through earphones. Rather, the power of each work intimately impacts viewers as they move from one piece to the next with deepening understanding.

Most of the artists in the show have a personal connection to their subjects. Some were inmates themselves. Many worked closely with inmates or ex-convicts to document their experiences in the art. Puleo herself began assembling the exhibition in 2013 after a member of her family was arrested in her home state of Texas, where the show debuted in 2018 at Contemporary Arts Museum Houston. 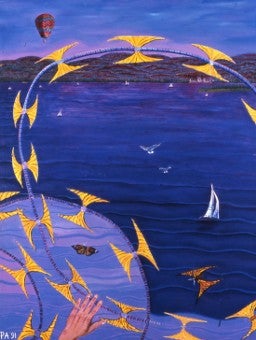 Anthony Papa, “Metamorphosis,” 1991, Mixed media on canvas. Photo: Courtesy the artist
One artist, Anthony Papa, was sentenced to fifteen-years-to-life for a first-time, nonviolent drug offense and leveraged an early release through an exhibition of his paintings at the Whitney Museum of American Art.

His trio of vibrant paintings, Nightmare of Justice, After the Whitney and Metamorphosis, depict his journey from captivity to freedom, as his palette moves from dark hues to light, from prison bars to clouds, butterflies, and a hot air balloon in flight.

The trio work together as a triptych of possibility for one individual, hanging in stark contrast to others in the show—and mostly in life—who aren’t so fortunate to have Papa’s talent or opportunity.

Moving Through the Criminal Justice System

The exhibition is divided into two sections. The introductory section analyzes the prison as an institution, its place in our society, and its relationship with other institutions, such as museums or hospitals. The second and largest part of the show explores how people move through the criminal justice system, experiencing profiling, arrest, processing, incarceration, and exit through reentry into society—or death.

Near the entrance hang a set of graphs by artist Andrea Fraser. Index depicts the divide between rich and poor increasing at the same rate as the price of art has gone up. Index II shows a 700 percent increase in prisons and museums built in the U.S. since 1980.

A little further into the gallery, a military-style police uniform, complete with 92F Beretta handgun, baton, handcuffs, and badge, made to fit an officer standing seven feet four inches tall, towers above its viewer. Artist Chris Burden constructed L.A.P.D. Uniform to display the power of authority in relationship to those it dominates. The effect would be even more intimidating with its entire fleet of thirty uniforms, as originally exhibited.

Around the corner, the artist Maria Gaspar’s immersive installation, Haunting Raises Specters (By A.G.), invites the viewer to step into a curtained, floor-to-ceiling space. Printed on its sheer enclosure is an image of the entire north facing wall of Chicago’s Cook County Jail.

From each wall, videos depict nuanced and disturbing portrayals of what is called the U.S. prison industrial complex; they invite viewers to use gallery headphones and enter into each experience more deeply.

Toward the end of the show stands Last Meal by sculptor and death row activist Richard Kamler, who worked as a teaching artist in San Quentin prison. Here, Kamler cast food trays in lead sheeting and plastic, etching each one with the name and death date of the prisoner who asked for it.

Throughout the show’s run, Tufts University Art Galleries and Tufts University Prison Initiative of Tisch College of Civic Life are hosting educational programming aimed at bringing together faculty, students, incarcerated and formerly incarcerated people, corrections staff, and scholars of criminal justice. The goal is to facilitate creative and collaborative responses to the problems of mass incarceration presented so eloquently in this show.

The Tufts Art Gallery is located at 40 Talbot Avenue on the university’s Medford/Somerville campus. Gallery hours are Tuesday through Sunday, 11 a.m. to 5 p.m.. For more information, visit http://artgallery.tufts.edu.