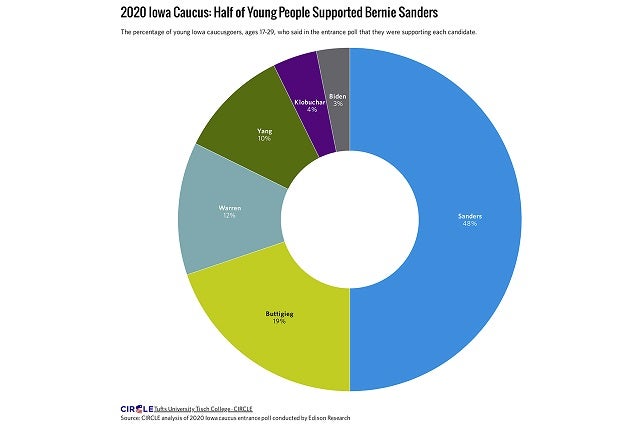 MEDFORD/SOMERVILLE, Mass. (Feb. 6, 2020)–Young people had an extraordinary impact on the first-in-the-nation Iowa caucuses, representing a higher share of the overall vote than in previous caucuses and propelling Sen. Bernie Sanders to one of the top spots, according to a youth turnout analysis released by researchers from the Center for Information & Research on Civic Learning and Engagement (CIRCLE)—the preeminent, non-partisan research center on youth engagement at Tufts University’s Jonathan M. Tisch College of Civic Life. Young people (ages 17-29) turned out at an estimated rate of 8% and made up a 24% share of all caucusgoers, the highest youth share since CIRCLE has been tracking Iowa entrance polls.

Young people strongly backed Sen. Bernie Sanders (48%), followed by former Mayor Pete Buttigieg (19%) and Sen. Elizabeth Warren (12%). Youth support for these three candidates was also highest in our pre-election poll of Iowa youth. These estimates make clear that youth support for Sanders, in particular, and Buttigieg was key to their strong performances in the state; with 97% of precincts reporting, they are locked in a dead heat for the most state delegate equivalents.

“Coming on the heels of remarkable youth turnout in 2018, the 2020 Iowa Democratic Caucus provides more evidence that young people are participating in historic numbers, organizing and making their voices heard,” said Kei Kawashima-Ginsberg, director of Tisch College’s CIRCLE. “While Iowa carries special significance as the first state to hold a caucus, it is important to remember that election results from a single state do not represent the views, preferences, and experiences of all youth across the country. Even so, we can see that young people in Iowa made up a large share of the overall vote and likely influenced the outcome, especially for Sen. Sanders.”

·       Young Iowans made up 24% of all caucusgoers, according to entrance polls, and made up a slighter greater share of the overall participants than the 30-44 age group (21%).

·       We estimate that 8% of youth (ages 17-29) turned out to vote in the 2020 caucuses. Because there was no entrance poll available for the Iowa Republican caucuses, our estimate includes only Democratic caucusgoers and is best compared to previous years in which only one party had competitive primaries. This means that youth turnout doubled from an estimated 4% turnout rate in 2012 and 2004, the last two instances when only one party’s nominating contest was competitive.

·       According to entrance poll data, 48% of young people went into the caucuses supporting Sanders, followed by 19% for Buttigieg, 12% for Warren, 10% for entrepreneur Andrew Yang, 4% for Sen. Amy Klobuchar, and 3% for former Vice President Joe Biden. While we cannot know young people’s final level of support after the in-caucus realignments, it is evident that youth support for Buttigieg and, especially, Sanders, was key to their strong performances in the state.

·       Young people’s influence on the result may have been especially notable given how different their choices were from those of older Iowans: among caucusgoers ages 45+, the top three candidates were Biden (25%), Buttigieg (24%) and Klobuchar (19%). Just as the youth vote helped Sanders and Buttigieg, it likely hurt Biden and Klobuchar, especially given the high youth share of the overall vote. Both were supported by less than 5% of youth, and it appears they will finish in 4th and 5th place in the state.

Primary and general election youth turnout analyses will continue throughout 2020. Please visit circle.tufts.edu for the latest data and research.

CIRCLE is a nonpartisan, independent, academic research center that studies young people in politics and presents detailed data on young voters in all 50 states. CIRCLE is part of Tufts University’s Jonathan M. Tisch College of Civic Life. Recognizing that young voters are diverse in many ways, and that Iowa’s young people are not representative of youth nationally, CIRCLE will also release exclusive polling on youth in Texas and nationally in the coming months.