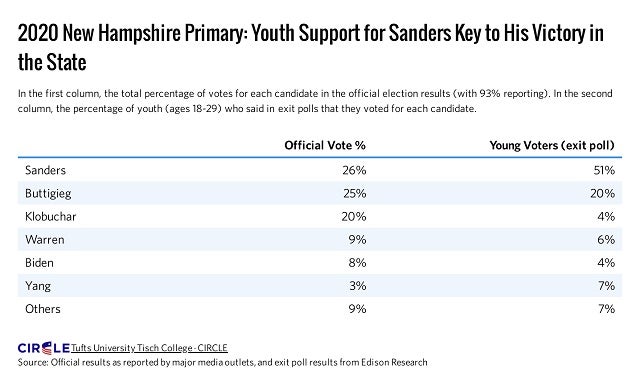 MEDFORD/SOMERVILLE, Mass. (Feb. 12, 2020)—In a very close race in the New Hampshire Democratic primary, young people made the difference for U.S. Sen. Bernie Sanders, according to a youth turnout analysis released by researchers from the Center for Information & Research on Civic Learning and Engagement (CIRCLE)—the preeminent, non-partisan research center on youth engagement at Tufts University’s Jonathan M. Tisch College of Civic Life. Sanders received over 10,000 more votes from young people than second place finisher Pete Buttigieg in a race that was decided by less than 5,000 votes.

Young people (ages 18-29) turned out at an estimated rate of 19%, and made up a 14% share of all Democratic primary participants. They strongly backed Sanders, D-Vermont, (51%), followed by Buttigieg, former mayor of South Bend, Indiana (20%). Other candidates garnered single-digit youth support. These estimates make clear that youth support for Sanders was the key to his narrow victory in the state.

“As we saw in Iowa, and throughout 2018, young people are making a big difference for the candidates they support, propelling Sen. Sanders to the top spot in New Hampshire in a close and highly visible contest,” said Kei Kawashima-Ginsberg, director of Tisch College’s CIRCLE. “It is early in the 2020 process, and the first two states to vote do not represent the demographics of the nation. But it is clear that young people know they are important stakeholders and are motivated to participate, even despite some headwinds in a state that passed a measure that could be confusing to young and new voters.”

CIRCLE is a nonpartisan, independent, academic research center that studies young people in politics and presents detailed data on young voters in all 50 states. CIRCLE is part of Tufts University’s Jonathan M. Tisch College of Civic Life. Recognizing that young voters are diverse in many ways, CIRCLE will continue to release exclusive polling (on youth in Texas and nationally) and analysis throughout the 2020 election cycle. Please visit circle.tufts.edu for the latest data and research.