Taking the Leap into the Startup World—as a Student

Noah Hill, E21, is following his dream of a dental technology business, spawned with fellow Tufts students, all the way to China 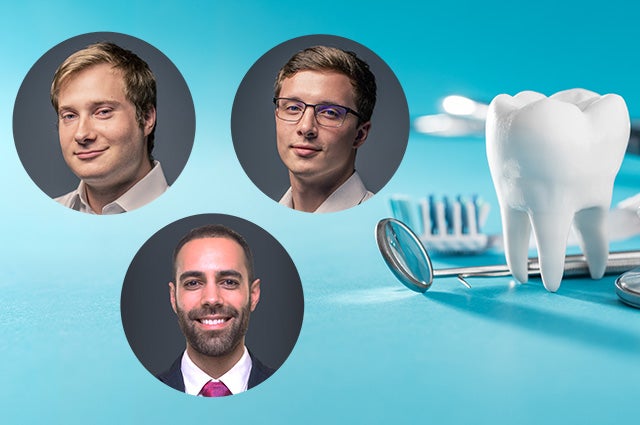 Noah Hill was turning in his physics homework as a first-year student in fall 2016 when he spied a poster advertising a three-day event for Tufts engineering startups.

“I had just come to college, and entrepreneurship was all new to me,” he said. He went to the event, and wound up in a group with two older students, Daniel Weinstein, E18, and Saam Bozorg, D19. They were exploring a small device that would fit inside a person’s mouth and track the nutritional content of what they were eating.

Over the next seventy-two hours, the three bonded over the idea so well that when the event was over, they decided to keep working on the project. “I had no idea what I was getting myself into,” said Hill, E21, a computer science major.

From that chance meeting grew their company UChu Biosensors, a dental technology startup that they hope will revolutionize the way dentists use real-time data to fight tooth decay. The company has shown so much promise that Hill took this year off from Tufts to travel to Shenzhen, China to work on the product at the HAX Accelerator, which provides venture capital and services to develop hardware.

“My philosophy is that college will always be there, but I don’t know if I can be director of software engineering of my own company,” he said. “Worst case scenario, this falls through and I finish my degree; best case, I keep working and can pay for my own tuition.” 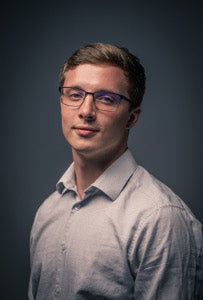 “My philosophy is that college will always be there, but I don’t know if I can be director of software engineering of my own company,” said Noah Hill.
Hill grew up in Tacoma, Washington, where his dad worked for a nearby city’s public works department. Hill tinkered with him in the garage during the weekends. “He would buy old, broken cars on purpose so he could fix them,” said Hill, who developed a love for math and engineering.

It wasn’t until he came to Tufts that he discovered computer programming, first taking a class on it at the Experimental College. When Hill first learned how to program a Raspberry Pi, a palm-sized minicomputer, and made it print on a terminal, “it blew my mind,” he said. “Ever since then, I’ve wanted to program things.”

The three-member team ran with the idea of the diet tracker for more than year before realizing that tracking so many nutrients was too complicated. Bozorg, then a student at the Tufts dental school, had an “aha” moment, remembering how much his professors preached the importance of acidity in tooth decay.

“Acid is to dental health what blood pressure it to heart disease,” said Bozorg. Outside of a twice-yearly checkup, however, dentists have no way to understand what is going on in people’s mouths. “We usually recommend the same thing for each patient—brush and floss twice a day.”

The issue is particularly important for millions of people who are more prone to dental decay, such as those on antidepressants or living with diabetes and cancer, for example. The company shifted its vision toward a device that would attach to a patient’s tooth and continually monitor acid levels, sending an alert to a smartphone if it rose to a critical level. 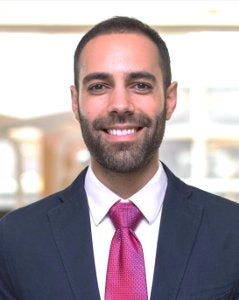 “Acid is to dental health what blood pressure it to heart disease,” said Saam Bozorg.
That would allow a dentist to prescribe a specific toothpaste or mouthwash to bring down acidity. “Ninety-two percent of people will experience tooth decay at some point, and it’s completely preventable,” Hill said.

Over the past two years, the team worked to create a prototype, with Weinstein overseeing the bioengineering, Bozorg the dental science, and Hill the computer programming. Hill’s computer science courses at Tufts became real-time tutorials to create the company software.

“Comp 40 skyrocketed my ability to write code,” said Hill, who at one point was dealing with a software bug for two weeks. “In class, they taught us how to debug assembly code, and within fifteen minutes, I’d fixed it.”

Getting Down to Work

At the same time, the trio was buoyed by the Tufts Entrepreneurship Center, winning its $15,000 Montle Prize and $5,000 Ricci Prize in 2017. That in turn garnered the interest of then–center director Jack Derby and other faculty members, who helped the trio hone their message and connected them with potential funders.

“The science is there, but the guys also have very positive and friendly attitudes,” said Derby, now a lecturer at the Tufts Gordon Institute. “That makes all of us in the center want to do more for them.”

Working at Tufts Launchpad | BioLabs, the team created a proof of concept—a complete working sensor on a mouthguard, and with Derby’s help, began traveling around the country and overseas making a pitch for funding. 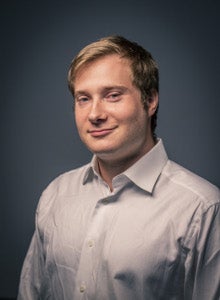 Daniel Weinstein, who traveled with Noah Hill to Shenzhen, where the two worked long days to design the hardware, firmware, server architecture, and web interface.
The team’s drive and persistence are unique among Tufts students, says computer science associate teaching professor Ming Chow, E02, EG04, who taught Hill in Web Programming in spring 2018. Tufts talks about entrepreneurship, Chow said, and now “Noah has gone on to do it.”

With an initial goal of raising $500,000, the company was only able to bring in $291,500 before the opportunity with HAX came along. The accelerator provides companies with $250,000 in venture capital, as well as engineering and marketing teams, to complete their product. The only catch is that they have to move to China to do it.

Hill didn’t hesitate, leaving Tufts this fall to travel with Weinstein to Shenzhen, where the two have worked twelve-to-sixteen hour days to design the hardware, firmware, server architecture, and web interface.

When they are done with the product design, they will then head to Silicon Valley in the spring in hopes of raising $2 to $3 million in seed capital to see the device through the regulatory process. If all goes well, they hope to sell to their first patients in 2021 or 2022.

“The experience has brought out my inner strength and helped me realize what I’m passionate about,” said Hill, reflecting on how far he’s come since that startup event his first year at Tufts. “Whatever you want to do is really possible if you work hard and meet people and leverage the resources that are available.”