Exclusive Polling: Ahead of Super Tuesday, Texans Under 40 Favor Sanders, Biden and Warren 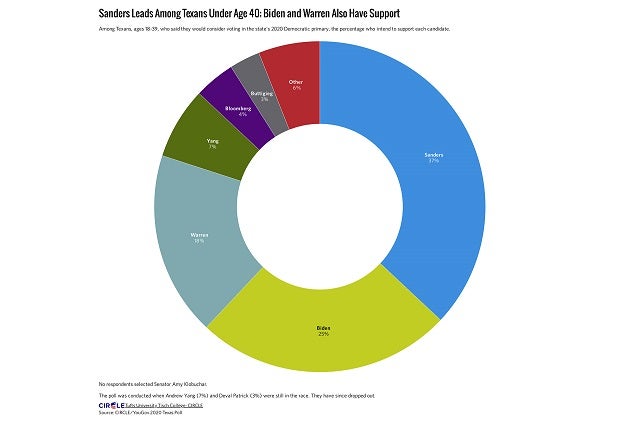 MEDFORD/SOMERVILLE, Mass. (Feb. 18, 2020)–Millennial and Gen-Z voters could be on track for a big turnout in the Texas primary next month, with support in the Democratic primary trending to Sen. Bernie Sanders, former Vice President Joe Biden, and Sen. Elizabeth Warren, according to an exclusive Texas youth poll released today by the Center for Information & Research on Civic Learning and Engagement (CIRCLE)—the preeminent, non-partisan research center on youth engagement at Tufts University’s Jonathan M. Tisch College of Civic Life.

Nearly 40% of Texans under 40 who were surveyed say they are “extremely likely” to vote in the primary on Super Tuesday, which would be a high level of participation for this age group. Our poll also finds that, as with the 2020 primaries and caucuses so far, Sanders is the top choice among younger voters (37%), but other candidates are garnering higher levels of support, especially Biden (25%) and Warren (18%). While interest among younger voters in Texas is high, campaign contact and outreach levels remain low at this point in the election cycle, especially for Latinos.

“There is a lot at stake in the Texas primary on Super Tuesday, including over 200 delegates. And it is clear that mobilization of voters under 40, especially Latinos, will depend on the extent to which outreach increases in the next two weeks,” said Kei Kawashima-Ginsberg, director of Tisch College’s CIRCLE. “The youth vote tripled in Texas from 2014 to 2018, and interest remains high in 2020, but campaigns have a lot of work to do to reach younger voters, get them the information they need to vote, and keep them engaged.”

This new poll was designed by CIRCLE and conducted by YouGov. It surveyed a representative sample of Texas residents ages 18-39 who are eligible to vote, regardless of voter registration status. This survey was conducted January 13-27, 2020 and is based on online responses. The total number of respondents is 500.

CIRCLE is a nonpartisan, independent, academic research center that studies young people in politics and presents detailed data on young voters in all 50 states. CIRCLE is part of Tufts University’s Jonathan M. Tisch College of Civic Life. Young voters are diverse in many ways, and CIRCLE will continue to release exclusive polling and analysis throughout the 2020 election cycle. Please visit circle.tufts.edu for the latest data and research.

Researchers are available for interviews. Media outlets should contact Robin Smyton at robin.smyton@tufts.edu, or 617-627-5392.