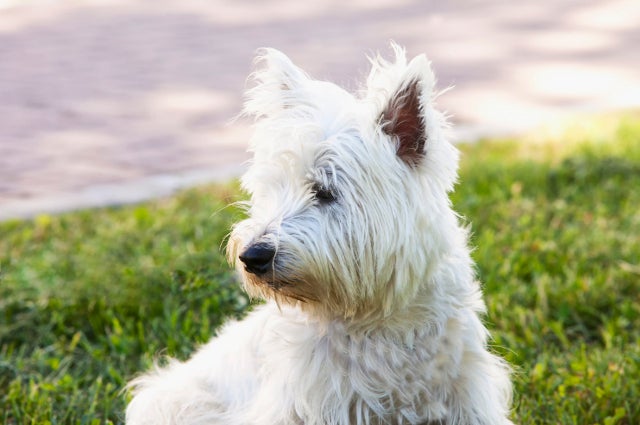 Dan Ackerson realized something was wrong with Baxter in early 2017, when the West Highland white terrier started coughing every morning. “Then the cough became really persistent, sort of a hacking cough-gag,” Ackerson said.

Baxter was diagnosed with idiopathic pulmonary fibrosis (IPF)—that is, pulmonary fibrosis of unknown cause. It’s a lethal and incurable disease, and Westies have long been recognized as uniquely predisposed to it. Like other forms of pulmonary fibrosis, it increasingly thickens—or scars—lung tissue, making it harder and harder to breathe and impairing the heart’s ability to function.

Ackerson had never heard of pulmonary fibrosis. However, as he searched for ways to help Baxter, he came across an online community for owners of dogs with “Westie lung disease.”

There he found not only the support of thousands of other people facing the same diagnosis for their pets, but also news of a clinical trial to be headed by Cummings School associate professor Elizabeth Rozanski.

An emergency and critical care veterinarian at the Henry and Lois Foster Hospital for Small Animals and an expert on respiratory problems in dogs and cats, Rozanski is actually looking beyond the animal world with her trial.

She noted that canine IPF is similar to the same disease in humans and that—even though thirty thousand to forty thousand people in the U.S. are diagnosed with IPF each year—the treatment options for them are almost as limited as for animals.

Only two FDA-approved drugs exist for human IPF, and all they can do is “slow down the progression of the disease and prolong survival by a few months,” Rozanski said. “People tend to live no more than three years after being diagnosed with this disease, unless they receive a lung transplant.” Her hope is that trying out a new kind of therapy on Westies might be a first step toward improving the situation for human and animal patients alike.

A New Look at an Old Drug

The roots of Rozanski’s trial extend back to 2018, when researchers working to cure human IPF became interested in a drug called sobetirome, which was initially developed in the mid-1990s to treat high cholesterol in humans, but never reached the clinic. Sobetirome mimics thyroid hormone, and research in human cells and in mouse models of pulmonary fibrosis have suggested that supplemental thyroid hormones can reverse pulmonary fibrosis.

“If you take a damaged lung cell and expose it to thyroid hormone, there’s a lot of regeneration, and often the lung cell will heal,” Rozanski said. But unfortunately, a “fairly large dose” is required, she added, and “if you give a ton of thyroid hormone, you can cause serious cardiovascular side effects.”

The beauty of sobetirome is that it works like a thyroid hormone, but potentially without causing those side effects. And in both lung cells and in animal models of pulmonary fibrosis, sobetirome seems to have the same antifibrotic effect as thyroid hormone.

Nevertheless, questions remained, and one of them was worrisome enough to get people to consider an unconventional approach to follow-up research. “The problem is that the results that come out of drug studies in mice almost never translate to humans,” said Teresa Barnes, a national advocate for people living with IPF. “As a result, we have close to thirty failed drug trials in pulmonary fibrosis alone.” 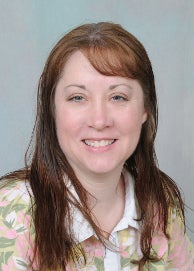 “If you take a damaged lung cell and expose it to thyroid hormone, there’s a lot of regeneration, and often the lung cell will heal,” Elizabeth Rozanski said.
Mindful of those failures, Barnes thought of testing sobetirome on Westies to see if the findings in mice truly held promise. She had learned of the similarity between canine and human IPF back in 2007, when she was invited to participate in the Westie Foundation of America’s first meeting on IPF, in which they brought together researchers in veterinary and human medicine.

She has been on the Westie Foundation’s board ever since—and has even adopted a Westie. And in 2014, she helped the Westie Foundation convene a second, larger Fibrosis Across Species meeting, uniting international veterinary and human researchers to discuss how they might learn from each other. (In addition to Westies, animals such as horses, pigs, and cats also get pulmonary fibrosis.)

No Time to Lose

Barnes—who has lost her father, aunt, and three uncles to idiopathic pulmonary fibrosis—said she has a 50 percent chance of developing the disease. “I have a nine-year-old daughter, and her risk is also fifty/fifty,” she said. “Today, whether you’re a dog or a human, if you contract pulmonary fibrosis, you will die. So I feel a real sense of urgency to do whatever I can to help advance the science.”

That sense of urgency is a lot of what drives her interest in testing sobetirome on Westies: such a trial would be relatively quick. If it met with success, that would be great, but if not, it might at least eliminate the need for a lengthy and doomed human trial.

“My father died of pulmonary fibrosis when I was in college, and that was more than twenty years ago. In all those years, there’s been no change in a patient’s experience with the disease,” Barnes said. “That’s because a human study on pulmonary fibrosis can take anywhere from ten to fifteen years. By comparison, dogs that have naturally developed the disease offer a way to study outcomes within two to five years.”

Moreover, she argued, drug trials on dogs have already proved valuable in other areas of medicine. “If a cancer drug is successful in the canine model, there’s a good chance it is going to be successful in humans,” she said. “They see that at the National Cancer Institute. So this approach is not new; what’s new is its application to pulmonary fibrosis.”

Barnes reached out to Naftali Kaminski, chief of pulmonary, critical care, and sleep medicine and professor of medicine at Yale University School of Medicine—whose group made the discovery that thyroid hormone may have antifibrotic effects—to broach the idea of a sobetirome study in Westies.

Kaminski, an internationally renowned expert in pulmonary fibrosis, was excited. “This is such a great idea,” he said. “We can test it in dogs with the naturally occurring disease and hopefully find an effective intervention for both humans and their canine friends.” But he said he did not know how to conduct a veterinary clinical trial.

“I’ve got you covered,” replied Barnes. She explained to him that through Fibrosis Across Species, she had “gotten to know Liz Rozanski and what a powerhouse she is, with her having done clinical studies on pulmonary fibrosis in dogs and other domestic animals.”

Kaminski signed on, and Rozanski assumed the role of lead researcher. Pairing an expert in human medicine like Kaminski with a veterinary expert like Rozanski meant that an IPF study could be up and running fast—if only it had a little funding. But although canine studies are very inexpensive compared with human studies, none of the researchers’ grant applications were approved.

Then came a surprise. When Rozanski called the Westie Foundation to share the bad news, she discovered that dog lovers would not be so easily deterred. Word about a potential trial had already spread among pet owners desperate for a cure.

And one of them—P.J. Kessler, whose dog Tyler was being treated for IPF by Lindsay Merkel, veterinarian and associate professor at the University of Minnesota College of Veterinary Medicine—offered to step in to help.

“I was all in and committed to raise these funds,” said Kessler, who created a GoFundMe campaign and sold T-shirts to finance a research grant through the Westie Foundation. “Due to the incredible generosity of Westie and a few other breed owners, we exceeded our goal of $30,000 within a few months.”

Tyler lost his battle with IPF in August, at age seventeen. Kessler said she remains committed to finding a cure in his memory.

Meanwhile, the sobetirome research she supported is under way. Launched in October, the six-month pilot trial is enrolling ten Westies at Cummings School or the University of Minnesota. All are receiving the experimental medication daily at home. They’re also undergoing an echocardiogram, a CT scan, and blood work at the outset, halfway mark, and conclusion of the trial.

Baxter, Ackerson’s Westie, was among the first dogs to join the study, but soon afterward, he succumbed to IPF. While Ackerson is devastated, he’s nonetheless grateful to have had the opportunity to participate in the research.

“There is only so much time a person or a dog has to fight IPF,” he said. “Anything we can do to help future Westies and their owners or even humans with the disease is worth doing.”

And Barnes, too, has her eye on the big picture. “If this study is successful and the drug does benefit our dogs, then everybody wins,” she said—adding that even if the results turn out to be a disappointment, “we still win, because this study is the launch of a better model to look at drugs that may help dogs and people at a much earlier stage. To me, what this study represents is hope.”